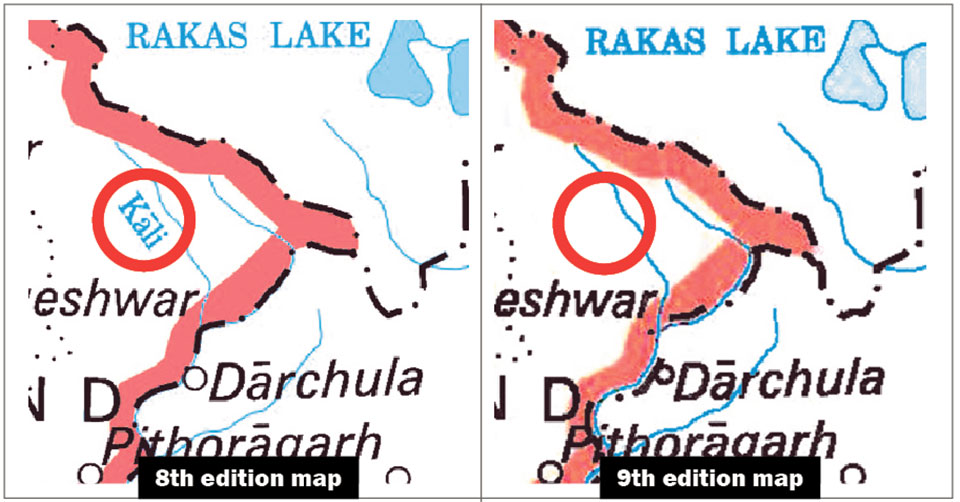 Since India unveiled a new political map incorporating some Nepali territories including Kalapani on November 2, NC and the ruling Nepal Communist Party (NCP) leaders are going an extra mile or two to establish their nationalist credential, while trying to dismiss others as ‘pro-Indians’.

“This patriotic government won’t let anyone take even an inch of the Nepali land. The neighboring country should withdraw its troops from our land,” Prime Minister Oli announced last week. Until then, his government had done little more than issuing a ritual press statement, describing Kalapani as an integral part of Nepal. On Thursday, the Ministry of Foreign Affairs sent a note to New Delhi calling for a bilateral dialogue over the encroached Nepali territories occupied by Indian security forces.

On Saturday, the Kalapani issue gripped the domestic politics once again after NC President Sher Bahadur Deuba, mindful of the upcoming by-elections, alleged that India had released the map in consultation with Prime Minister Oli.

“Oli has betrayed the nation by handing over Kalapani and Lipulekh to India,” Deuba said while addressing an election gathering in Pokhara.  NCP leaders have since intensified a counteroffensive against Deuba, questioning the nationalistic credentials of the four-time prime minister.

“Our voice doesn’t change on the issue of patriotism. They didn’t even utter a word during the [Indian] blockade, not even a meow, why bellow like a wildcat just because it’s election time?  Such an issue should not be used for election victory or loss,” government spokesperson Gokul Prasad Baskota fired back at Deuba during an function held in Pokhara on Sunday.

Using bilateral issues, especially the ones pertaining to India, for political gains is not new in Nepali politics where “the chest-thumping and even outright jingoism” could make or break a party’s political future.

Prime Minister Oli’s aggressive rhetoric against India in the backdrop of the 2015 Indian blockade not only ensured a victory for the left alliance, but also placed him as an indisputable candidate for premiership.

On the other hand, Deuba and NC’s perceived reluctance to speak out against India cost the party dearly in the elections.

The misguided debate and increasing politicization of a sensitive bilateral issue was overshadowing the actual agenda and could even weaken Nepal’s stance in the long run, experts say.

“Nobody should try to make this an election issue or use it as a ladder for their personal gain. It would be in the interest of the nation and the parties if they adhere to an all-party consensus,” said Ratan Bhandari, a border expert who has authored a book on Kalapani.

Kalapani has long been a major bone of contention between Nepal and India.

“The Kalapani area is an old wound that keeps hurting us once in a while,” said Bhandari.

The Sugauli Treaty signed between Nepal and the East India Company, and treaties signed later with Independent India acknowledge the Mahakali River as the boundary between the two countries. “The attempts to alter the map started after 1856 when Nepal and British Raj unveiled a joint map. But India, according to testimonies of locals, is thought to have deployed troops at Kalapani in the 1950s,” said Bhandari.

But India, given the geographic importance of the region, a tri-junction including China, occupied the Nepali territory across the Kali River since the 1960s, describing a lesser-known stream of the headwaters of the Mahakali River as the origin of the river and borderline.

A similar outrage emerged in 2015 after China and India agreed to develop the Lipu-lekh pass, the shortest route to Manasarovar Lake, a highly revered Hindu pilgrimage site in Tibet, as a trade route. Bhandari praised the government for issuing the press statement and sending the note to India, but believes more could have been done such as ‘releasing a counter map and sending a protest letter”.

As the political parties rejoice in mudslinging, the general public are spontaneously coming out to demand the withdrawal of Indian troops from the disputed areas. On Sunday, some concerned citizens including former bureaucrats published a map to counter the Indian map.

“We plan to take the new political map of Nepal to the United Nations as part of our campaign,” former secretary Dr Dwarikanath Dhungel said while speaking at a function organized in the capital to unveil the new map.