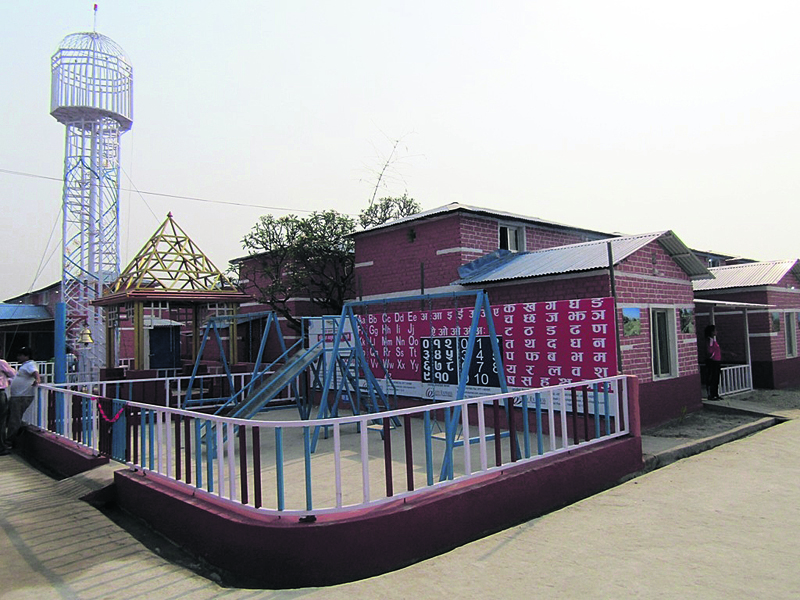 MAHOTTARI, April 15: On Friday, 53 members of the backward Musahar community of Bardibas-1 in Mahottari district received new houses on the occasion of Nepali New Year. Prior to this, the Musahars here were forced to live in temporary shelters following the devastating earthquakes of 2015.

A total of 53 houses in Integrated Model Musahar Settlement constructed in Bardibas were handed over to the community on Friday. The model settlement was constructed by Nepali comedian couple Sitaram Kattel and Kunjana Ghimire, popularly known as Dhurmus and Suntali, through their charity known as the Dhurmus-Suntali Foundation.

The foundation had built the 53 houses in 95 days. Comedian duo Madan Krishna Shrestha and Haribansha Acharya, popularly known as Maha Jodi, handed over the keys of the new houses to Bitula Sada, chairperson of the Integrated Musahar Settlement Protection Committee, amid a function organized at Bardibas-1. Musahars wore cheerful smiles following the handover.

The foundation had collected Rs 50.4 million from donors within and outside the country for the project. Under the project, 53 houses of the same design were constructed. Each house has been equipped with basic necessities –   a toilet, tap fitted water-tank, as well as garden and cylinder-fitted gas-stove.

Likewise, the foundation has provided financial aid of Rs 500,000 to the protection committee for repairing the houses and for cleanliness of the settlements in the coming days.

Comedian duo Shrestha and Acharya, the main guests of the function, said everyone should learn from the inspirational works of Dhurmus and Suntali, who have been continuously working on such projects since the earthquake that left thousands dead and homeless.

Artist Kattel said the he felt very happy for he was able to keep the promise he had made. “With this handover, we have completed a hat-trick in the construction of integrated model settlements. Happiness has spread among the people of Musahar communities. We are able to fulfill their dreams by living up to our words.”

Musahars have long been deprived of basic necessities. Due to lack of education and awareness, they have been forced to live in pathetic conditions. Times and again, they face problems like shortage of food and are forced to live in cold and dilapidated houses during the cold winter days.

CHITWAN, April 2: Bharatpur Metropolitan City has announced that it was providing a land plot to the Dhurmus-Suntali Foundation for... Read More...