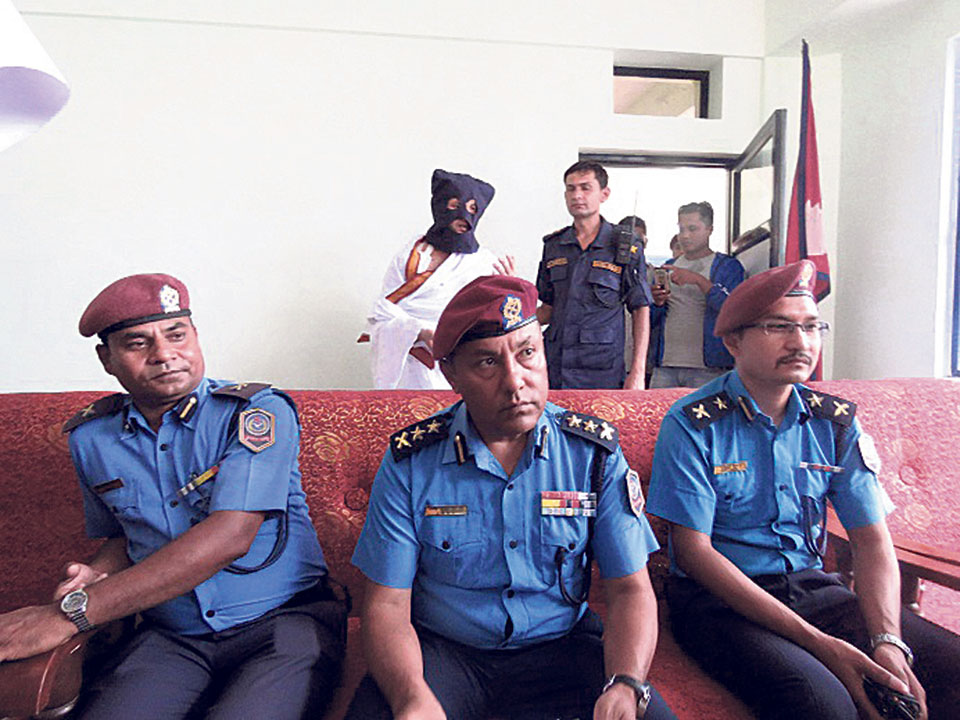 BIRATNAGAR, May 8: A police investigation into the shooting of religious leader Acharya Sriniwas  has shown that the controversial godman had used hired guns to shoot him in the  hands. Police  concluded that Acharya,  who has been campaigning to reinstate a Hindu state, plotted the incident to ‘prove there is religious violence in Nepal’.

Following this conclusion, police arrested Acharya on Monday. Two individuals involved in the incident were also taken under control. The investigations are ongoing .

Acharya was shot on the premises of the Ram Janaki temple at Biratnagar-14 on April 8 while attending a religious function. Following the shooting, protests  erupted across the country. Police arrested youths opposing the return of a Hindu state. The provincial government decided to bear the treatment expenses  for Acharya.

Rastriya Prajatantra Party Nepal, which advocates a Hindu state and ceremonial monarchy, had protested across the country. But those protesting Acharya’s shooting are now in a dilemma, as is the provincial government.   “We have already announced we will bear [his] treatment expenses so it will be an injustice to the hospital if we backtrack now,” said a member of the provincial cabinet, adding, “If we settle the expenses it will give out a negative message that the government has borne the treatment expenses of a criminal.”

The  provincial government will decide on the matter once Chief Minister Sherdhan Rai returns to the provincial capital, Biratnagar. Acharya was admitted at Biratnagar’s neuro-hospital. His treatment expenses stand at Rs 150,000.

According to SSP Arun BC,  chief of District Police Office Morang, Acharya had given a pistol and bullets to  Madhav Chaudhary, 29, of Bharatpur-4 and Laxmiraj Adhikari, 32,  of Gaidakot-5, Nawalparasi and instructed them to shoot him in the hand

“That’s why we have brought him to Biratnagar from Kathmandu,” said SSP BC.  Acharya was arrested in Kathmandu. He reportedly wanted to go to India before his arrest, according to the investigation.

Chaudhary and Adhikari are said to be confidants of Acharya.  “Acharya asked us to shoot him, saying something should be done for religion and the country,” Chaudhary told reporters at the District Police Office.

Asked about the pistol, Adhikari said it had been  with him for a long time and he made it available as requested by Acharya.

Chaudhary, who is now  in police custody, said Acharya was mistakenly shot in the shoulder. “We had planned to shot him in the hand but mistakenly fired at his shoulder,” said Chaudhary, adding, “I did it for country and the Hindu religion, not for money.”

Police have already started investigations into the charge of murder. They, however, are discussing with the Office of the District Attorney what to do about  Acharya.

A preliminary investigation by the police shows Acharya had plotted the murder attempt after a series of movements to reinstate a Hindu state in Nepal turned futile.

Previously, Acharya  had been making controversial statements about religious matters. Also, he had taken initiatives to begin protests in Kathmandu, Itahari of Sunsari and other parts of the country. He  also staged sit-ins.

Acharya, a local of Simara, Bara, was living at an ashram in Baraha Municipality in recent days.

KATHMANDU, Nov 20: The meeting of the Rastriya Prajatantra Party-Nepal held at the residence of party chair Kamal Thapa at... Read More...

Include phrases 'Hindu State' and 'Buddha's Birthplace' in constitution

It can be argued that new constitution has actually upheld the idea of a Hindu state ... Read More...