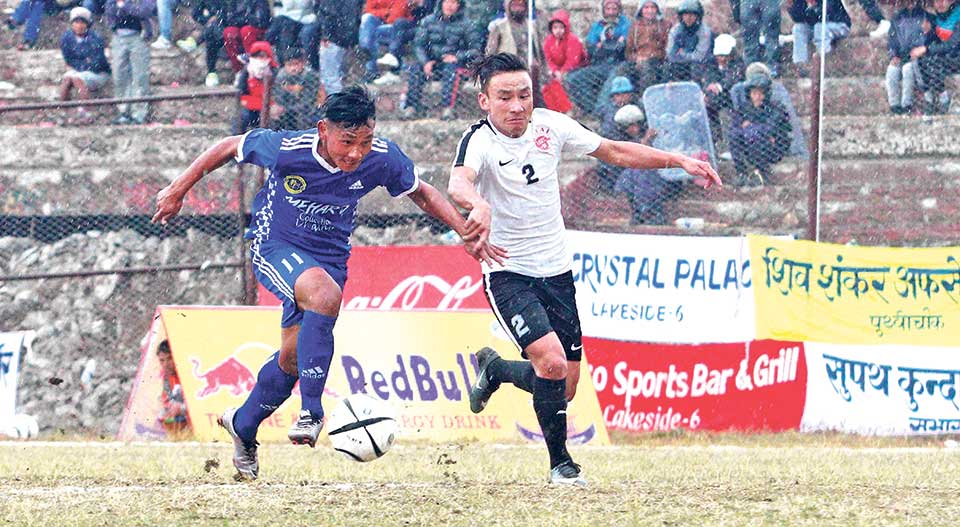 Players of Dharan Football Club (right) and Sikkim United in action during the Aaha Rara Gold Cup football tournament at the Pokhara Stadium in Pokhara on Wednesday. Photo: Umesh Pun/Republica

At the Pokhara Stadium, Roman Limbu scored the opening goal in the 61st minute to give Dharan a lead, converting Bharat Mohan Rai’s shot into goal. Dharan doubled the lead just after two minutes through Saujan Rai. Dhiran Rai scored a header in the 74th minute to seal the win for Dharan.

Sikkim crashed out of the tournament as it failed to convert many chances in front of the goal.

He further added that the absence of senior players, who were in Patana to participate in a tournament, was the reason his team could not get success against Dharan. Sikkim had faced defeat at the hands of the organizer Sahara in tiebreaker in the quarterfinal of the last edition.

Sikkim’s Suraj Chhetri missed many chances to score during the match among which was his two shots that were off target. Also, Pema Lendhup’s shot from 30 yard out in the 26th minute sailed just over the cross bar, while Manos Rai’s shot which came from a Manoj Dharnal pass was easily caught by Dharan’s goalkeeper.

Dharan’s Nishan Limbu was rewarded with the man-of-the-match and was given a cash prize of Rs 5,000.

Dharan’s head coach Ashok Rai said that the win boosted the confidence of the team despite failing to play well.

The tournament, which was started from Tuesday, will conclude on February 3.

Asparagus price reaches Rs 5,000 per kg in local market due to surging demand amid low supply
12 minutes ago