Dhangadhi ready as all eyes on DPL 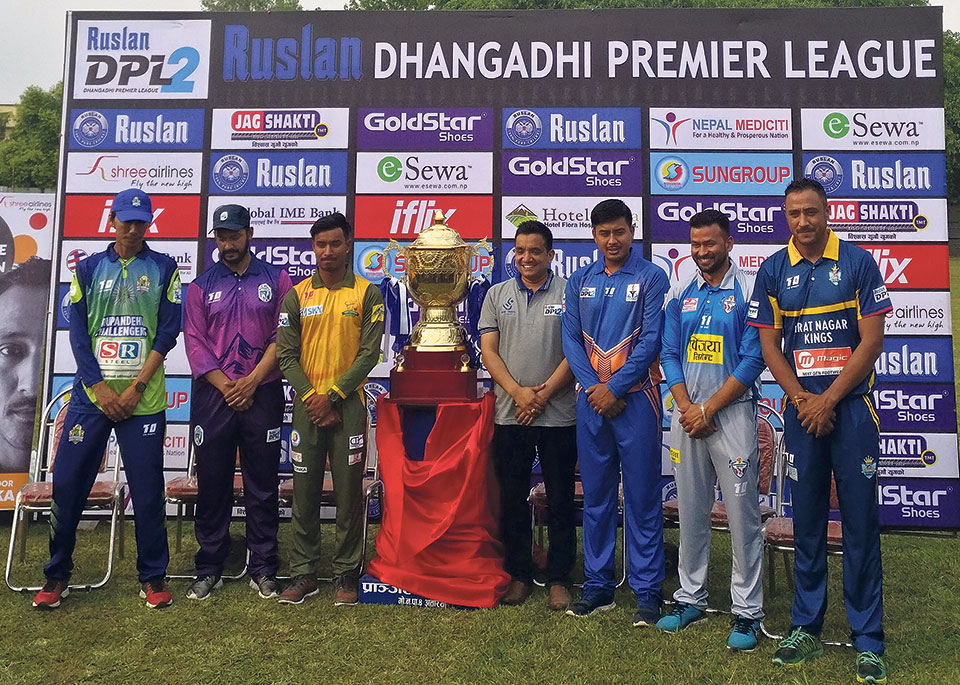 Captains of Ruslan Dhangadhi Premier Leauge franchise pose with the trophy in Dhangadhi on Friday, on the eve of the Twenty20 cricket tournament.

DHANGADHI, March 31: As all the six teams of the Dhangadhi Premier League (DPL) complete final preparations, the cricket championship with the biggest cash prize in the country is set to kick off on Saturday at the Seti Zone Police Cricket Ground.

The defending champion Team Chauraha Dhangadhi and Kathmandu Goldens will face each other in the opening fixture of the Twenty20 cricket tournament that will conclude on April 13.
Highlights of the six teams:

Some shrewd auction strategy by the most successful cricket captain of Nepal Paras Khadka along with the Chief Operating Officer of Cricket Association of Nepal Chumbi Lama combined with the franchise owner and former national cricketer Paras Lunia, the team was the luckiest one when they sat on the auction table bidding for the players they wanted to include in their squad.

Experience is of abundance with the likes of Basant Regmi and Prithu Baskota as well as Manjeet Shrestha who Kings snapped up late in the auction during a draft-pick round. The foreign impetus of power-hitter Babar Hayat from Hong Kong will add venom to the most aggressive looking batting lineup of the tournament.

The young stars like Anil Kumar Sah and Dilip Nath who were part of Nepal’s historic ODI status winning players will add more strength to the squad.

Weakness: They have Avinash Bohora and Ramnaresh Giri as pace bowlers with an added option of Shubham Kamat from Mumbai.

Regmi is the only match winning bowler in the squad.

Sarraf, Sah and Baskota can all roll their arms but they would not possess the wicket taking abilities like a regular bowler. Much will depend on Kings’ batting prowess to take them home in second season of premier league cricket from Dhangadhi.

Probable XI: Nath (W), Sah, Hayat, Khadka, Baskota, Khanal, Regmi, Kamat, Sarraf, Giri, Bohora.
Prospects: Kings looks little light on bowling but the presence of three to four biggest match winners from the tournament shouldn’t be difficult for them to reach the final. They start as the run-away favorites.

The most conservative team from the auctions mainly invested on young and unknown players for the second season for marquee cricket event from the country’s far-western region. The prospect largely depends on the strategic player Dipendra Singh Airee, and the team captain Subash Khakurel, who returned from a long injury lay-off. The money-ball team of the tournament will have to make sure they have strong strategies to counter the lack of star or proven players in the squad.

They can bat deep and have extra bowlers in the playing set covering up any first choice bowler having an off day.

The effective spin twins of Binod Lama, who did well in last DPL, and Suwarnakar Uraw, who topped the Nepal Premier League bowling charts will act as trump cards for CYC. Bhurtel is one of the most explosive batsmen in the country.

Weakness: Lack of specialist batsmen will hurt CYC.  Apart from Khakurel and Airee, they will depend on Chitkar to do most of the batting. Bhurtel, Tamang or Karki can bat but they are more known for lower order batting than a regular feature in the middle or the top order.
Probable XI: Khakurel, Chitkar, Airee, Bhurtel, Tamang, Karki, Kamal Airee, Bhandari, Uraw, Lama, Chand.

Prospect: Chances are slim for CYC until and unless they immediately find couple of in-form batsmen in the XI who can lead the batting charge.

A money-ball approach has surprised many in past, CYC will be no pushovers. They might not be able to win the tournament but qualifying for playoffs should be the first target.

The left-arm pacer Thagunna picked up four wickets against the Nepal XI team in last DPL. Amit Shrestha is one of the most consistent domestic batsmen in Nepal right now.

Jaikishan Kolsawala, the wicket-keeper batsman from Gujarat, had been consistent in Nepal before opening for Malla’s team in the Everest Premier League. Sunny Patel is handy all rounder who can dominate the oppositions.

Weakness: Top batsman, strategic player and captain Malla is struggling for form in the recent matches.

Lalit Rajbanshi, a great prospect of his own, along with Shahab Alam are the only proven spinners in the team lacking proper back-ups and variety in bowling department.

Prospect: A change in leadership for Kathmandu Goldens from last tournament and a change of team for Malla might gel up for an exciting campaign.

The sooner Malla gathers form, the better Goldens will fare in the tourney.
Kolsawala is an exceptional talent that can carry the batting onus of this team.

A good combination as a T20 team from all aspects. A team of effective all-rounders have a good mixture of big hitters as well as slow bowlers and pacers. They arguably have the best set of foreigner players in Punit Bisht and Puneet Mehra and above all Rohit Kumar Paudel, who stole the limelight in the recent international matches.

Rohit Paudel remains the hottest property in the country that carried the national team’s batting on his young shoulders will have comparatively easier role to play with the likes of Mehra and Bisht in the XI.

Look out of young pace bowler Narayan Joshi who impressed in Nepal’s Eastern Region U-16 championship not very long ago.

Weakness: Hari Shankar Shah only turned into a bowler in last premier league tournament and Bhuwan Karki’s bowling has weathered off in recent times.

The biggest concern will be the slow/spin bowling attack with Mehra being the sole proven wicket-taker among the available ones.

Prospect: A strong team that should make it to the final.

Aarif Sheikh has a record of reaching every final of the premier leagues that has been held in Nepal, the strength of this team suggests very much of the same.

The role of Binod Das in combination with Binod Bhandari as captain will determine how far they can go.

However, anywhere below the top two should count as a failure.

One of the poorly arranged teams from the auction.
The situation is as dire that skipper Shakti Gauchan might have to bat at the top order.
Similarly, they lack a proper wicket-keeper.

The foreign recruits for the team Sufyan and Dipak Prasad are also unproven in Dhangadhi’s track.
Team Owner: Suraj Upreti

Squad: Shakti Gauchan, Sagar Pun, Pradeep Airee, Jitendra Mukhiya, Siddhant Lohani, Sushan Bhari, Bikram Bhusal, Kushal Malla, Bipin Khatri, Sonu Ansari, Amar Singh Routela, Dipesh Shrestha, Sufyan Mahmood, Dipak Prasad and Prakash Jaisi.
Strategic Player and Team Captain: Shakti Gauchan
Talent Hunt Player: Prakash Jaisi
Foreign Players: Sufyan Mahmood (Oman) and Dipak Prasad (India)
Strength: The underdogs will not have the pressure to win the tournament and that might help them provide one or two surprises that may upset any team on their given day. Gauchan in tandem with Bhari have the potential to be the best left-arm duo of the tournament.
Lohani and Routela can get the ball to farthest if needed.

Sagar Pun remains one of the most effective all-rounders in the domestic circuit.
Weakness: They lack proper Nepali batsmen in the XI. Gauchan might have to take that extra responsibility of batting from the middle to end overs.

Pradeep Airee and Sagar Pun’s poor form with bat has stretched for too long now. Sufyan and Dipak are relatively unknown entities for the Nepali viewers.

Prospect: A fight to avoid the wooden spoon seems more likely of a prediction for the Rupandehi Challengers who had poor auctions.

The overseas recruits don’t sound that exciting as well. Too many out-of-form and out-of-favor players will need drastic upgrade to be able to be the trophy-winning team.

The UAE captain is the biggest X-factor of the tournament. Young openers Shankar Rana and Rabindra Jung Shahi are in good form and should follow the example of Sunil Dhamala on how to carry themselves in the marquee tournaments like DPL. The power-hitting of Sonu Tamang down the order can turn any match. The pace bowling duo of Sompal Kami and Lalit Bhandari provide experience as well as variety to the team.

Weakness: Too many openers will force some of them to bat in the middle order, an unnatural position for the batsmen. It might take some matches for them to settle down to a new role. Apart from Mustafa and Dhamala’s part-time but very effective spin bowling, Samsad Sheikh Alam is the only option for spin bowling.

Prospect: The defending champions have every reason to think they can go all the way once again with the presence of mercurial cricketers like Rohan Mustafa and Sompal Kami. The consistency of Sunil Dhamala will be a bonus for the team. The variety in bowling will demand respect from the opposition batsmen. Multiple options and deep batting and bowling lineups will land them as strong contender for the trophy toward the business end of the tournament.
(Shah is also associated with  DPL as creative director)