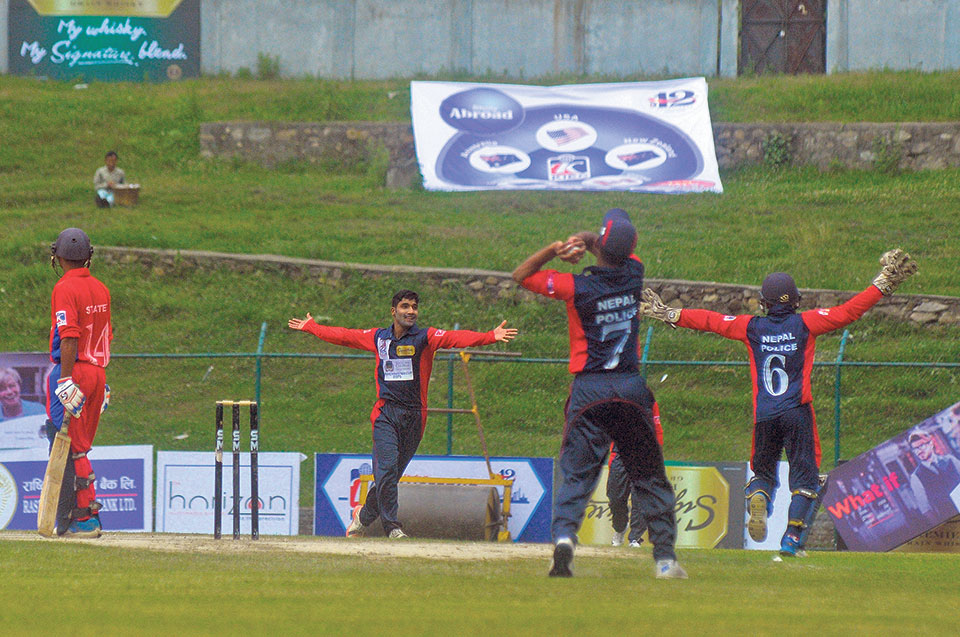 Players of Province 7 and Nepal Police Club in action during a match of the Inter-provincial Prime Minister Cup 2018 one day cricket tournament at the TU Cricket Ground in Kirtipur on Monday. Photo: Bijay Gajmer/Republica

KATHMANDU, May 29: Departmental team Nepal Police Club made a winning start to their title defense of Inter-provincial Prime Minister Cup with a commanding win of 174 runs over Province 7. In a match played at TU International Cricket Ground in Kirtipur on Monday, Police made 324 runs in 50 overs before limiting Province 7 to 130 runs for the loss of seven wickets in a rain-curtailed match.

Police won the toss and elected to bat first as opening batsman Sunil Dhamala continued his good form from Dhangadhi Premier League final. The right-handed batsman smashed nine boundaries in his 113-ball 83 dominating an opening partnership of 92 with wicket-keeper Dilip Nath (27) and 48 with Dipendra Singh Airee (25) for the second wicket.

National cricket team all-rounder Aarif Sheikh then provided an impetus down the order coming in at number five, smashing five sixes and two boundaries in his 37-ball 57. Similarly, Police Club’s skipper Manjeet Shrestha was brutal in his 33-ball stay at the crease bewildering Province 7 bowlers with three sixes and four boundaries on his way to 49 runs not out. Siddhant Lohani chipped in with 26 runs from just 15 deliveries including three fours and a six.

The Province 7 bowlers had an ill-disciplined day on field as they conceded 35 extra runs which included 24 wides. Sher Malla, the 5-wicket-hauler on Sunday against Province 6, picked up two wickets to limit the damage from one end but was unsuccessful as runs kept flowing from the other end. Sagar Bhandari conceded 85 runs from his nine overs, although he dismissed Sheikh on a rather forgettable day for the Province 4 bowlers. Surendra Chand and Santosh Bhatta also chipped in with a wicket each. In reply, Arun Airee played a lone hand staying not out on well-crafted 70 runs that included five boundaries and three sixes. It was too little and too less for Province 7 as they lost seven wickets in a hurry at the score of 66 runs at the end of the 24th over. Province 7 skipper Santosh Bhatta and opening batsman Roshan Nepali were the only other double-digit scorers with 10 and 13 runs respectively to their names.

Police’s Dipendra Singh Airee registered a 4-wicket-haul conceding 19 runs in his eight overs. Lalit Singh Bhandari picked up a brace including the prized scalp of Province 7 wicket-keeper-batsman Sanju Damai who had scored a fifty on Sunday against Province 6 at Mulpani Cricket Ground. Lalit Narayan Rajbanshi claimed the final seventh wicket.

The match was intervened by rain and reduced to 37 overs for the second innings. Province 7 finished with 130 runs for the loss of seven wickets. They lost the match by 174 runs by D/L method. Sunil Dhamala was adjudged the man of the match.

Similarly, in a Group A match played at Mulpani Cricket Ground, Province 1 skipper Puspa Thapa picked up three wickets to provide his team the first win of the tournament.

After the intervention of rain, Mehboob Alam-led Province 2 faltered in a chase, losing by 68 runs. Province 2 was all out for 145 runs in the 30th over. Puspa was supported by Minash Thapa’s three, Manoj Tamang’s two and Firdosh Ansari and Sandeep Dhungana’s a wicket each. Hari Shankar Sah top-scored for Province 2 with 44 runs at top of the order, hitting six boundaries.

Tuesday’s fixtures
Province 3 will take on Province 6 in Group B clash on Tuesday at TU International Cricket Ground, Kirtipur. Province 2 will face Province 4 in Group A encounter at Mulpani Cricket Ground.

JHAPA, May 7: The pre-tournament favorites of the Damak Cup Ruslan Three Star Club has been knocked out from the first... Read More...

100 Days: Tokyo Olympics marked by footnotes and asterisks
37 minutes ago
Biden set to withdraw U.S. troops from Afghanistan by Sept. 11
1 hour ago