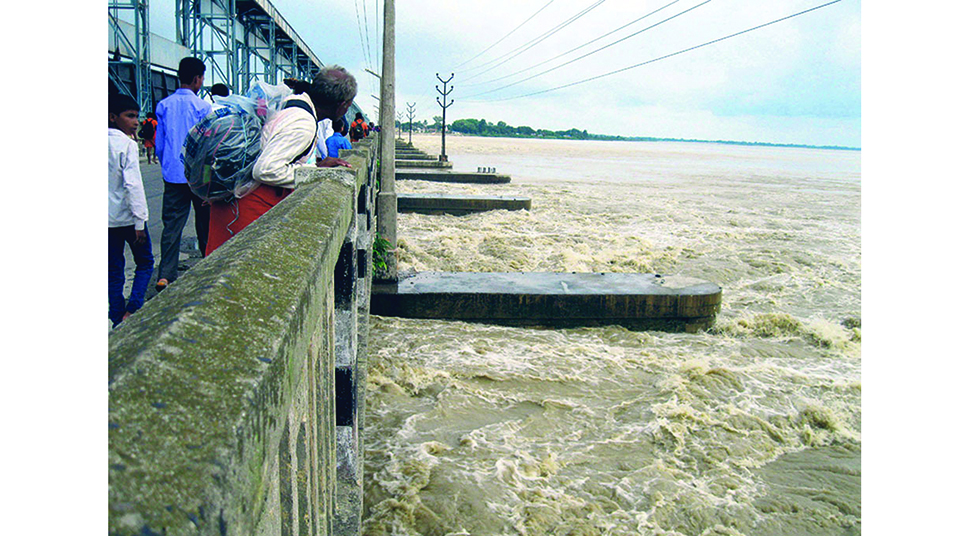 If Prime Minister Oli and Chairman Dahal are truly concerned about Madhesi welfare, they should work to tame Koshi floods and put in place a mechanism to harness Kosi water

Over the past few months, high-profile Nepali leaders have shown a heightened level of interest in Madhes development, with Prime Minister KP Oli declaring that efforts are underway to make Madhes shine bright in the near future. “The government is preparing to allocate a special budget of Rs 2.53 billion for the development of Tarai Madhes,” he announced recently.

Sharing the platform with Oli, Pushpa Kamal Dahal assured the audience that there will be big changes in the sector of infrastructure development of Madhes in the next four years. Oli later added that the government’s focus on Madhes has been strengthened by CK Raut joining the mainstream politics.

After suffering isolation from rest of the country and consequential low realization of Madhes’ economic potential, this surprising turnaround to a pro-Madhes profile of the government is encouraging and welcome. It is expected that economic outcomes of government’s pro-Madhes stance will be applauded by Madhesi people and be reflected in local and national polls that might favor the left-leaning parties, displacing Madhesi and Congress parties that have had stronghold in the region for as long as democratic politics has existed.

However, the next steps of moving Madhes economy forward are going to be challenging, in terms of planning the region’s development and accessing the resources needed to implement such a plan. PM Oli has mentioned that the government will build an international airport in the region, improve road connectivity with Kathmandu and expand regional rail link to provide market access to India for trade as well as tourism.

There is a hope that these initiatives could give life to a hitherto moribund economy but much more needs to be done to start the process of a broad-based growth that benefits the population by expanding employment opportunities and diversifying income sources. This can happen only if the development plan gets designed in a way that local resources are used to fuel growth and improve market access.

The economy can get started on such a development course—regional as well as national—if a mechanism is created that focuses on exploiting the region’s potential in agriculture and agro-processing sectors for meeting the region’s own needs and also produce a surplus for export to India that currently earns just a fraction of what is needed to pay for imports.

However, we need to realize that, at this time agricultural sector remains undeveloped, with no visible improvements in traditional practices that make very little use of farm machinery, improved seeds and fertilizers, and, most importantly, there is no access to reliable source of irrigation. Finally, the region continues to be ravaged by seasonal floods and droughts that have impeded farmers’ use of yield-improving inputs.

While transitioning to a productive and dynamic agricultural regime will require a serious commitment to the use of high-yielding inputs and new technology, the key to any such improvements is to provide safeguards to the sector from the ravages of droughts and floods, especially in the eastern parts of the region where such catastrophes have occurred more frequently causing widespread damages to crops, properties, infrastructure and loss of lives.

To help the region develop and modernize and make it shine, of which PM Oli has spoken, the government should be committed to taming Koshi floods and put in place a mechanism that helps make the use of region’s abundant water resources to develop agriculture, modernize transport, and enhance tourism of which the region remains totally deprived.

Taming of the Koshi River has been in process since the 1950s with joint collaboration between Nepal and India but much remains to be done. In the latest Koshi floods of 2008 around 200 people died and three million were rendered homeless. The region hasn’t fully recovered from damages sustained a decade ago, while the threats of repeat flooding have hung over the region discouraging re-building efforts and new investments.

The main weakness of the Koshi flood prevention mechanism has been that the efforts are focused on construction of dams and embankments to keep the river flow within a specified area but it does not ensure that protective devices will not be broken again and serious flooding will not occur. A permanent solution to the Koshi problem then lies in turning its waters into a wonderful gift of nature and making it work like that.

The idea is to connect Koshi River with Bagmati River some 200 kilometers to the west. The canal dug adjacent to the edge of the hill to the north will pass through four to five medium size rivers like Balan and Kamala and some dozens of streams and rivulets. The idea of the canal will be that all the water channels from Koshi to Bagmati will get connected to each other and, if managed well, water levels are controlled to make the canals and rivers navigable and attached to adjoining farmlands for year-round irrigation. The controlled area between Koshi and Bagmati rivers will comprise some 10,000 square kilometers area with five million population.

It’s not exactly known how costly such a venture will be, from the start to finish. This will depend on the depth and width of the main canal as well as the work on adjoining water channels that will need to be turned into irrigable canals. Also, for making the river water a more reliable source for year-round agriculture, the project will give space for the construction of reservoirs, of the size and depth that offsets the deficit or surplus river water supply at the time of drought and flood.

But how much will the project cost? To get the thinking started on the construction requirements for the main canal—200 kilometers long, 100 meters wide and 20 meters deep—a total of 400 million cubic meter measure of earthwork will need to be done to get the main infrastructure work in place. Together with the auxiliary canals, an upward of almost a billion cubic meters of earthwork would complete the entire project. In terms of money, around US$10 billion in investment capital will be needed.

Will the spending of this much of money be worth the benefits perceived from the project and, even if the benefits can match the resource commitment, can that much of amount in capital contribution be made available for the project? The initial insight for a project of this size and so transformative is that it be planned over a longer time horizon—a period of 10 to 15 years will be reasonable. And the good thing about the project will be that borrowed resources can gradually be paid out from revenue generated from the project which would comprise the sale of reclaimed land, fisheries resource and from levying of a reasonable charge for irrigation water.

After taking a stock of the hard choices which have to be made at the initial phases of the project, the benefits that a completed project of such magnitude can bestow upon the region will simply be phenomenal. Floods and droughts will no longer be an issue in the planning of development in agriculture sector where much of the land will be used for double and triple cropping. Easy access to irrigation water will reduce the need for ground water and, additionally, the water table will rise as the irrigation water seeps underground to replenish the earlier losses from the groundwater irrigation.

With access to irrigation water on demand, at the needed time, and in desired quantity, the entire of planted area in the region will be able to make use of improved variety seeds and commercial fertilizers without worries of loss due to drought and flooding. And, further, managed use of water will increase the region’s hydroelectric potential which currently doesn’t exist.

If Prime Minister Oli and Chairman Dahal are truly concerned about Madhesi welfare, they will have to think of taming Koshi floods and putting in place a mechanism to harness this water source to its full potential. Then Madhesh can develop quickly and the whole region will shine bright. Canals and reservoirs will make the region look beautiful and attractive to tourists, much beyond anyone’s imagination.

Some doctors are not sympathetic to their patients. They launch their stethoscopes at private clinics and hospitals against their patients... Read More...