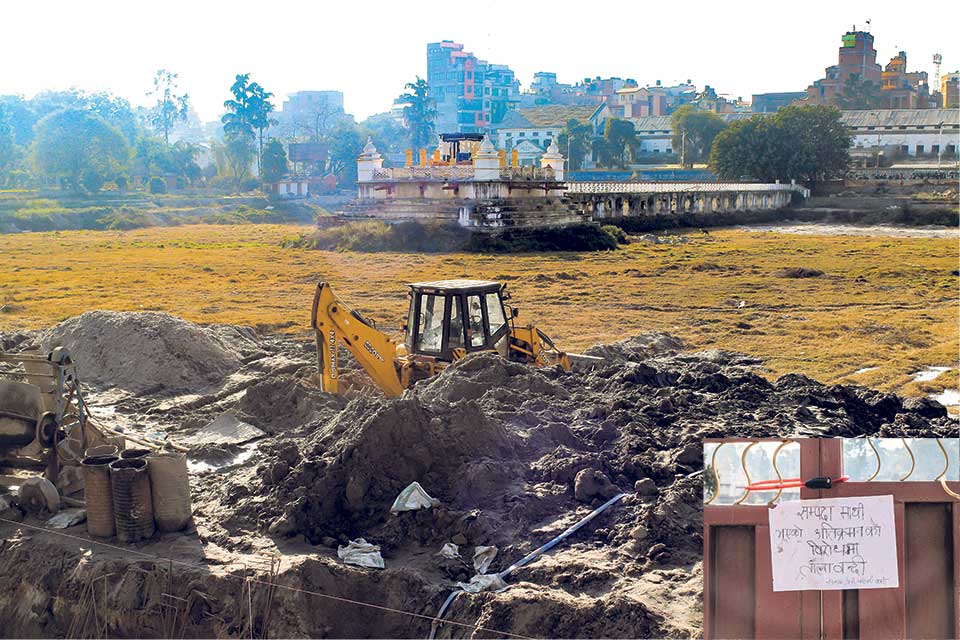 KATHMANDU, Dec 27: Kathmandu Metropolitan City (KMC) Deputy Mayor Hari Prabha Khadgi locked the gate of Ranipokharai  Tuesday after making a site inspection there. The northern side of Ranipokhari opposite  Bishwojyoti Cinema got locked up.

Deputy Mayor Khadgi visited Rani Pokhari along with locals and archeologists to stop the construction of a wall around the historic pond. The lock was, however,  soon removed by KMC Mayor Bidya Sundar Shakya after doing a site inspection of his own.

According to Khadgi, the use of concrete to build the wall is unacceptable as it would compromise the heritage value of Rani Pokhari. She also directed Urban Infrastructure Development Department chief Suresh Rai and the contractor company to suspend the project work immediately.

“I was elected by the public because they trusted me to do a better job. So, I will not remain silent when the historic site is about to have encroached in this fashion,” added the deputy mayor. “Now the mayor,  the Department of Archeology (DoA), historians and archeologists need to discuss the controversy over Rani Pokhari and resolve it.”

Similarly, Alok Tuladhar, a local activist and initiator of the Facebook page 'Save the heritage', also spoke against the modernization of Rani Pokhari by KMC.

He said this approach was against the 'Nepal Ancient Monuments Preservation Act'. According to him, building a concrete wall will shrink the water surface of Rani Pokhari by 20 percent. “We wrote an application to KMC to stop building the concrete wall. But KMC didn't respond. So, we had to  lock the gate.”

Mayor Shakya, however, claimed that the pond area won't  decrease even an inch. He said, “The pond area is not going to have encroached even one inch if a concrete wall is built. If the use of concrete destroys our culture,  why did  people not protest during the time of King Mahendra  when concrete was used around the Bal Gopal temple.”

He added, “Instead of protesting why not we all  join  hands and rebuild the  heritage site without hindrance.”

Meanwhile, work on the concrete wall has halted.