KATHMANDU, Nov 5: The Nepal Rastra Bank (NRB) has formed an inquiry committee to probe into various allegations made against its Deputy Governor Shiba Raj Shrestha.

With the formation of the inquiry committee in line with the government’s written request to the central bank, NRB Deputy Governor has been suspended from his post.

Following a written request of the Ministry of Finance last week based on a cabinet decision of October 17, the NRB has initiated investigation into Shrestha over a dozen allegations on his ‘misconducts that threaten the financial stability of the country’.

It has been alleged that Shrestha acted with mala fide intention in the regulation of bank and financial institutions, pocketed money by preparing fake bills and documents during foreign visits, among others. 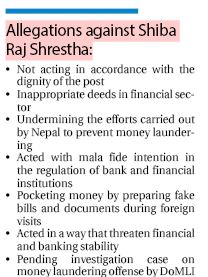 The move of the government, apparently aimed at ousting him from the post of deputy governor, is also due to an ongoing investigation on a money laundering case by the Department of Money Laundering Investigation (DoMLI).

In its letter, the finance ministry stated that the cabinet decided to initiate investigation over those allegations also due to a written request from the Department of Money Laundering Investigation for support over its investigation on a money laundering offense.

The inquiry committee has been given 30 days to look into allegations against Shrestha and submit its report to the central bank. The report will then be presented to the government through the Ministry of Finance, according to a high-level source at the NRB.

Based on the report, the government will decide whether to remove him Shrestha from the post.

“The inquiry committee has been formed. The investigation issue will take its own course now. It will look into all the allegations. Shrestha will be interrogated by the committee. The report presented by the committee will be presented to the Ministry of Finance,” said a board director of the NRB, requesting anonymity.

However, Shrestha denies any wrongdoing. “I categorically refute allegations leveled against me. I have not done anything that harmed the financial or banking system of the country,” Shrestha told Republica. “I think the inquiry process is a ploy to remove me from the race of becoming the next governor.”

According to the NRB Act, 2002, the government shall remove deputy governor from the office on the basis of recommendation made by an inquiry committee.

Many in the NRB believe that the government was setting a legal ground for removal of Shrestha from his post. A deputy governor is also considered a contender for the governor. The incumbent governor, Chiranjibi Nepal, is retiring after five months.

KATMANDU, Dec 15: Nepal Rastra Bank (NRB) has said that transport syndicates has become one of the major challenges for country's... Read More...

Nepse near 2,300 points after upbeat trading week
6 hours ago

PHOTOS: Students play tug of war in a symbolic protest against House dissolution
6 hours ago