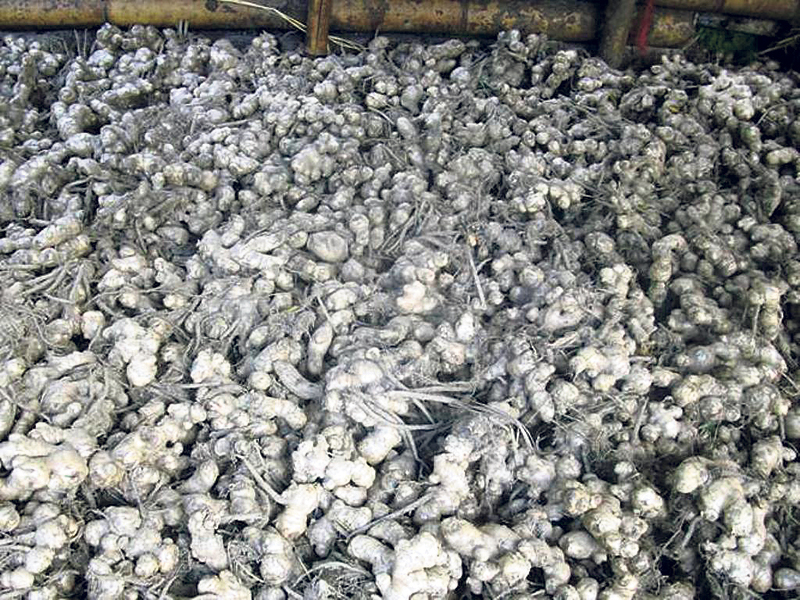 Export of cardamom, ginger and tea affected by Indian decisions in recent months
JHAPA, Nov 29: Even a small decision taken by India has been delivering a big jolt to the Nepali economy because of our reluctance to reduce trade dependency on the southern neighbor and the government negligence to diversify export products.

The recent demonetization decision of India has dealt a severe blow on our export trade.

Export of ginger, cardamom and tea, among other cash crops, has dwindled significantly in recent days. India put a ban on import of Nepali ginger for more than two weeks in September, stating that Nepali ginger has high pesticide residue.

Now, India has levied additional duty on Nepali ginger which has made Nepali product less competitive in the Indian market. This has caused Nepal's ginger export to fall.

At the height of last year's Indian blockade, the government had declared to make our economy self-reliant, unveiling plans to diversify export trade. But nothing has been done in this direction so far.

Economists have criticized the government for neglecting such a pertinent issue. Talking to Republica over phone from Kathmandu, former finance secretary Rameshwor Khanal said that our country fells the heat of even the minor decisions taken by India because our government has not taken any step to develop infrastructures and make the country economically dependent.  "Had Nepal expanded market of products like ginger, broom grass (amriso) and cardamom, the effects could have been lessened," added Khanal.

Khanal said the construction of second international airport in Nijgadh of Bara and use of other Indian ports could improve Nepal's access to the international markets.

“Unfortunately, we have not seen markets other than India,” added Ojha.

Export of tea has also been affected time and again. During Indian President's recent visit to Darjeeling, local leader Bimal Gurung had urged the Indian President to put a ban on import of Nepali. Though Gurung's demand has not been addressed yet, attempts have been made many times to affect import of tea from Nepal.

Indian authorities often raise pesticide residue issue if they want to stop import of Nepali products because they know that Nepal does not have lab facilities near its custom offices to counter their claims.

“Ilam is now selling tea to European countries. We should also find similar markets for tea produced in other parts of the country. We shouldn't be dependent on any particular market,” Ramesh Ranjan Adhikari, a tea producer of Jhapa, told Republica. "Finding an alternative to the Indian market is the only solution," Adhikari added.

Cardamom export to India has also come down in recent days. Earlier, it was affected because of the claims by the Indian authorities that cardamom of inferior quality was being mixed with Nepali cardamom before exporting to India. Now, the demonetization is affected exports of this cash crop.

Nirmal Bhattarai, president of the Federation of Cardamom Entrepreneurs, said it was high time that the government started cardamom processing plant in the country.

"Access to electricity to all areas in the country in three years," assures Energy Minister Sharma

TAPLEJUNG, Feb 4: Minister for Energy Janardan Sharma has pledged that all places in the country will be connected to... Read More...

Cases of viral fever on rise across country: EDCD

Gold price increases by Rs 500 per tola
1 minute ago