Dengue in 15 districts, govt in 'search and destroy' mode 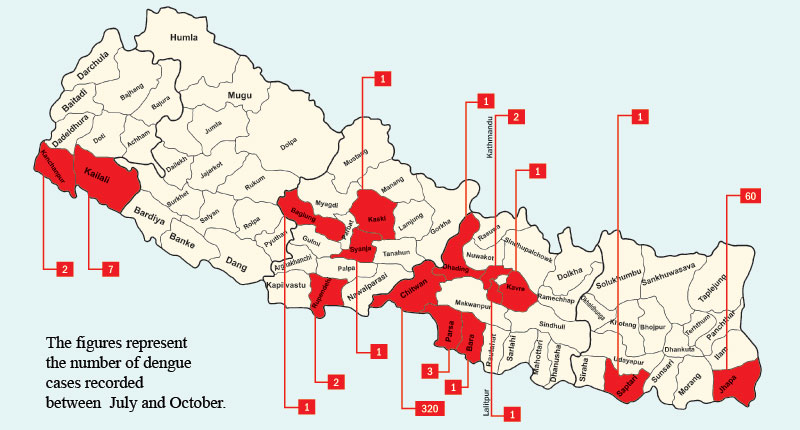 KATHMANDU, Oct 25: The Ministry of Health has said that dengue has spread to 15 districts of the country and it has launched a 'search and destroy' campaign against the mosquitoes that cause dengue and their breeding sites.

According to the Epidemiology and Disease Control Division (EDCD) under the Department of Health, 404 persons have been detected with the dengue virus in 15 districts of between July and October. However, no death has been reported due to dengue, said Dr Bhim Acharya, director at EDCD.

Chitwan district has recorded 320 dengue cases, the highest number among the affected districts, followed by Jhapa with 60 cases. Similarly, seven persons were found infected in Kailali, three in Parsa; two each in Kathmandu, Rupandehi and Kanchanpur; and one each in Lalitpur, Dhading, Kavre, Saptari, Kaski, Baglung, Syangja and Bara districts. An unverified case from Kapilvastu has also been reported. “One person detected with dengue in Kathmandu is an Indian national,” an EDCD official said.

Dr Acharya informed that the government has mobilized two special teams of health workers for Chitwan and Jhapa. “The teams have started searching out and destroying the larva of the mosquito, to control the epidemic,” he said. “I have heard that a doctor with one of the mobilized teams has also been infected with the virus. But this is yet to be ascertained,” he added. “We don't need to panic.”

No specific vaccine has been developed to fight the virus, which is transmitted by the Ades mosquito. The mosquito, which bites humans even in the daytime, is to be found in city and semi-urban areas only. It does not live in dirty water or sewerage but only in clean and still waters or in water accumulated in pots and other chance recepticles.

“The larva grows up with the dengue virus and even the eggs are infected. An egg develops as a mosquito in 12-14 days,” said Dr Acharya. “We have to find the larva and destroy it. The high tide of fertility for the mosquitos is between July to mid-November,” he added. “We have to wear full-sleeved, full-length clothes to protect against the mosquito.”

Dengue symptoms
If you contract dengue fever, the symptoms usually begin four to seven days after the initial infection. In many cases, the symptoms will be mild. These may be mistaken for symptoms of flu or other infections. Young children and people who have never experienced infection may have a milder illness than older children and adults.

Symptoms generally last about 10 days and can include:
Ø    sudden, high fever (up to 106 degrees Fahrenheit)
Ø    severe headache
Ø    swollen lymph glands
Ø    severe joint and muscle pains
Ø    skin rash (appearing between two and five days after the initial fever)
Ø    mild to severe nausea
Ø    mild to severe vomiting
Ø    mild bleeding from the nose or gums
Ø    mild bruising of the skin
Ø    febrile convulsions

Treating Dengue Fever
There is no specific medication for dengue. If you believe you might have been infected, you should use over-the-counter pain relievers to reduce your fever, headache and joint pain. However, aspirin and ibuprofen can cause more bleeding and should be avoided.

Your doctor should perform a medical exam and you should rest and drink plenty of fluids. If you feel worse after the first 24 hours of illness-once the fever has gone down-you should be rushed to hospital to check for complications.

Daraz offers 15% off on card-prepayments
6 hours ago