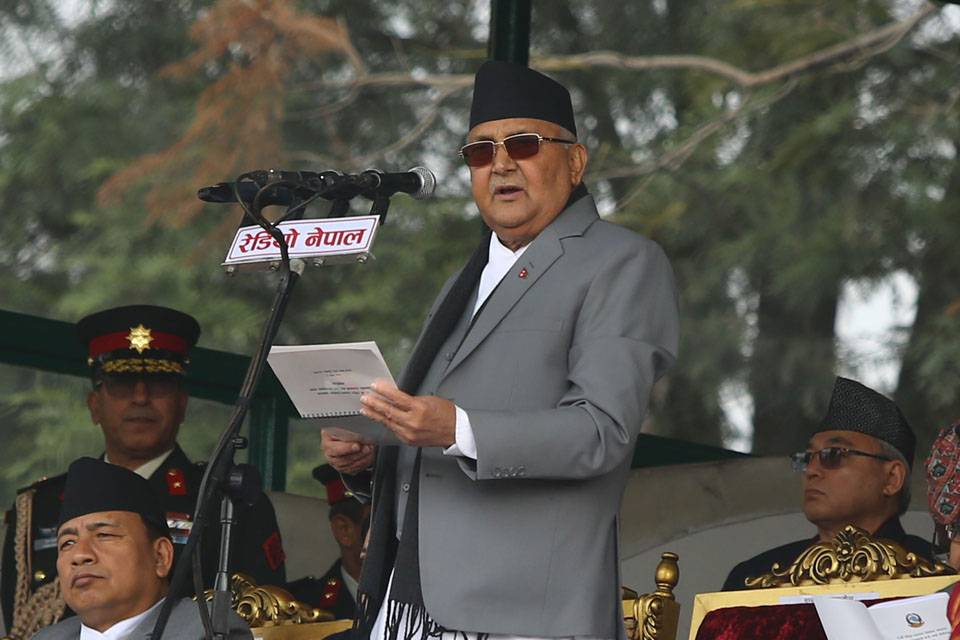 The Democracy Day that Nepal celebrates every year on Falgun 7 is becoming a ritual devoid of substance. Ceremony is organized, prime minister and ministers participate, speeches are made, promises are made and, then, things return to the status quo. It was so during the heydays of the Panchayat. King used to address the people, and there used to be public holiday. Even then rulers expressed unflinching commitment to democracy, though they were curtailing the freedom of expression. The 69th Democracy Day celebration on Tuesday, Prime Minister K P Sharma Oli observed the ceremony and delivered a speech. He called on all to contribute to materializing decades of Nepalis’ dream of development and prosperity. Nepal “should move ahead speedily toward good governance and development,” he declared. “We are moving ahead in the direction of a full-fledged democracy with economic development and social justice, fighting against poverty, unemployment, backwardness, discrimination and lack of development, having defeated autocracy and dictatorship.” He expressed commitment to upgrade Nepal to a developed country by 2022.

As a matter of fact, Nepal has not been able to address aspirations of people because of ruling parties’ tendency to centralize power and enrich themselves while doing little for the country and countrymen. The lust of luxury among our leaders is such that general public often call them ‘mini kings’ and ‘mini queens.’ And their promise and commitment to freedom of expression, transparent governance, equality and accountability have been limited to rhetoric. This is one reason celebration of Falgun 7 does not appeal the people much. Without doubt, Falgun 7 is important day in Nepal’s history. This was the day when the country became free from the autocratic Rana oligarchy and heralded a new age of rule by the people, of the people and for the people. It is marked to commemorate those who fought for it and who sacrificed their precious lives for people’s cause. But there is a growing perception that democracy has become a means for the rich and powerful to accumulate wealth while the poor people struggle for livelihood.  Behavior of those in power is mainly responsible for creating this impression.

Prosperity, freedom, equality and justice—aspirations democracy day actually invokes—has to trickle down to the grassroots level. And no entity is better placed to address these aspirations than the current government. For the first time after decades, the country has a democratically elected two-thirds majority government with sweeping powers to amend laws to clear all hurdles to realize common aspirations. We have come a long way since 1950. The centralized governing system has become a thing of the past; we have seven provincial governments and 753 local governments in place. In principle, power has reached in people’s hands. But only when political leaders truly adhere to democratic values and as truly devote themselves to welfare of people, will people taste fruits of democracy. True celebration will be when elected leaders work for people, and only people.

People are protesting. Heed the people

What looked like the beginning of protest-free times seems to be slipping away under the watch of the government and,... Read More...

On Wednesday, the Supreme Court issued such an order which could not only restrict production of creative arts, but also... Read More...

Private hospitals in Kathmandu charging up to Rs 50,000 per bed a day for COVID-19 treatment
19 hours ago

How Hukam derailed Nepal’s vaccine procurement: a story of power, greed and commission
1 hour ago

Hotels providing quarantine services can charge no more than Rs 3,000 per person a day
19 hours ago

Hukam increased price of vaccine by 50%, just 12 days after SII communication
19 minutes ago

How Hukam derailed Nepal’s vaccine procurement: a story of power, greed and commission
1 hour ago