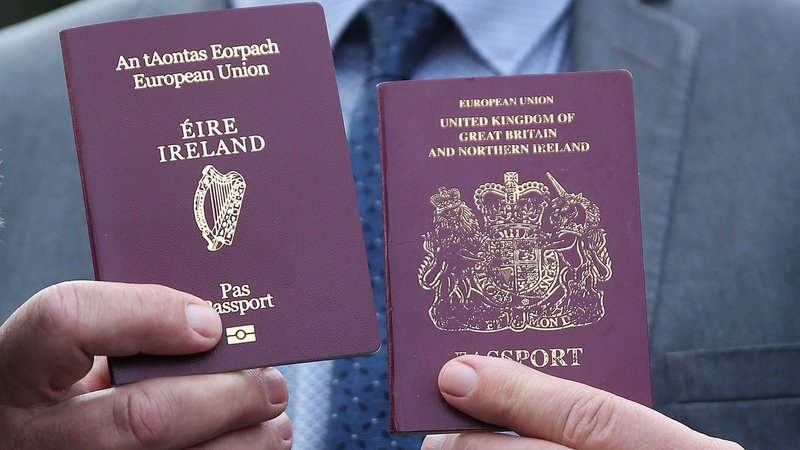 Demand for Irish passports at the country’s embassy in the UK has surged as the clock ticks down to Brexit.

CCCCC, the year before the European Union referendum.

Figures released to Fine Gael’s Neale Richmond, chairman of the Brexit committee in the Irish senate, showed there were almost 45,000 applications in the first half of 2018.

Mr Richmond suggested that the “looming disaster of Brexit” was prompting eligible Britons to reconnect with their Irish heritage.

He said: “Since the people of the UK voted, narrowly, to leave the EU in 2016, we have seen a continuing rise in the number of applications for Irish passports in the UK.

“Current rules entitle those born to Irish parents or grandparents to apply for an Irish passport through a claim to citizenship.

“At least 10% of the UK’s population, not including Northern Ireland, are estimated to qualify for an Irish passport and in light of Brexit, many including a number of my own family members are staking their claim to an Irish passport.

“Figures released to me by the Irish Embassy in London have shown that there is no sign of this rush for Irish passports abating.”

“Figures for the first half of 2018 show the number of applications received by the embassy in London is already at 44,962.

“Embassy officials predict that based on this, 2018 will be the busiest year so far for Irish passport applications in the UK.

“While many in the UK are concerned with the looming disaster of Brexit, we must seize the positives from this new wave of people reconnecting with their Irish heritage, our post-Brexit UK-Irish relations can be built on a strong, connected, diaspora.”

In an indication of the economic damage failure to reach a Brexit deal could cause, analysis by global rating agency Standard & Poor’s (S&P) indicated the UK would be plunged into recession, with increased unemployment and a collapse in house prices.

“In our no-deal scenario, the UK would experience a moderate recession lasting four to five quarters, with GDP contracting by a cumulative 2.7% over two years, after which the economy would return to growth, although the pace of growth would be moderate,” the S&P paper said.

“By 2021, economic output would still be 5.5% less than what would have been achieved had a deal been struck and a transition occurred.

“Unemployment would rise from current all-time lows of 4% to above 7% by 2020 (a rate last seen in the aftermath of the financial crisis). House prices would likely fall by 10% over two years.”

The agency said that it expected a deal to be reached but “the risk of a no-deal Brexit on March 30 2019, while still not our base case, has increased sufficiently to become a relevant rating consideration”.

Theresa May and Philip Hammond will seek to allay business leaders’ concerns about Brexit on Wednesday.

The Prime Minister and Chancellor will speak to more than 100 bosses and investors in a gathering arranged to update them on the Budget.

End of May, PM steps down as Conservative leader