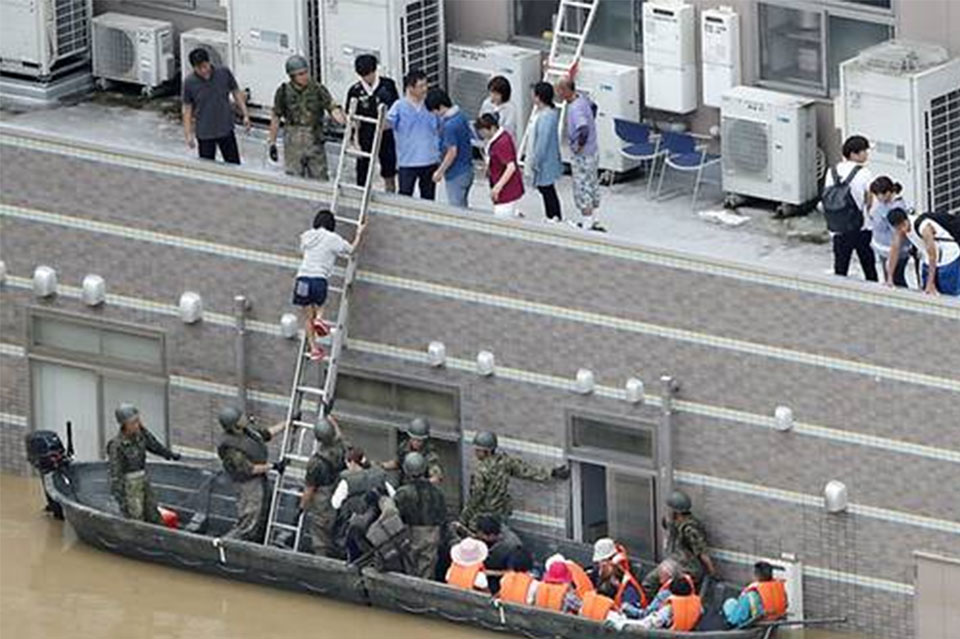 Local resident are rescued from a flooded area at a hospital in Kurashiki, Okayama Prefecture, Japan, in this photo taken by Kyodo July 8, 2018. Mandatory credit Kyodo/via REUTERS

SAKA, July 9: The death toll from record rains that have devastated parts of Japan rose on Monday (Jul 9) to nearly 100, as rescue workers and troops struggled in the mud and water to save lives.

Dozens of people remain missing after the days of torrential rains that have caused flash floods and landslides.

Rescue workers and troops have been struggling in the mud and water to save lives.

Prime Minister Shinzo Abe warned of a "race against time" to rescue flood victims, some of whom have resorted to tweeting desperate messages seeking help from emergency services.

In villages across central and western Japan, trapped residents have been forced to take shelter on their rooftops as floods swirl below.

More than two million people have been told to evacuate, but the orders are not mandatory and many remained at home, becoming trapped by rapidly rising water or sudden landslides.

The meteorological agency issued new alerts on Sunday, while lifting the warning level in other regions where rain was subsiding.

But it also cautioned residents that even where downpours were over, the heavy rains had loosened earth - meaning the risk of landslides remained high.

In the town of Mihara, in the south of the Hiroshima region, a let-up in the rain laid bare the devastation wrought by the downpours.

Roads were transformed into muddy flowing rivers, with dirt piled up on either side as flood water gushed around the wheels of stranded cars.

"The area became an ocean," said 82-year-old Nobue Kakumoto, a long-time resident. "I'm worried because I have no idea how long it will stay like this."

Several dozen residents descended into the village to inspect the damage after spending the night in a tiny shelter on higher ground.

In the town of Saka, also in Hiroshima prefecture, Eiichi Tsuiki evacuated to the top floor of his house as rising waters washed away cars outside.

Later, as he walked around to inspect his neighbourhood, he saw many houses with the doors wide open, suggesting that residents had evacuated in a panic, he said.

"We are carrying out rescue operations around the clock," Yoshihide Fujitani, a disaster management official in Hiroshima prefecture, told AFP.

"We are also looking after evacuees and restoring lifeline infrastructure like water and gas," he added.

"We are doing our best."

In western Okayama prefecture, rescue operations were underway to evacuate several hundred people including children and the elderly from a hospital, some by helicopter.

Those in the building became trapped when a nearby river burst its banks and flooded the area, and a nurse inside told local media there was no power or water, and food was running short.

"Around 1,000 people were seeking rescue by Sunday morning, but we don't yet have a complete picture of the disaster, which is enormous," Mutsunari Imawaka, a spokesman for the prefecture's disaster management office, told AFP.

"We are working hard to rescue them as quickly as possible. Time is running out."

The Kyodo news agency said around 1,850 people in the area had been trapped on the roofs of buildings, and that the land ministry planned to mobilise 20 trucks to begin pumping water out of flooded areas and restore access.

More than 50,000 rescue workers, police and military personnel have been mobilised to respond to the disaster, which has left entire villages submerged by flooding and left just the top of traffic lights visible above the rising waters.

The toll has risen steadily in recent days, with the conditions forcing rescue workers to rely on boats and helicopters to extract trapped civilians.

The floods have halted production at plants across the affected region, with reports of electricity, water and mobile phone network outages.

The disaster is the deadliest rain-related crisis in the country since 2014, when at least 74 people were killed in landslides caused by torrential downpours in the Hiroshima region.