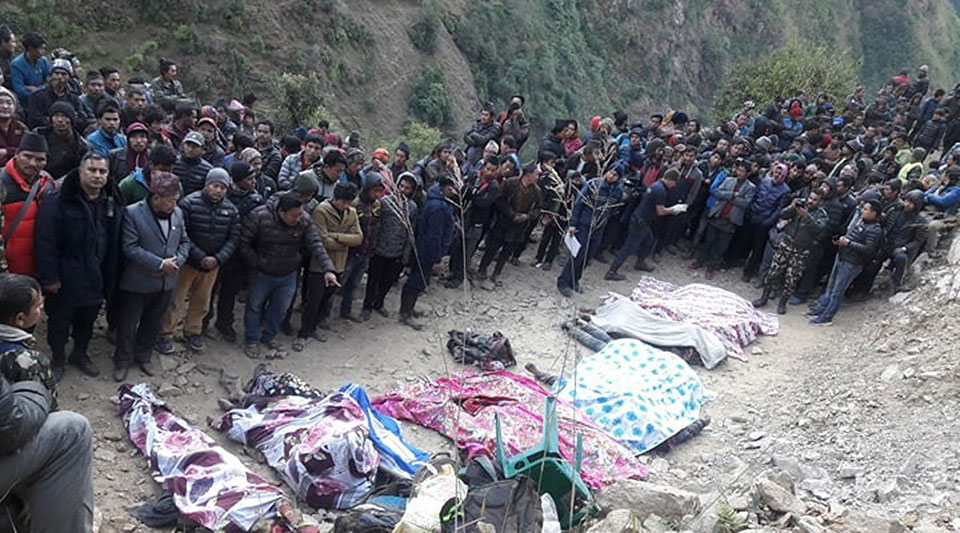 NUWAKOT, Dec 16: The death toll from Friday's mini-truck crash at Ghyangphedi in Nuwakot district has climbed to 20 as two more passengers succumbed to their injuries.

Eighteen people had died on the spot when the accident took place on Friday evening, according to the District Police Office (DPO), Nuwakot.

One of the victims, Ritesh Pandit, 18, died at Ramati while being taken to Kathmandu for treatment. Likewise, another victim one Sukra Ram Tamang, 24, breathed his last in the course of treatment at Tribhuvan University Teaching Hospital (TUTH), Kathmandu.

With this, the identities of all the deceased have been ascertained, informed Deputy Superintendent of Police (DSP) Bhim Lal Bhattarai of the DPO.

Search and rescue operation continued throughout Friday night and concluded only on Saturday morning, informed chairman of Dupcheshwar Rural Municipality Yobindra Singh Tamang. The survivors were sent to Kathmandu for treatment via ambulances.

BSP Bhattarai said the rescue works were hindered by cold weather and rough topography. The ill-fated mini-truck with registration number Ba 3 Kha 3913 had plunged 500 meters down the road into Tandi River.

“We arranged the post-mortem in the incident site as it would be inconvenient for the locals to have post-mortem carried out at District Hospital, Trishuli and then bodies taken back to the village for final rites,” said Nuwakot's Chief District Officer Udhyab Bahadur Thapa.

A team led by Dr. Ujwol Thokar had reached the incident site to perform a post-mortem. The bodies were handed over to their relatives following the post-mortem.

Over 40 people were travelling in the ill-fated mini-truck which was en route to Sisiphu from Shikharbesi, according to police. The accident site is about three-and-a-half hours drive from Nuwakot's headquarters Bidur.

Thirty five families at risk due to boulder

NUWAKOT, Aug 24: Thirty five families are at risk due to an unstable huge boulder just above a settlement at... Read More...