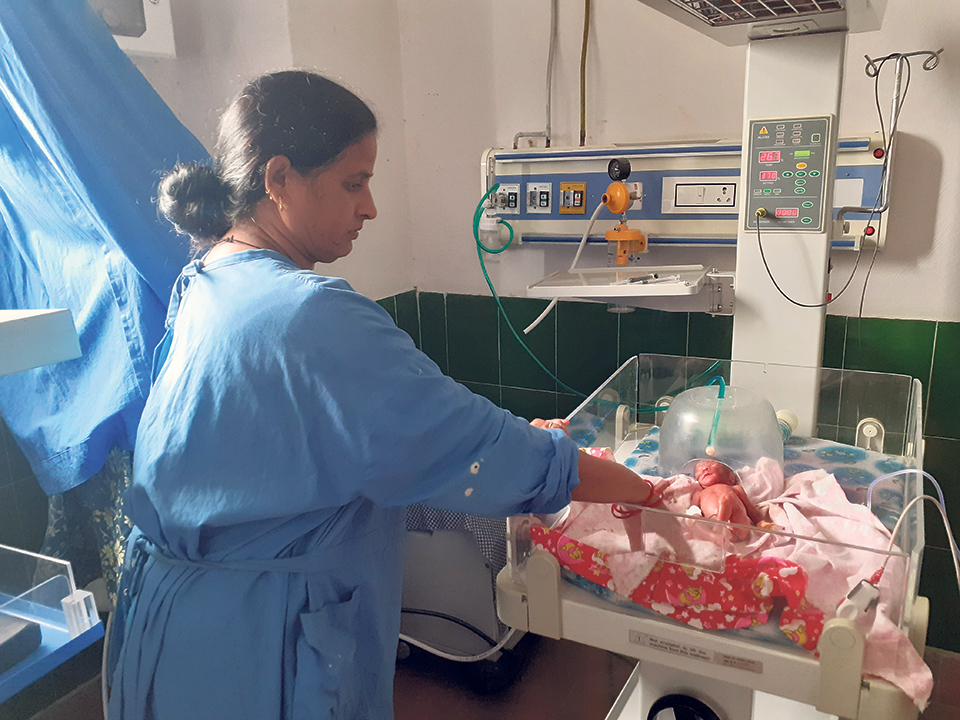 A newborn who was declared ‘dead’ by Bheri Zonal Hospital on Friday morning and taken to burial ground, being treated at the ICU of the hospital. The newborn had cried when the plastic wrapper was removed in preparation for burial. Photo: Arjun Oli/Republica

BANKE, Sept 14: Hours after Bheri Zonal Hospital declared a newborn dead, the baby was found to be alive by family members just before performing the final rites. The incident took place in Nepalgunj on Friday morning.

Kamala Adhikari, a resident of Cheragaad Municipality-9, Jajarkot, gave birth to a premature baby in the wee hours of Friday. After a few hours, duty in-charge at the labor ward of the hospital Basundhara Gyawali told the parents that their premature baby did not survive.

Milan Adhikari, Kamala’s husband, received the body after signing the documents as asked by the hospital administration. The hospital staffers also asked the Adhikaris to pay Rs 2,000 for burying the body.

But the family members refused to pay the amount and headed to a burial ground in Bulbuliya, Nepalgunj. After digging a hole to bury the body, Kalawati Nepali, an employee at the burial ground, asked Adhikari to hand over the baby which was wrapped in a black polythene. She opened the polythene and cried – the baby is alive! The parents then burst into tears and rushed the baby to the hospital again.

Talking to Republica, Kalawati said that it is not the first time she found babies alive at the graveyard. “I have returned babies alive from here many times,” she said. “Some couples bring here living babies intentionally to cremate them. In some cases, hospitals are responsible for this,” she added.

“This was not the first case that the baby was found to be alive when I was about to bury in the same yard,” she said.

Information Officer Dr Sanket Risal at Bheri Zonal Hospital said that the hospital administration is well aware of the incident. “We are now investigating the case,” he said. Head of the nursing department at the hospital, Durga Shrestha, however, defended the staff nurses on duty.

“The nurses should not be blamed in this incident,” she said. “The baby was born in 23 weeks and weighed just 600 grams. It’s really difficult for us to save such prematurely born babies,” she said.