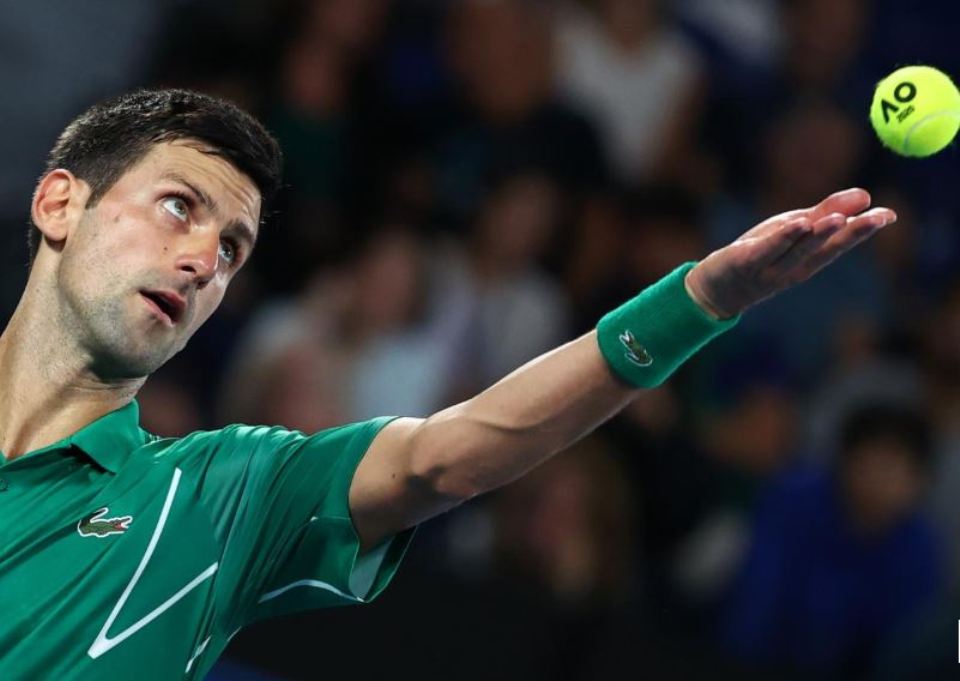 MELBOURNE, Jan 21: Defending champion Novak Djokovic began his Australian Open title defence on Monday with a landmark 900th career victory on the Tour on an opening day where heavy rains suspended play on the outer courts.

Djokovic beat Germany’s Jan-Lennard Struff 7-6(5) 6-2 2-6 6-1 to advance to the second round as the Serb looks to win a record-extending eighth title at Melbourne Park.

World number one Ash Barty dropped a set but fought back to beat Lesia Tsurenko 5-7 6-1 6-1, keeping alive Australia’s hopes of having a first women’s champion since 1978.

American teenager Coco Gauff was drawn against her idol Venus Williams once again at a Grand Slam and the 15-year-old prevailed on her main draw debut with a 7-6(5) 6-3 victory.

World number one and top seed Rafa Nadal begins his quest to equal Federer’s record of 20 Grand Slam titles when he takes on Bolivian Hugo Dellien on Tuesday.

Highlights of the first day at the Australian Open, the first Grand Slam tournament of the year, on Monday

Second seed and defending champion Novak Djokovic survived a mid-match scare to beat German Jan-Lennard Struff 7-6(5) 6-2 2-6 6-1 to advance to the second round.

“I’m just starting,” he joked when he was told it was his 900th win on the Tour. “I thought I started off well. He came back, he turned it around, he was not missing much. Credit to him for fighting, he’s a very powerful player.”

China’s Zhang Shuai came back from a set down to beat Sloane Stephens 2-6 7-5 6-2 to stun the 24th seed and former U.S. Open champion in a little over two hours.

Zhang fired 41 winners and broke her American opponent, who had the chance to serve for the match in the second set, six times to set up a second round clash with American qualifier Caty McNally.

Grigor Dimitrov surrendered the opening set but rediscovered his best form as he sent down 17 aces and 47 winners to overcome Argentine Juan Ignacio Londero 4-6 6-2 6-0 6-4.

Action on two of the three main showcourts will resume in the evening session. Play on the outer courts will not begin before 6.30 p.m. local time following heavy rain, organisers said.

“I was really nervous for today’s match. I was shocked when I saw the draw,” Gauff said in a courtside interview before addressing the Margaret Court Arena crowd.

“I just want to say thank you guys so much. You guys were chanting my name and I only thought that would happen at the U.S. Open.”

Petra Kvitova said her crushing 6-1 6-0 win over Katerina Siniakova was bittersweet after her Czech compatriot was reduced to tears late in the contest.

“I saw Katka was in the last game of our match crying, so it wasn’t really nice for me. We know each other well,” Kvitova told reporters.

“We practice in the same club in Prague and it’s not easy to play (someone) you know well. But it’s a tennis match and I just had to keep rolling.”

WOZNIACKI HAS NO REGRETS RETIRING BEFORE OLYMPICS

Caroline Wozniacki said the thought of retiring after this year’s Olympics had crossed her mind but the former world number 1 has no regrets about her decision to walk away following the Australian Open.

“I wished I could have played doubles or mixed doubles. That would have made it even more desirable for me to go out there... who knows? Maybe I’ll show up and do something else,” Wozniacki told reporters.

Asked about a potential switch to distance running, the 29-year-old added: “I don’t know if the Olympics and a marathon would be my way. Maybe in a bit more leisurely way.”

FEDERER CRUISES INTO SECOND ROUND

Roger Federer, who is looking to become the first 38-year-old man to capture a Grand Slam singles title in the Open era, swatted aside American Steve Johnson 6-3 6-2 6-2.

Caroline Wozniacki, playing in the final tournament of her career, eased past American Kristie Ahn 6-1 6-3 while Romania’s Sorana Cirstea stunned 32nd seed Barbora Strycova 6-2 7-6(5) before rain brought a halt to proceedings on the outer courts.

Guido Pella, the 22nd seed, ended his three-match losing streak in the first round at Melbourne Park with a 6-3 7-5 6-4 win over John-Patrick Smith.

Serena Williams was asked following her first-round victory if her young daughter Olympia was able to understand the magnitude of her achievements yet.

“Sadly no. She only cares about Play Doh and Qai Qai (her doll). I try and tell her I’m somebody... around town I’m just known as Olympia’s mom,” Williams said.

OSAKA SHINES WITH DAD WATCHING ON

A victory to kick off her title defence was doubly sweet for Naomi Osaka with a special guest cheering her on from the crowd. “My dad watched my match from my box for the first time during a Grand Slam. I feel so happy,” the 22-year-old tweeted.

OSAKA INTO SECOND ROUND

Defending champion Naomi Osaka overcame swirling winds and a tough opponent in Maria Bouzkova to advance to the second round with a 6-2 6-4 victory.

Osaka relied on a powerful serve and blistering forehand to get herself out of trouble and overcame 28 unforced errors while she broke the Czech twice in each set to seal the win.

SPAIN’S BADOSA FIRST INTO SECOND ROUND

Paula Badosa became the first player into the second round with her 6-1 6-0 demolition of Swedish qualifier Johanna Larsson in just 57 minutes on Court 22.

American-born Badossa, 22, will face either Katerina Siniakova or seventh seed Petra Kvitova in the second round.

Canada’s Milos Raonic has had a late change of opponent for his first round match on Monday after Moldova’s Radu Albot withdrew, organisers said.

Albot has been replaced in the draw by lucky loser Lorenzo Giustino of Italy for the clash on Court 19.

Play got underway on all courts on time although the Bureau of Meteorology has forecast heavy rain throughout the day with a high of just 21C (69.8°F).

Smoke from bushfires that affected qualifying has dissipated and Victoria’s Environmental Protection Agency rated the air quality as good.

46 dead, 16 hospitalized after trailer of migrants found
22 minutes ago
Stockbrokers permitted to operate their own TMS for online trading of shares
2 hours ago