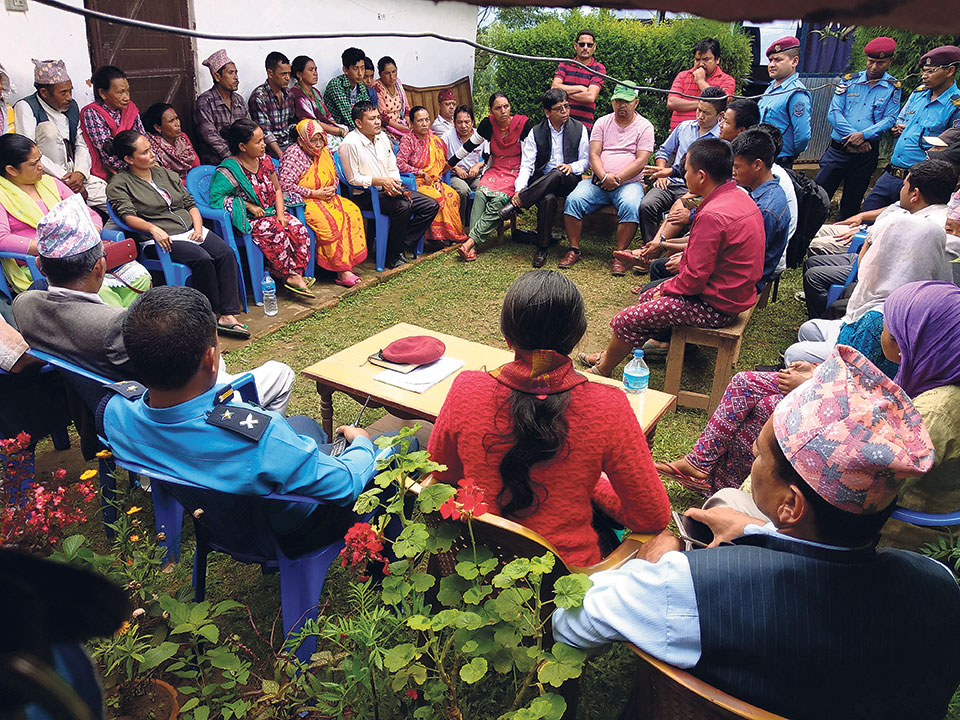 An all-party meeting in Bhojpur's district deadquarters to give justice to a Dalit family beaten after one of its members married a girl of other caste. | Photo: Republica

BHOJPUR, Aug 16: Members of a Dalit family from Arun Rural Municipality-4 of Bhojpur, who arrived in the district headquarters demanding security after being displaced from their village, has returned home after security assurance and legal action against the guilty.

The family from Charambi village agreed to return home after an all-party meeting initiated by District Police Office (DPO), Bhojpur assured them of justice and safe environment to live in the village, according to one of the victims Raju Darji.

Nishan Darji had married a girl from a different caste. The family members of the girl rejected the inter-caste marriage and attacked the Dalit village last week, indiscriminately beating up several people of the village.

The bride's family beat up villagers including a nine-year-old child as well as 62-year-old elderly. They also took back the bride on the same day of the wedding.

The Dalit community remained fearful following the attack. The victims then went to the district headquarters seeking security and justice.

The victims made them aware about the incident of beating after Nishan and the girl from a Rai community got involved in love marriage.

“They continued to threaten us after the bashing. So we had no choice but to leave the village and come here for justice,” said Durga Darji, the mother Nishan, in the meeting. She also showed them the wounds from the beating.

After listening to the victims, the all-party meeting assured the family that legal action would be taken against the guilty and requested them to return home. Rural Municipality Chief Karki assured that the family would have safe environment in the village.

“We did not know the magnitude of the incident. Now that we are aware of it, we'll not leave any stone unturned to make the village safe for them,” said Karki.

Ward Chairman Rai said they have already initiated efforts to make safe environment in the village. “The Dalit settlement would be safe from such incidents,” he added.

Police have already arrested three persons for their involvement in the incident, informed Keshab Thebe, chief of the DPO.

The construction of Dalit Museum in Gaunsahar of Thumkidhada is about to finish. With the establishment of the museum, the... Read More...

13 years on, society yet to accept Maoist leader who married a Dalit girl

NUWAKOT, March 8: Developing Nepal as a secular state by eliminating caste discrimination was one of the popular slogans of the decade-long... Read More...

Foreign envoys and diplomats taking part in ‘hiking’
6 hours ago