Annual report of Department of Food Technology and Quality Control 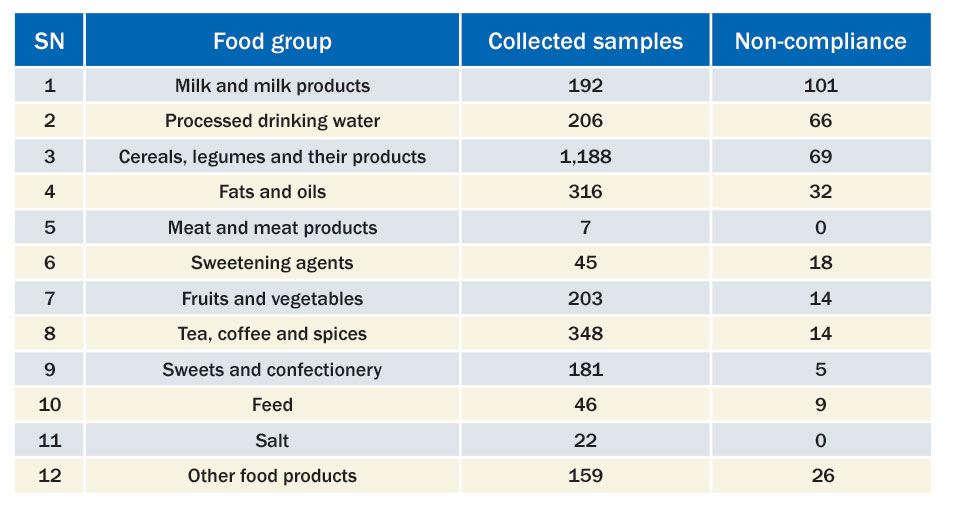 KATHMANDU, Jan 14: Milk and milk products have highest rate of non-compliance with quality standards, according to the Department of Food Technology and Quality Control (DFTQC).

A compilation of market inspection activities carried out by the department in Fiscal Year 2017/18 shows that 52.6 percent, or 101 samples, of the 192 samples of milk and milk products collected during the year from 36 districts failed to meet quality standards.

The samples were collected by the department in Kathmandu Valley as well as its divisional offices in Biratnagar, Hetauda, Bhairahawa, Nepalgunj and Dhangadi.

Earlier on June 11, the Ministry of Agriculture and Livestock Development conducted surprise inspections of different dairy producers, including the state-owned Dairy Development Corporation (DDC), in Kathmandu Valley. Lab test of samples collected during the inspection confirmed presence of coliform in 33 out of 36 samples.

As findings of the lab tests was covered with great prominence by leading media outlets, it had caused demand for milk and dairy products to fall across the country, say food technicians. Talking to Republica, Narayan Prasad Devkota, chairman of Central Dairy Co-operative Association Ltd, Nepal (CDCAN) said that daily demand for milk had come down by as much as 80,000 liters following the surprise inspection of dairy producers by the ministry.

The country produces around 4.9 million liters of milk every day. Around 700,000 liters of the total production is estimated to be consumed by general people after it is processed by dairy producers.

Likewise, processed drinking water comes second on the list in terms of non-compliance with quality standards. Of the 206 samples of processed drinking water collected by the department from six districts, 66 were found to be substandard. Next on the list is cereals, legumes and their products. According to the department 69 of the collected 1,188 samples were found to be substandard.

Market inspectors had collected samples from food markets, supermarkets, groceries and food/feed industries, among others.

"Altogether 2,813 food samples were collected during inspection from 36 districts. Of the total samples, 12.58 percent failed to meet the prescribed quality standards prescribed by the department," the report states.

The department had filed 263 cases against firms, whose products failed to meet its quality standards, in FY2016/17.