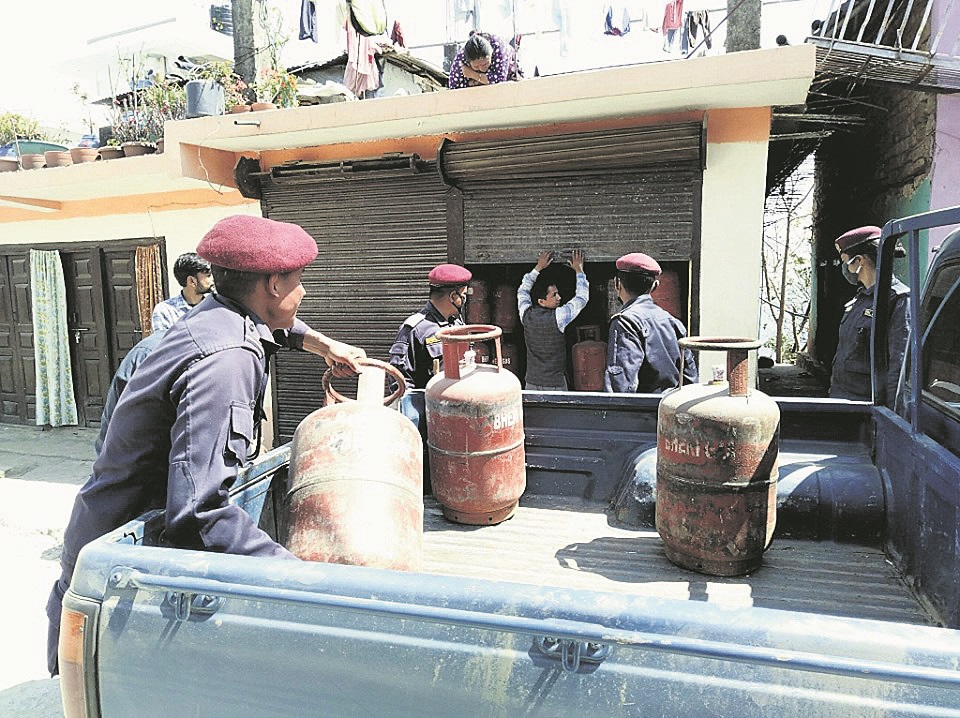 Police confiscate and load LPG cylinders hoarded by dealers onto their motor vehicle.

DAILEKH, March 22: Following the government's direction to suspend long haul transport and close educational institutions and government offices as announced on Friday, Dailekh has started seeing shortage of  liquefied petroleum gas (LPG). The government had made the decision to restrain the spread of the coronavirus (COVID-19) in Nepal.

After the locals complained about the shortage of LPG in the market, a team led by the assistant chief district officer had monitored the market. The LPG cylinders were seized after the team found full cylinders in the shops that had reported shortages of cooking gas, according to Indra Bahadur Chhetri, assistant chief district officer of the district.

The dealers said that the shortage of LPG cylinders originates from the company itself. The dealers have said that all the cylinders for sale have been sold. Due to the lack of constant market monitoring, there are shortages of not only LPG cylinders but also other essential goods in Dailekh.

The price hike of goods in the rural market has been impacting consumers of the district. Officials of the District Administration Office said that, they have been staying alert to avoid the shortages of goods in the market of the district. Chief District Officer Yubaraj Kattel informed that the people responsible for creating artificial shortages will face necessary action according to the law.

DAILEKH, Nov 23: Amar Bahadur Thapa of the ruling coalition has won in Dailekh-1. Thapa, who is also the Karnali... Read More...

Woman in labor rescued by locals in Dailekh

DAILEKH, Aug 22: Women of Bhairabi Rural Municipality in Dailekh rescued a pregnant woman who was suffering from labor in... Read More...

DAILEKH, Nov 28 : Two persons killed and six others were injured when a jeep met with an accident at... Read More...