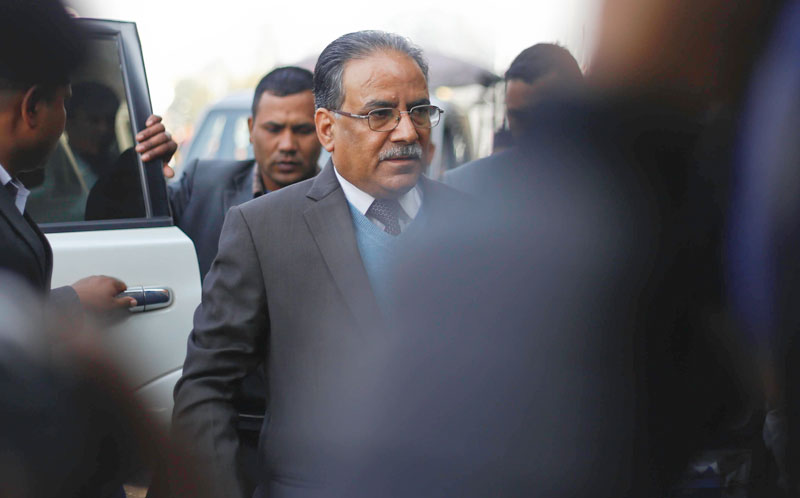 KATHMANDU, July 30: Chairman of CPN (Maoist Center) Pushpa Kamal Dahal, who is preparing to form a new government under his leadership, has revealed the 'reason' for withdrawing his party's support to the KP Sharma Oli-led government.

Dahal spilled the beans during the meeting held among the leaders from Nepali Congress, CPN (Moist Center) and United Democratic Madhesi Front (UDMF). The meeting was held to appease the agitating UDMF to join the new government.

During the meeting, Dahal claimed that a government under his leadership is being formed to resolve the Madhes issue.

Requesting the UDMF leaders to join the new government, Dahal said, “The current political scenario was formed to fulfill the demands of agitating communities.”

According to source, Dahal told the Madhesi leaders that a government is being formed under his leadership to resolve the Madhes issue and requested them to join the new government.

“36 rounds of talks that were held between UDMF and the government were outcome of our initiatives,” Dahal told the meeting, “This political equation was formed to resolve the Madhes issue.”

But, the Madhesi leaders said that they will not join the new government immediately, but will support it from outside.

For that, the UDMF has presented two pre-conditions.

According to the source, formation of a probe committee by the first meeting of Council of Ministers after formation of the new government, announcing protesters killed during Madhes Protest as martyrs, compensation to victim’s family and treatment to the injured among others.

Likewise, the UDMF has demanded a written commitment on addressing their demands by amending the constitution and reject the report by the commission on local bodies numbers and demarcation.

Both, NC and CPN (Maoist Center) have accepted both the pre-conditions.The parties have also formed a nine-member committee to prepare a draft to discuss on addressing the UDMF's demands and their involvement in the next government.

Meanwhile, UDMF has finalized the names of leaders to represent the committee. According to Keshav Jha, Hridayesh Tripathi of Tarai Madhes Democratic Party (TMDP) and Rajendra Shrestha and Kumar Lignden of Federal Socialist Forum-Nepal will represent the UDMF in the committee.

BANEPA, Feb 2: At a time when the government is facing tough time deputing civil servants to the public offices in... Read More...