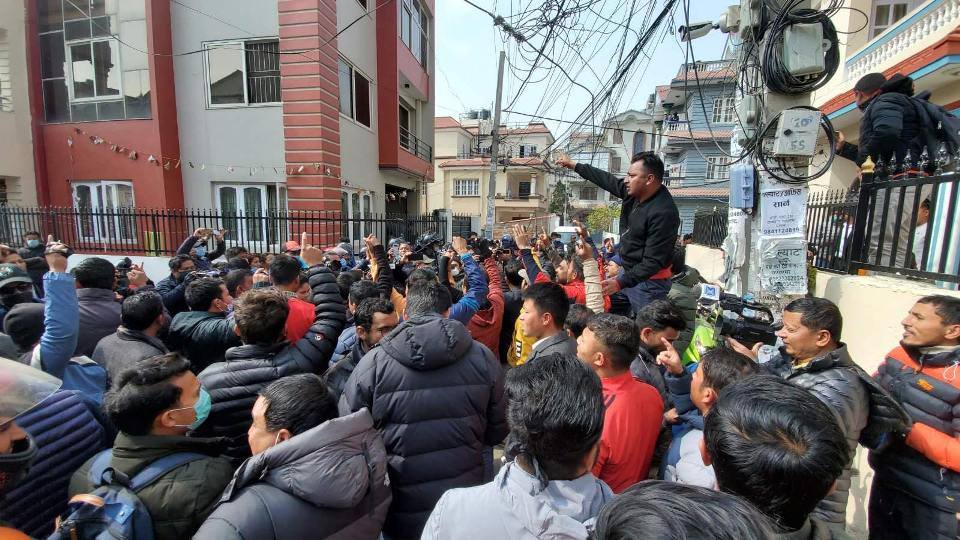 KATHMANDU, Feb 11: Cadres of the Dahal-Nepal faction of the Nepal Communist Party (NCP) have staged demonstration at the residence of NCP leader Ram Kumari Jhakri as police reached her residence earlier this morning to arrest her without an arrest warrant.

A team of police reached the residence of Jharki at Sankhamul in New Baneshwar to arrest her earlier this morning. “Police should come to arrest me with an arrest warrant,” Jharki told reporters who reached her residence after police came to arrest her.

The number of cadres protesting outside her residence has started to increase. The protesters are chanting slogans against Prime Minister KP Sharma Oli and President Bidya Devi Bhandari.

Following a controversial remarks from Jharki on President Bhandari, police had called the leader from the Dahal-Nepal faction to furnish clarification. Jhakri had made the ‘controversial’ remarks on Bhandari a week ago at a program in Gorkha district.

Speaking at the event, Jhakri, who is an emerging leader of the rival faction of the NCP, recently broached the 'White Sari' issue, stating that it was ill-intended to present President Bhandari in a white sari during elections.

Arrest warrant issued against Jhakri for "crime against the state"

KATHMANDU, Feb 11: Police have handed an arrest warrant to Ram Kumari Jhakri after the cadres of the Dahal-Nepal faction... Read More...

Police reach residence of Ram Kumari Jhakri to arrest her

KATHMANDU, Feb 11: Police have reached the residence of Ram Kumari Jhakri to arrest her ... Read More...