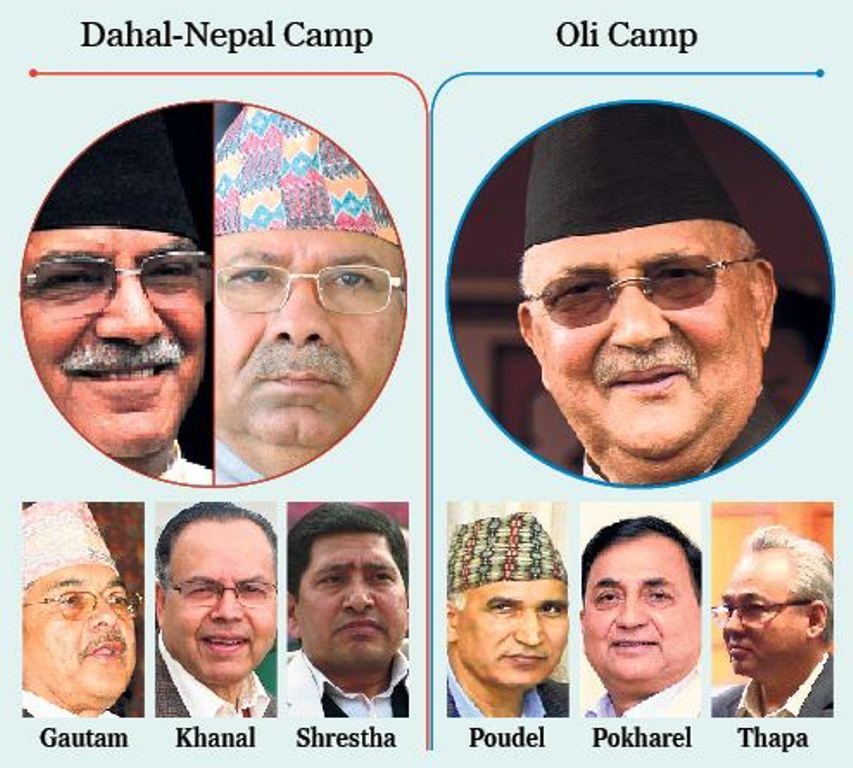 KATHMANDU, Jan 21: After weeks-long wrangling between the two chairmen, the ruling Nepal Communist Party (NCP) on Sunday unanimously decided to pick Agni Sapkota – a preferred choice of Chairman Pushpa Kamal Dahal – as the party’s candidate for the Speaker of the House of Representatives (HoR).

Although some may dismiss this as any other decision taken by the party, NCP leaders say this not only indicates a changing equation within the party but also paves the way for a possible long-term alliance between Chairman Dahal and senior leader Madhav Nepal within the party to ensure a check against Chairman KP Oli.

Chairman Oli, who also holds the portfolio of prime minister, insisted till the end to field his trusted lieutenant Subas Nembang for speaker. But since Dahal was under pressure from leaders of his erstwhile party CPN (Maoist Center) not to relinquish the post of speaker, he was not in a position to back Nembang.

NCP insiders say Chairman Oli, who had been taking almost all decisions of both the government and party unilaterally so far, was eventually forced to give in to Dahal’s demand to field Sapkota for speaker due to the changing equation within the party’s Secretariat and Parliamentary Party. The equation changed after five of the total nine members in the NCP Secretariat backed Dahal’s proposal to field Sapkota.

While Gautam, Poudel and Pokharel usually stood in favor of Oli, Khanal, Nepal and Shrestha were close to Dahal. A leader belonging to the erstwhile CPN (Maoist Center), Thapa, who holds the portfolio of Home Minister in the cabinet, is seen more loyal to Oli than to Dahal in recent months.

Under pressure from senior leaders close to him, Dahal also rejected the proposal of making Bhusal the new speaker. There was a reading within the Dahal camp that Oli was attempting to elect Bhusal to retain Thapa in his camp.

Dahal instead proposed the names of either Sapkota or Haribol Gajurel as the candidate for the House speaker that fell vacant after then Speaker Krishna Bahadur Mahara of the Maoist faction was forced to step down following allegations of rape attempt.

Concerned over the fact that five of the nine Secretariat members including Dahal, Nepal, Gautam, Khanal and Shrestha had held a meeting at the residence of senior leader Bamdev Gautam in Bhainsepati on January 8, Chairman Oli then proposed taking a decision regarding the House speaker through a parliamentary party meeting of the NCP. Minister for Health and Population Bhanu Bhakta Dhakal – a confidant of Chairman Oli – even spoke in public that the candidate for speaker should be picked through a parliamentary party meeting.

But this time again, Dahal made a smart move. With tacit understanding with Nepal and Gautam, Dahal then made a proposal to select candidates of all five major posts through the parliamentary meeting if speaker was to be picked through the parliamentary party meeting, according to leaders close to Dahal. The five posts included Parliamentary Party (PP) leader, Deputy PP leader, Speaker, chief whip and whip.

Of the total 175 NCP lawmakers in the HoR, Dahal, Nepal and Gautam together have at least 109 lawmakers on their side, party insiders say.

Leaders close to Dahal said Prime Minister Oli later changed his proposal to pick speaker candidate through the parliamentary party meeting after realizing that the changed equation within the party in the aftermath of Bhainsepati meeting would make him unable to secure the required majority. They claim that Prime Minister Oli’s proposal for PP leader itself could have fallen into jeopardy had he continued with his proposal to pick speaker’s candidate through the PP meeting.

Oli’s decision to support Dahal’s pick for speaker amid pressure within the party suggests that a new Dahal-Nepal alliance is in the making. Khanal and Gautam are likely to be in the new alliance since both of them are miffed at Oli for failing to honor his pledges. Gautam, for instance, had been promised the prime ministerial berth through a new arrangement.

A senior NCP leader, seeking anonymity, said there could be two scenarios in the party’s equation in the changed context now. “In one scenario, Dahal and Nepal could reach a power-sharing agreement, while keeping both Khanal and Gautam by their side. The two leaders could make some arrangements to pave the way for Gautam to become prime minister once, while also making an arrangement to provide some important state position to Khanal in the days ahead,” he said.

If a situation arises for Dahal to contest against Oli for party leadership in the next general convention, the alliance between Dahal and Nepal is likely to continue. Although Dahal can secure votes from the former Maoists, it would be difficult for him to win enough votes from the former UML voters without the support of Nepal, who is said to have influence over nearly 50 percent leaders and cadres of the former UML faction. At present, Dahal, Nepal, Gautam and Khanal together command nearly 70 percent strength of the NCP as a whole.

How Chairman Oli will respond to the Dahal-Nepal alliance in the making in the days ahead will largely determine the future course of the NCP. But at least for now, it is clear that the alliance of Dahal and Nepal is set to keep Oli in check.

No one can become PM by making noise: Dr Koirala
46 minutes ago