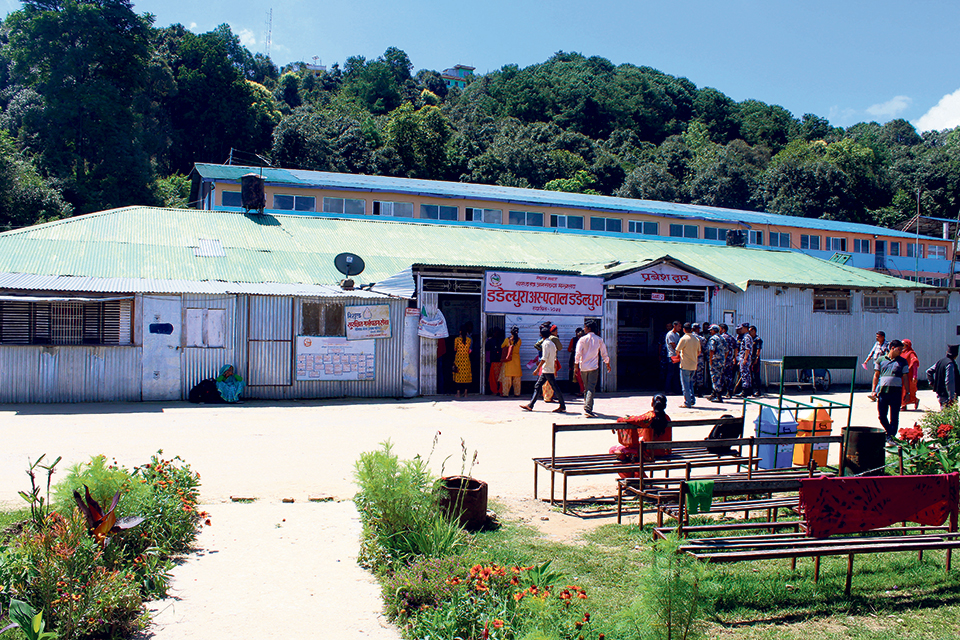 DADELDHURA, Oct 13: One of the biggest hospitals in the far west, Dadeldhura Hospital in Dadeldhura is crippling in the lack of human resources. The hospital has halted all major services including postmortem of dead bodies.

According to hospital authorities, shortage of nurses and doctors has forced patients to go elsewhere for medical service. Noticeably, dozens of patients from rural areas come here every day seeking treatment.

“We have halted services, even postmortem cannot be done anymore at this hospital,” said Tanka Prasad Adhikari, information officer of the hospital. “We feel very bad that patients, who come here with big hopes, have been forced to go away to other health facilities,” he added.

According to Adhikari, there were not enough doctors and nurses even in the past. But after the government implemented the Employees Adjustment Act-2074 BS, things turned worse for the hospital.

“The employee adjustment act was meant for fair distribution of human resource but in the medical sector, this has led to a critical situation. This is very sad,” Adhikari noted.

There has indeed been human resource crisis in several hospitals across the country since the last few weeks. Republica earlier reported of a number of such hospitals that were left struggling after their doctors were transferred elsewhere.

Instead of going to the next posting, some have been making rounds of the Health Ministry in Kathmandu seeking posting in their desired place. This has also led to a chaos in the health sector.

Requesting anonymity, an official at the Health Ministry stated that implementation of the act has triggered panic among health officials. “Health officials from various corners of the country are meeting concerned department head seeking transfers to their desired place. You can see a huge crowd at the ministry these days, for none other than this reason,” he said over phone.

Adhikari stated that the hospital has demanded for more doctors and nurses with the federal government. He added that agitated locals have warned of protest if the services are not resumed in the hospital at the earliest.

“Service seekers get furious. They think we are depriving them of services willingly. They have warned of launching protests,” he said.

The hospital presently has only one doctor. Along with that only two nurses are at service and a few health workers. Though the hospital has a quota for 19 medical officers, no one has sought posting at this hospital, according to Adhikari.

According to Narayan Joshi, information officer at the hospital, the hospital is not aware of officials that will replace the doctors and nurses who have been transferred elsewhere.

“Many of our doctors and medical staffs have left the hospital following their transfer orders. But we are not aware about their replacement,” he said.

Joshi stated that maternity health unit is severely hit due to the lack of doctors. This has affected safe motherhood program of the government.

“We have not been able to give services to patients. Services of several kinds have been halted. Most hit is the maternity health unit,” he said.

Joshi said that the hospital is now functioning just as a primary health post where complaints of minor fever, cold and cough are addressed.

KATHMANDU, July 19: As the number of cases registered at the Supreme Court keeps increasing, officials in the judiciary and... Read More...

200,000 district residents depend on an understaffed 15-bed hospital

ROLPA, June 27: The Rolpa District Hospital, which is supposed to provide medical care to 200,000 residents of the district,... Read More...