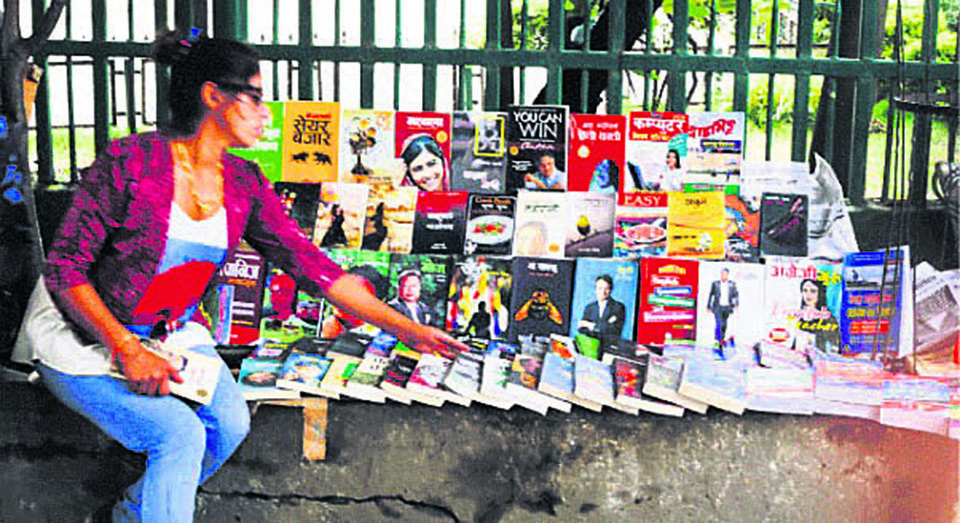 KATHMANDU, July 28: Despite widespread criticism from academics, intellectuals, publishers, sellers, and ordinary citizens, the government seems to be obstinate toward imposing 10% customs duty on the import of books.

Vijaya Karki, a theater artist, wanted to buy ‘Sapiens’ by Yuval Noah Harari. She went to two noted bookstores at Jamal in Kathmandu, but could not find the book. At last, she found it at a less known bookshop and bought it. However, she did not get the usual discount, which would be five percent at the minimum.

“Not finding a famous book to buy, and not getting the usual discount when you ultimately find it, is very discouraging for readers like me,” Karki told Republica.

Likewise, surgeon Baburam Paudel, who often purchases bestsellers and new books in the market, is also facing the same problem.

“Books play a vital role in knowledge and skill sharing from one country to another,” Paudel said. “Hindering availability of books by imposing tax is very disappointing.”
“Books produce wise citizens. This decision can affect the entire reading culture of the country,” he added.

The government has shown no interest toward discussing with the stakeholders about imposing 10% customs duty on the import of books as well as 13% VAT on transportation from the current Fiscal Year 2019/20. Both these decisions have contributed in either making books unavailable or raising their prices.

“Though we have been continuously trying to communicate with the Ministry of Finance to discuss the issue, the ministry has been ignoring us,” said Likhat Prasad Pandey, president of National Booksellers’ and Publishers’ Association of Nepal (NBPAN).

Mandala Book Point, one of the major bookstores of Kathmandu, has stated that it has to return at least five customers every day because of unavailability of popular imported books.

Almost all big book shops have halted importing books. “We cannot add price to the MRP of the imported books,” said Ram Chandra Timothy, past president of NBPAN. “Because of this, there is a risk of book piracy in the country.”

“At the moment, many books of grade 11 available in the market are pirated versions of the foreign books,” a book publisher said.

The government has claimed to have introduced tax on the import of books to promote local printing industry. Earlier, 15% customs duty was levied on the bill of books printed by Nepali publishers in India and brought to Nepal. Now, as a uniform customs duty has been imposed, tax on such books has also been reduced to 10%.

“If the government wants to promote the local printing industry, it should increase tariff on the Nepali publishers who publish books outside Nepal. But here, the government has introduced a wrong policy without properly understanding the context,” said economist Posh Raj Pandey.

Pandey said that the customs duty on books will not affect the country’s foreign trade scenario as the volume of import and export of books was very low. “But, it will result in increasing the price of books, which will directly affect the ordinary book readers,” he added.

“The world economy is a knowledge-based economy now. Imposing tax on knowledge is the government’s destructive approach. The tax should be removed immediately,” Pandey said.
According to booksellers and publishers, the government should focus on encouraging investment on book publishing in Nepal so that quality books could be printed within the country.

“There is a different set of Nepali audience in places like Sikkim and Darjeeling of India who are interested to read Nepali books. We need to immediately and aggressively focus on this side of business so that Nepali publishers can make some profit,” said a member from NBPAN, requesting not to be named.

The United Nations Educational, Scientific and Cultural Organization (UNESCO) has stated that VAT and customs duty cannot be imposed on school and college textbooks. But Nepal, despite being a UN member, has violated this norm of the major UN body.

Niranjan Sharma, former assistant dean of humanities and social sciences at Tribhuvan University, said that imposing taxes on books will do no good but affect the existing reading culture of the country.

“The government should immediately rethink its decision, as it will negatively impact the reading culture that is already dwindling,” he said.

KATHMANDU, March 13: Finance Minister Janardan Sharma has said that provisions have been made for the import margin to solve... Read More...