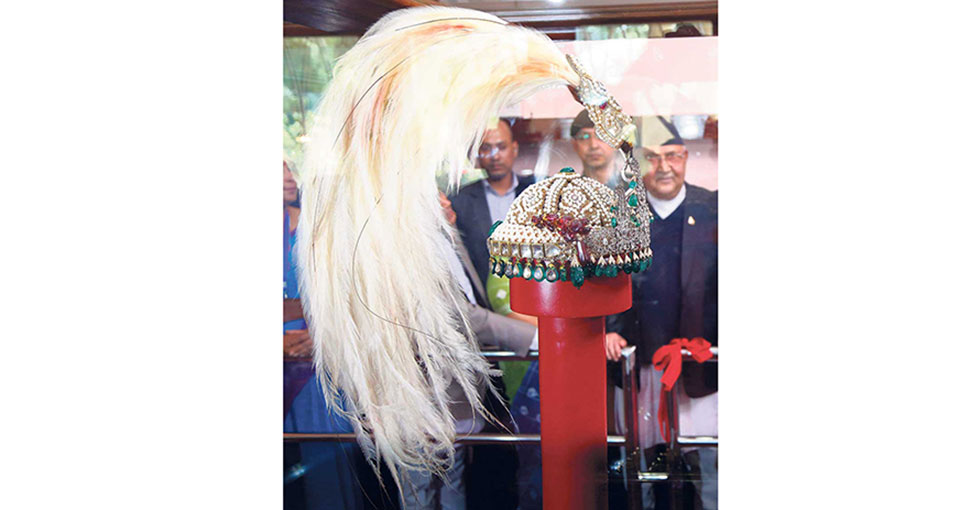 KATHMANDU, April 20: The number of visitors at the Narayanhiti Palace Museum has risen significantly after the royal crown and scepter were put on display at the museum in October last year.

Situated at the heart of the city, the museum has become a center of attraction for visitors of different age groups and art and culture enthusiasts from across the country. Also considered a learning ground for school students, the palace was opened for visitors on February 27, 2009.

Hundreds of people from different walks of life visit the museum daily. Meanwhile, only 31 of the 52 rooms of the palace museum have been opened for the public so far. "Along with the personal possessions of the ex-royals, Queen Aishwarya's personal make-up room has fascinated the visitors,” said Ram Bahadur Adhikari, a staffer at the museum. Around 45 staffers have been deployed for the surveillance of valuables at the museum. "We report to the museum department if any valuable needs repairing,” said Adhikari.

Although the museum was opened for the public in February 2009, the crown and scepter, among other valuables, were put on display nearly a decade later due to security reasons. “The crown has been kept in a bullet-proof showcase in the Rupandehi Hall. The hall is under round-the-clock CCTV surveillance from all directions,” said another staffer Bikash Maharjan.

Ashok Aryal, 19, paid his 7th visit to the museum last week. "I have visited the museum many times but every time I visit, I take home an additional piece of knowledge. That encourages me to visit the place with new friends every time.”

“I believe youths should be aware about the country's history. The palace museum is also an integral part of our cultural and historical heritage,” added Aryal.

Dipa Karna, 23, from Kirtipur, however, paid her second visit to the museum last week. Studying the architecture and grandeur of the museum was the highlight of her second visit. "Whenever we come across a place of historical significance while studying our course books, we become eager to see it and explore the place on our own,” she said.

“With additional royal possessions on display, many things have transformed inside the museum since my last visit. However, the outdoor section seems messy and ill-managed. The crown has added much charm to the museum but I think the museum management committee needs to focus on the renovation of the museum,” added Karna.

After the crown and scepter were put on display, the number of daily visitors has increased significantly. These days, the museum draws over 3,000 visitors on a daily basis. Starting from the end of February 2018, altogether 3.15 million visitors have visited the museum by mid April 2019,” said Museum Chief Adwait Prakash Shrestha. The revenue collected from national and international visitors so far stands at a whopping Rs 270.13 million.

“Our master plan is to disclose King Birendra's personal quarters, Sri Sadan and a spacious parking lot in the southern area,” added Shrestha.

“Meanwhile, we are also planning to create a mini museum at the Department of Passports which is located on the Narayanhiti premises. As per the plan, the mini museum would reflect the cultures and religious and geographical significance of the 77 districts of Nepal,” confirmed Shrestha.

GORKHA, Aug 1: The historic Gorkha Museum saw an increase in the number of visitors last year. On the basis of... Read More...