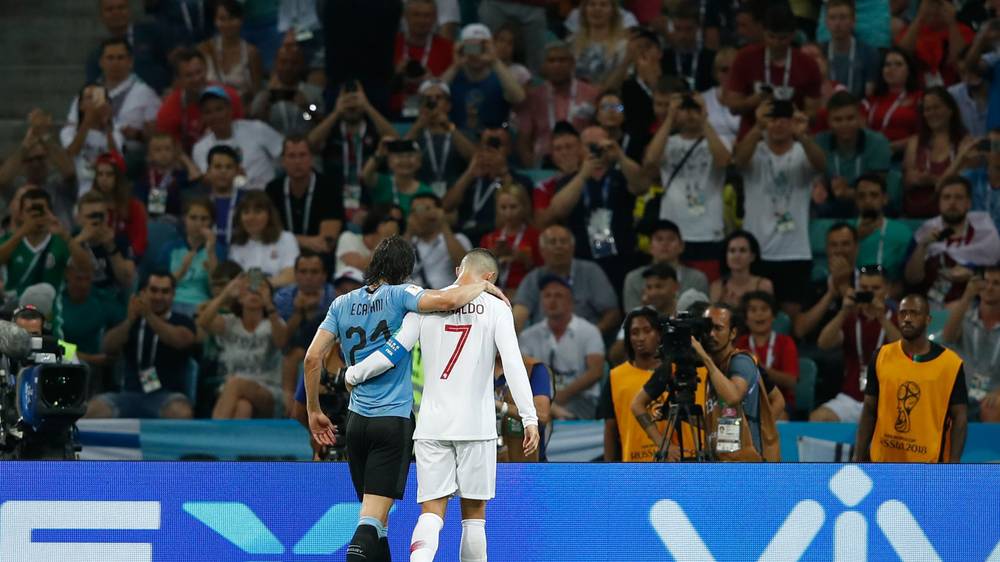 The Portugal manager, Fernando Santos, said he did not want Cristiano Ronaldo to walk away from international football after Portugal were knocked out of the World Cup by a 2-1 defeat at the hands of Uruguay. The Real Madrid forward would not be drawn on his future but offered up a message of optimism as he departed the Fisht Stadium in Sochi.

Ronaldo was unable to trouble Uruguay as they made it through to the quarter-final against France and, at 33, with a 154 caps to his name, this could represent a natural watershed. But the forward departs the World Cup with four goals and with his manager insisting that there is still a place for him in the Portugal side.

“I am convinced that he has a lot to give in football,” said Santos, whose own future is in doubt after elimination here. “There is a tournament in September, the Uefa League of Nations, and we hope that he is with us so that he can help the young players who will need their captain’s example. We have a team with many young players in it and of course we all want him there with us.”

Ronaldo, though, was not forthcoming on what lies ahead. “It’s not the time to talk about the future of the coach, the players, the squad,” he said, “but rest assured that this national team will continue to be one of the best in the world. There is a fantastic group with enormous ambition that wants to succeed and I am very confident that the national team will continue to be at the highest level.”

He added: “Portugal competed well. In my opinion we were better than Uruguay. We had chances but goals make the difference. In general terms, we leave here with our heads held high. The team has fought well. As captain, I am very proud of this group. I leave here happy. Not the way I wanted, but the sensations are good. We hold our heads up high; Portugal will continue winning things.”

The Euro 2016 winners finished second in their group, behind Spain, and meet the South American side in the next... Read More...