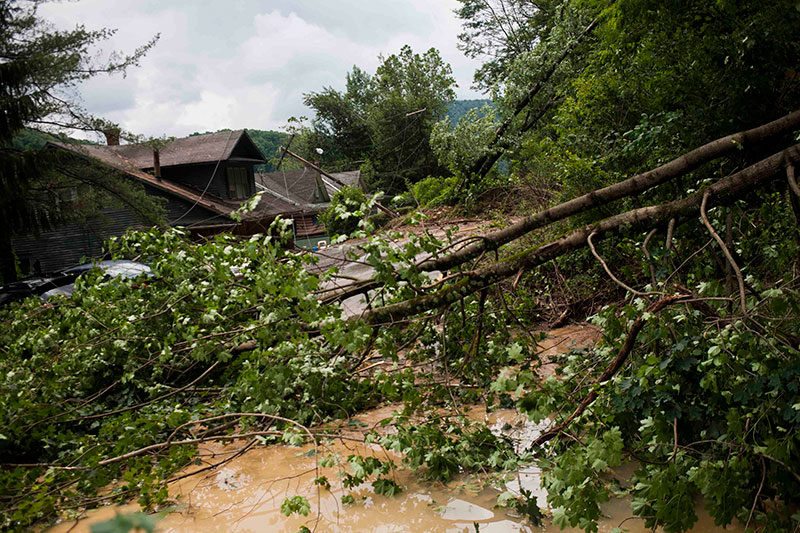 CHARLESTON, W.Va., June 25: All Karol Dunford has left is a dirty nightgown, caked in mud from the floodwaters that ravaged her West Virginia town and killed at least 23.

She lost the trailer where she lived for 30 years. She lost her wheelchair, her medicine and her best friend, a little Chihuahua named Frankie.

As the deluge swamped southeast West Virginia on Thursday evening, Dunford, 71, sat immobile in her wheelchair in her living room as the pitch-black floodwater rose past her ankles, to her knees, up to the armrests. She talked to her daughter, Randee Suzer, on the phone. She said it was silent but for the roar of the water. Dunford, an Air Force veteran of the Vietnam War, screamed and screamed but feared no one would come to save her.

Hundreds of others were stranded, too.

Teams across the state rescued people from second-story windows, the hoods of cars, the tops of trees. They saved Dunford from her flooded trailer in the middle of the night, just as the water started licking her shoulders. More than 100 homes were destroyed, some torn from their foundations and carried away. The roaring water uprooted trees, tore down bridges, washed away roads and knocked out power and phone service to thousands of homes. Families were left with nothing but the clothes on their backs.

Dunford's tiny town of Rainelle in Greenbrier County took the brunt of the devastation. County Sheriff Jan Cahill described "complete chaos." At least 15 people were killed in the county and officials fear more will be discovered as they start sorting through the rubble the storm left behind.

"This was so violent," said Wayne Pennington, the fire chief in Lewisburg, the seat of Greenbrier County. "It removed structures. It swept cars away. It destroyed trees, guard rails. It churned up the earth. It exposed water lines and broke them. It was just mass destruction on a scale I've never seen."

Pennington's crew searched into the night for people stranded. They waded through the swift current, sometimes up to their chests, to pull people to safety.

They found a 97-year-old woman standing inside her front door, with water rushing up over her porch.

"She said, 'I thought I was all alone,'" he recalled. "And one of the team members says, 'Well honey, you're not alone no more.' And onto his back he put her and grabbed her walker and away we went."

In White Sulphur Springs, some used heavy construction equipment to push through the debris and reach people trapped by high water. Joe Byers, a volunteer firefighter from nearby Lewisburg, drove a front-end loader into decimated neighborhoods early Thursday evening. They worked through the night, despite the darkness and fog, and rescued about 60 people. His team found people trapped, handed them life jackets then piled them into the loader's bucket, one-by-one, until the bucket was full. Then they hauled them to safety and drove back into the floodwaters for more.

A 91-year-old woman took a ride in his bucket. They rescued a family of five with a child in diapers.

Rescue crews went door to door to check on residents, a painstaking task that could stretch into the weekend. Once a residence was checked, a red or orange X' was marked on the home.

About 500 people were stranded at Crossings Mall, a mix of restaurants, stores and a hotel in Elkview, about 15 miles northeast of Charleston. Some had to sleep in their cars or at businesses overnight. Some escaped down a hillside with help from the Pinch Volunteer Fire Department. Others waited as crews scrambled to build a new gravel road to reach them.

Two-hundred National Guardsmen assisted in eight counties, helping local crews with swift water rescues, search and extraction efforts. Military helicopters hovered overhead and the Federal Emergency Management Agency sent in teams to assist. The governor declared a state of emergency in 44 of 54 counties and authorized up to 500 soldiers to assist.

One of the dead included a 4-year-old boy who was found about a quarter-mile from where he fell into a creek, which usually runs about ankle deep but rose to about 6 feet when Jackson County was pounded with 9 inches of rain in 16 hours.

Bob Bibbee with the Ravenswood Fire Department said the boy was outside with his grandfather, who jumped in after him. Neighbors, alerted by the sound of the family's screams, tried to help save the boy but were also unable to reach him.

Local officials in Ohio County said the death of an 8-year-old boy, Emanual "Manny" Williams, who fell into Big Wheeling Creek on Thursday, was not due to flooding but was an accidental drowning. The area around Wheeling had no flooding and no severe weather, said Wheeling Police Sgt. William Nolan. But the death was among those counted by the state medical examiner, the governor's office said.

The rest of the dead have not been identified.

Some of the heaviest rainfall was in Greenbrier County, where the Greenbrier luxury resort and golf course is nestled among mountains. The 710-room resort announced Friday it would be closed to guests until further notice. The course, overrun by floodwaters, is scheduled to host a PGA tour event July 4-10.

The PGA Tour says it is still assessing the damage to the Greenbrier and will have an update in the next few days on whether it's feasible to hold a golf tournament there in two weeks.

On Friday, residents started to pick through the rubble to save what they could.

Dunford was taken to a veterans hospital in Beckley. She'd had an open wound on her foot that sat in the dirty floodwater for hours and doctors are worried about infection, Suzer said. Once she's released, she doesn't know where she'll go.

KATHMANDU, Aug 2: The Ministry of Foreign Affairs has intensified the rescue of Nepali workers stranded abroad in course of... Read More...