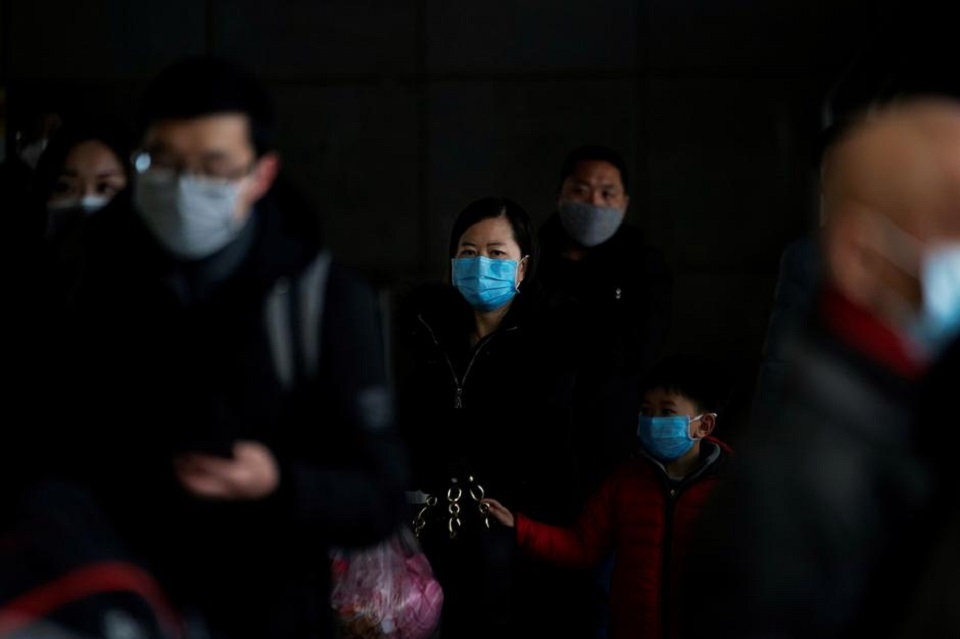 Passengers wearing masks walk outside the Shanghai railway station in Shanghai, China, as the country is hit by an outbreak of the new coronavirus, February 8, 2020. REUTERS/Aly Song

SHANGHAI/BEIJING, Feb 9:  China raised the death toll from its coronavirus outbreak to 811 on Sunday, passing the number killed globally by the SARS epidemic, as authorities made plans for millions of people returning to work after an extended Lunar New Year break.

Even on Monday, a large number of workplaces and schools will remain closed and many white-collar employees will work from home.

The scale of the potential hit to an economy that has been the engine of global growth in recent years has taken a toll on financial markets, as shares slumped and investors switched into safe-havens such as gold, bonds and the Japanese yen.

China’s cabinet said on Sunday it would coordinate with transport authorities to ensure the smooth return to work of employees in key industries such as food and medicines.

The State Council’s special coronavirus group also said workers should return in “batches”, rather than all at once, in order to reduce infection risks.

China’s ambassador to Britain described the newly identified virus as “the enemy of mankind” in an interview with BBC television on Sunday, but added it “is controllable, is preventable, is curable”.

“At this moment is very difficult to predict when we are going to have an inflection point,” Liu Xiaoming told the Andrew Marr Show. “We certainly hope it will come soon, but the isolation and quarantine measures have been very effective.”

China’s National Health Commission recorded another 89 deaths on Saturday, pushing the total well above the 774 who died from SARS, or Severe Acute Respiratory Syndrome in 2002/2003.

Total confirmed coronavirus cases in China stood at 37,198, commission data showed. New infections recorded the first drop since Feb. 1, falling back below 3,000 to 2,656 cases. Of those, 2,147 cases were in Hubei province, the epicentre of the outbreak.

The virus has also spread to at least 27 countries and regions, according to a Reuters count based on official reports, infecting more than 330 people. Two deaths have been reported outside mainland China - both of Chinese nationals.

As millions of Chinese prepared to go back to work, the public dismay and mistrust of official numbers was evident on Weibo, China’s equivalent of Twitter.

“What’s even more frustrating is that these are only the ‘official’ data,” said one user.

“Don’t say anything else. We all know we can’t purchase masks anywhere, why are we still going back to work?” said a second.

“More than 20,000 doctors and nurses around the country have been sent to Hubei, but why are the numbers still rising?” asked a third.

Authorities had told businesses to tack up to 10 extra days on to holidays that had been due to finish at the end of January and some restrictions continued.

Gaming giant Tencent Holdings Ltd (0700.HK) said on Sunday it had asked staff to continue working from home until Feb. 21.

Hebei province, which surrounds Beijing, will keep schools shut until March 1, the People’s Daily newspaper said. Several provinces have shut schools until the end of February.

Among the latest deaths, 81 were in Hubei.

An American hospitalised in the provincial capital Wuhan, where the outbreak began, became the first confirmed non-Chinese victim. The Washington Post identified him as Hong Ling, a 53-year old geneticist who studied rare diseases at Berkeley.

Joseph Eisenberg, professor of epidemiology at the School of Public Health at the University of Michigan, said it was too early to say whether the epidemic was peaking.

Major cities and capitals announced new travel restrictions as concern over the spread of the virus increased.

Chinese-ruled Hong Kong introduced a two-week quarantine on Saturday for all people arriving from the mainland, or who have been there during the previous 14 days. Malaysia expanded its ban on visitors from China.

France issued a new travel advisory for its citizens, saying it did not recommend travelling to China unless there was an “imperative” reason. Italy asked children travelling from China to stay away from school for two weeks voluntarily.

The latest patients outside China include five British nationals staying in a mountain village in Haute-Savoie in the Alps, French health officials said, raising fears of further infections at a busy period in the ski season.

Princess Cruises, operator of the Diamond Princess cruise ship quarantined off the coast of Japan, said a further six people had tested positive, bringing the total cases aboard to 70.

BEIJING, Feb 9: After making sure everyone’s face mask is on and sanitizer is to hand, the Qiao family heads... Read More...

BEIJING, Jan 29: The death toll from a new coronavirus in China rose sharply to 132 on Wednesday with nearly... Read More...

DHARAN, Jan 31: A patient admitted in the BPKIHS in Dharan and suspected to have been infected with corona virus... Read More...