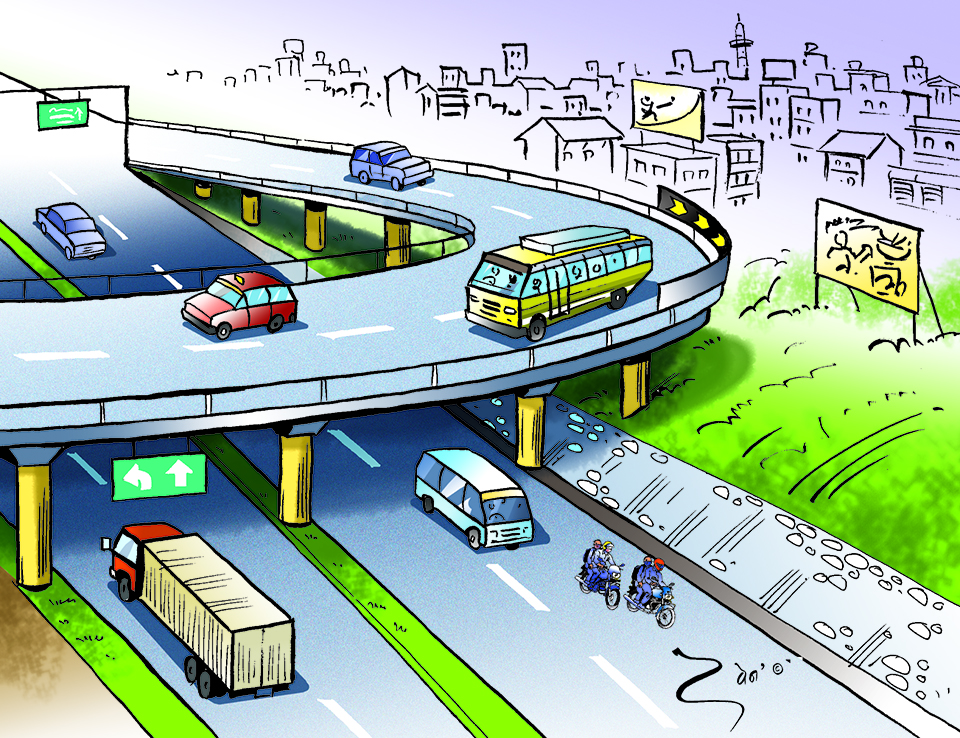 Flawed interpretation of ILO convention has resulted in a long delay of project execution and its soaring cost, making the project even unfeasible

As Nepal is embarking on path of prosperity it will need to build more roads, railway lines, hydro projects, explore minerals and facilitate foreign direct investment on various kinds of projects.  We have left behind more than two decades of uncertainties and internal conflicts and moved forward. Now we have a new constitution and an elected government with a two thirds majority. People have great expectations from the government and the government has also promised to realize the goal of ‘Prosperous Nepal, happy Nepali.’ All this sounds encouraging.

Yet the situation in the country is fraught with all kinds of risks in charting the course to realize the development vision.  The act of instigating forces of instability and deliberately fomenting conflicts by various interest groups has not subsided completely. Thus it is critical to understand this fragile situation and devise appropriate means to combat such forces.

One of the obstacles being created in development projects by various interest groups is through mis/interpretation of the right of Adibasi and Janjati people on the natural resources and the land they have been using. Development projects take abnormally long time to execute because of the conflict between the government and the private developers of the project, on the one hand, and between them and the people who claim their rights, on the other.  The right of Adibasi and janjati is often cited from international convention concerning indigenous and tribal people, popularly known as IL0 convention 169.

It is often claimed that the convention provides these people a right to Free, Prior and Informed Consent (FPIC) when any development project is launched in the territory where they live or where natural resources which are being used by these people lie. Lawyers Association for Human Rights for Nepali Indigenous People is championing this cause at the moment. The resultant effect has been not only a long delay of project execution but also its soaring cost, making the project even unfeasible.

We have had excruciating experience in the construction of Khimti-Dhalkebar electric transmission line project which took more than five years to construct just a few towers. The same situation has emerged in Marsyangdi Corridor 220 KV transmission line project. Hosts of other development projects are also facing these problems. In all these cases, the said convention is cited as giving right of veto to the Adibasi and Janjati people when it comes to utilization of their land or the natural resources they have been using.   It is, therefore, necessary to dissect the provisions of the said convention and their interpretation.

It is important to dispel the misunderstanding created through flawed interpretation of this convention.  There is a general understanding that the word Adibasi and Janjati means only those who belong to several ethnic groups, that it excludes Khas Aryas and that the convention only protects the rights of those who belong to the ethnic groups. This belief is not based on facts of ILO convention. Article 1(b) of the convention considers all those people who inhabited the country or the geographical region to which the country belongs at the time of the establishment of present State boundaries as indigenous people. In effect, it means that all the people belonging to any caste, creed and ethnic group, of course including  Khas Aryas, are indigenous people. Thus all people of Nepal can enjoy the rights that emanate from the convention.

We also need to examine the claim over Free, Prior and Informed Consent (FPIC) right in light of the provisions of ILO convention and other laws and procedures.  Does the convention really give veto right to local people to prohibit or reject the projects? One needs also to look at whether the convention restricts the involuntary displacement of people while constructing any development project.

So far as prior information and participation is concerned the procedure for Public Hearing has been laid out in the rules for preparing Environment Impact Assessment Study that is made well before launching of the project. In almost all cases, the developer works in a close association with the local people. Local people are compensated for the land and other property that is secured for the project or any material damage caused due to the project. As for relocation of the people, Article 16.2 of the said convention states “where their consent cannot be obtained, such relocation shall take place only following appropriate procedures established by the national laws.” This means involuntary displacement is possible and also that the locals do not have any right to obstruct the project or the involuntary displacement. Unfortunately, we don’t have elaborate and special laws to deal with these issues.

On the other hand, Land Acquisition Act (1977) sufficiently and clearly gives right to the government to procure any land or other property of any person by giving adequate compensation. A special committee is formed to determine the compensation which takes into account various factors including the prevailing price of such property. In most cases, property owners and project developers negotiate to reach an amicable settlement. In any case, nobody has the right of veto to delay or thwart a development project.

As regards, transparency and participation of local people, local people not only participate they also benefit from the project. The directive principles of the State policy under the new constitution include the concept of participation and benefit sharing with the local people in the development project. In fact, it is being practiced on the ground. Yet, our projects get delayed due to the unnecessary and illogical hype of the rights wrongfully interpreted by some people with vested interests.

Considering the situation of Nepal and its social composition of people, it can be said that ILO convention is irrelevant for Nepal. Nepal has always remained a sovereign country and no outsider has colonized us unlike countries like Australia, Canada or United States where many tribes and indigenous people, who were colonized by the outsiders, live and who are very much different from the general populace of the nation.

Nepal is a home to many ethnic groups, including especial community of Raute. The ILO convention includes every one. Thus we cannot differentiate one community of people from the other by citing the said convention. To emphasize it once again, ILO convention has become irrelevant in our case. The fact that less than 25 countries—and none other than Nepal from South Asia—have ratified this convention speaks for itself.

Bangladesh needs to transition from conventional energy sources to ensure its energy security and long-term sustainability in the near future.... Read More...

The formation of electoral alliances and its consequences for the making and breaking of coalition governments, party splits, defections, horse-trading... Read More...