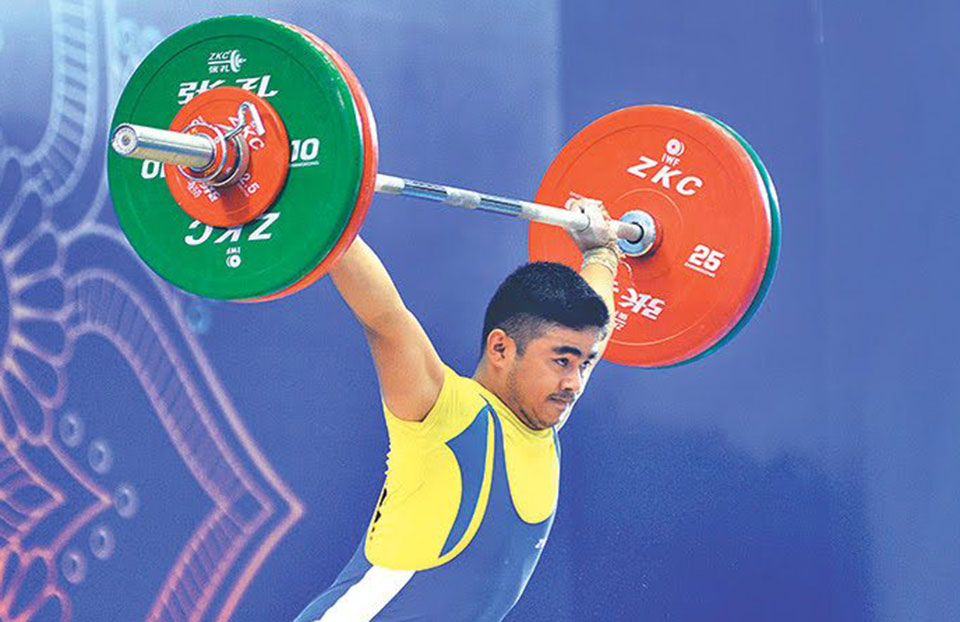 Prakash KC, winner of the eighth national games in weightlifting, admits that he never thought he would become a sportsperson. He started weightlifting at the age of 13 and since then he has often been winning the title of Junior Best Lifter Men in the national level. Recently, at the eighth national games, he broke the record by lifting 224 kg in the 67 kg body weight category. However, his personal best is 242 kg.

KC’s father and his friends, all national-level weightlifters from Nepalgunj, encouraged their sons to give weightlifting a try, to carry on their legacy. KC says his father wanted him to follow in his footsteps and soon enough he found himself giving in and listening to his father.

“My father and his friends wanted to train us and make us strong enough to represent our hometown in national level games,” he says adding that soon after his training began he started securing gold medals and got selected in many international tournaments as well.

But all this glory comes at a price and KC says staying away from home is never easy. “It’s fun to visit a new country and experience the culture there. But I always miss my family and friends,” he says adding that they are his pillars of strength and it’s because of them that he feels motivated and has the zeal to carry on.

His weightlifting journey, so far, has been a rather exciting one. He recalls a particularly memorable moment when he was participating in junior category and expected to come in second or third at most but actually ended up receiving gold in both junior and senior category.

“Beating seniors, those who were more experienced than I was, in my second tournament felt really good. I knew I shouldn’t let the win get to my head so I took it as a positive sign of what was to follow and started training harder to better my game,” says KC. Following this extraordinary performance, he was selected in the Youth and Asian Championship in Qatar.

Weightlifting does come with a fair share of risks, but KC confirms that he has never sustained any major physical injuries. What weightlifting has done is teach him the value of discipline, patience, and hard work.

KC says that all those times when he has received gold medals are priceless for him but there is still that one moment that outshines them all. “There was a time when I had to travel to participate in a competition and due to some ticketing error my team left without me. I had to find my way and it was quite an adventure, asking for directions from Lucknow to Delhi to Guwahati. It was a learning experience as well,” he says.

However, it’s not all been an upward climb. Though KC was selected in the Nepal Police and he was winning all games and competitions, he was having a hard time managing his studies.

“It was hard juggling my trainings and studies. I had to travel to Kathmandu quite often and it affected my studies,” he says adding that he had to put in extra effort to do well in his studies because he was never a good student to begin with. “I didn’t want people to says my education was suffering because of weightlifting,” he says.

KC says he got into weightlifting because his father convinced him to take it up but, over time, it has become a passion and now he is serious about pursuing it professionally. But he feels weightlifting, or any other sport, for that matter, shouldn’t be the main profession for anyone. Like with other sports, in weightlifting too there are many setbacks and challenges in Nepal. According to KC, there’s a lack of equipment and technological advancements in the field. And until and unless you are selected in the national team, all expenses are yours to bear.

“You should always have a backup plan,” he says adding that if you are studying or already have a stable job, it would be a wise idea to continue studying or working.

KC, who is inspired by Chinese weightlifter Lu Xioajun whose techniques KC finds to be perfect, always credits his success to his father. Besides persuading him to take up weightlifting, his father also made sure KC had his full support. “He used to stay with me throughout my training sessions and meticulously planned my diet at home to ensure I was fit and healthy,” says KC adding that his journey has, in a way, always been his father’s journey.

“My father’s last match was in Birgunj and I started my journey from the same place. I feel like life has come full circle for us that way and I’m continuing the legacy,” he concludes.

NEPALGUNJ, Aug 2: National Sports Council (NSC) has failed to release the details of the expenses and progress report of... Read More...