Players of Tribhuvan Army Club pose with their medals after winning the mixed team event of the 16th National Judo Tournament during the Eighth National Games on Tuesday. (Right) Players of Army and Police compete during the 28th men and 9th women boxing tournament. Photo Courtesy: NSC

KATHMANDU, April 17: Departmental team Tribhuvan Army Club won gold medal in mixed team events on the last day of the 16th National Judo Tournament on Tuesday, under the Eighth National Games. But Nepal Police Club dominated the medal tally with seven golds, one ahead of Army.

Six players featured from each team and the game finished 3-3. Army was ahead on the basis of score.

Kabbadi
Army and Province 5 will battle for gold in National Kabbadi Championship. At Bansgadhi Kabbadi Academy in Bardiya, Army defeated Gandaki 38-21 in the semifinal to book the final clash with Province 5 who defeated APF 35-28.

In women’s kabbadi, Army defeated Sudurpaschim 49-17 to reach the final. Army will face Police for gold medal who overcame Province 5 34-24.

The finals will be played on Wednesday.

In women’s basketball, Police beat Sudurpaschim 55-44 to set up summit clash with Province 3 who stunned Army 39-23.

Badminton
Army’s Nangsal Devi Tamang and Ratnajit Tamang have advanced into the quarterfinals of women’s and men’s singles respectively in the ongoing 40th Badminton National Tournament.

In men’s singles, APF’s Dipesh Dhami reached the next round beating Province 3’s Ramesh Shrestha. The other APF players to go through were Gautam Kathayat and Bijit Thapa Magar who defeated Province 5’s Bishwas Nepali and Niranjan Devkota of APF respectively.

In men’s 56 kg final, APF’s Puran Rai won the gold medal after getting a walkover from Province 1’s Surendra Rai.

In the men’s 54 kg final, Army’s Tej Bahadur Deuba won the gold on the basis of points against APF’s Bikram Pariyar.

Also, Army’s Ganesh Pradhan and Province 6’s Manohar Basnet will take on each other for the men’s 81 kg title, while APF’s Gokul Gurung and Army’s Arjun Sigu will vie for the men’s 91 kg title.

In the women’s 57 kg final, Army’s Chandrakala Thapa and Province 1’s Diya Limbu will compete, while Sangeeta Sunuwar of APF and Sabina Shrestha of Army will vie for the women’s 60 kg title. 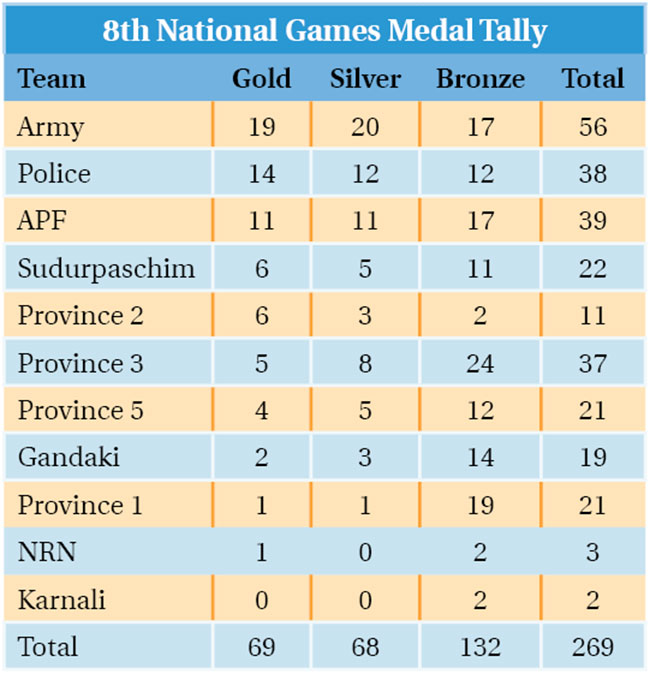 Prakash KC, winner of the eighth national games in weightlifting, admits that he never thought he would become a sportsperson.... Read More...