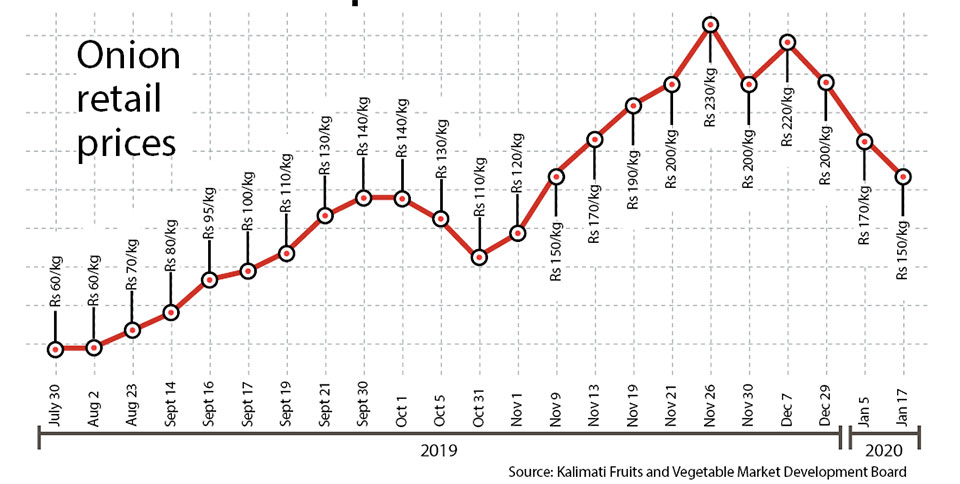 KATHMANDU, Jan 18: According to the Kalimati Fruits and Vegetable Market Development Board, the price of onion has decreased by 32% from the record high price of Rs 230 on November 27. The price of onion is now Rs 150 per kilo in the market which has helped to provide some relief to the consumers.

The Indian government had banned the export of onion on September 29 as the country faced shortage of the crop owing to a sharp decline in the harvest. According to the Indian media, heavy rainfall this year destroyed the crop, resulting in the shortage of onions.

According to Binaya Shrestha, deputy director of Kalimati Fruits and Vegetable Market Development Board, the Indian side has relaxed on the export of onion and strict checking near the border area has also decreased. “The Indian government has not removed the ban on export of onions but there is smooth supply of onion in the Nepali market,” said Shrestha.

According to officials of Kalimati Fruits and Vegetable Market Development Board, 50 to 55 tons of onion is imported from India on a daily basis. As the Indian supply eases up, the import of onion from China has reduced. The import of Chinese onion is not regular but daily import is around 35 tons.

“After the Indian government banned export of onion, the import of onion from China increased but Nepalis do not prefer it,” said Shrestha, “In the present condition we have enough Indian onion and there is no shortage of onion in the market.”

Nepal relies on the southern neighbor for almost 98% of supply of onion, an essential kitchen item for Nepal's households.