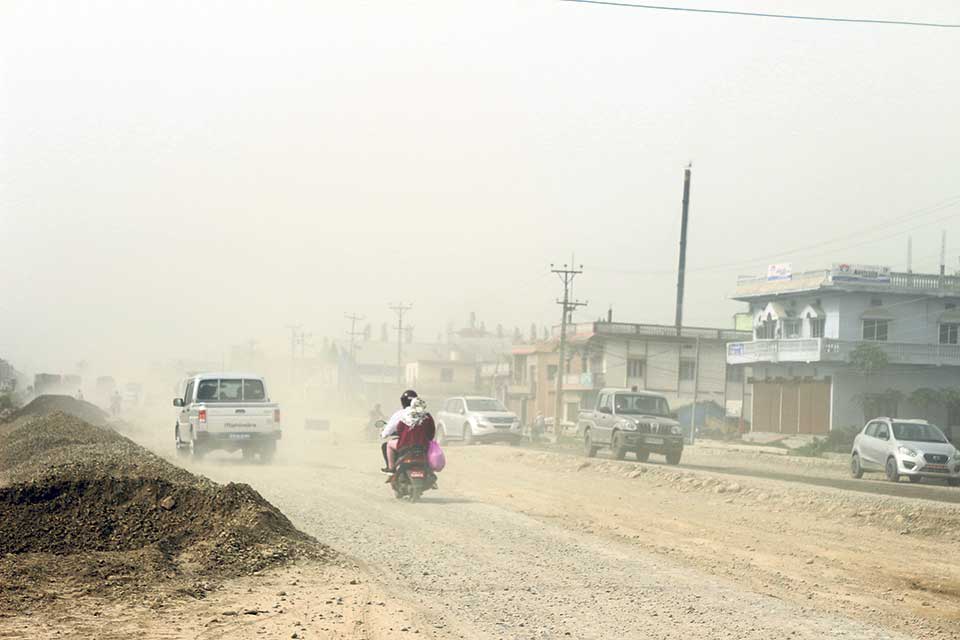 BUTWAL, Oct 25: Upgrading of the Butwal-Baheliya road stretch to six-lane highway has been ongoing for the last six years. Thousands of vehicles ply through the road every day. This 27-kilometer long road connects to the second biggest business border point of the country. The same road connects to Lumbini through Butwal-Bhairahawa road. However, a road of this level of importance is in a sorry state due to ‘never-ending construction’. And the resulting mess has affected private and public life of people in more than one way. Industrialists and businesspersons lament that they are the hardest hit.

On both sides of the road, there are piles of stones and sand. The middle part of the road is full of small to huge potholes. In winter, dust makes it an ugly place to ply while in monsoon the entire road turns into a muddy field.

“We can’t express our problems in words, this road has made our life a hell,” said a businessperson Bishnu Bhushal from Shankarpur. “It has ruined our business but the worst thing is that we can’t open windows and doors of our home,” he added.

The dust has covered Bhushal’s house. And it has been so since the last few years, he said. Areas near the roads are no more livable due to the dust coming from the road, he said adding that they don’t have any option other than to live with that.

Apart from the pollution, he claims that he has tired of witnessing accidents on the road, which he added have become a daily affair. The dilapidated road is very prone to accident.

“Motorbikes, bus, car, jeep, name any vehicle, all are prone to accidents on this road. These eyes have witnessed many such mishaps. It is very disheartening to witness such things,” Bhushal reported.

Snail-paced construction of the road has brought life to a standstill, locals claimed. They shared that though they know that the project will benefit them and others in the future and that they should not be protesting against such development projects, the time it has taken has made them wary of it. Bhushal noted that the lethargic construction of the road widening project has adversely affected the locals.

“Being a business person, I can also figure out that the incompletion of the road has massively affected our trade and economy too. This is the second biggest custom point of our country from where goods worth millions of rupees come in and are transported to various parts of the country,” he explained. “But when the road is in a dilapidated state, transportation services are affected and that affects the whole supply chain resulting in making things costlier for the end consumers. At times even traders suffer huge loss due to transportation delays,” he added.

Concern over health issue because the dust pollution has been another major concern for the locals. Locals claim that though they don’t have accurate data, they shared that number of chest patients has grown manifold in the last few years. And they add that this has happened because of the dust from the road.

“I cannot state the number, but I can certainly tell you that people are becoming ill. Some are bedridden. And this is most certainly because of the pathetic condition of the road,” Bhushal claimed. He further claimed that locals are suffering from chest, heart, skin and eye related ailments.

“Children are increasingly affected with such ailments. They have to go through the road for going school and colleges. And the dust is taking its toll on the children and passerby health,” Bhushal said. He accused authorities concerned of neglecting the sluggish progress made in completing the project.

“If officials concerned are not worried about the toll the pollution is taking on the citizen’s health, who is going to? Due to their negligence, the country will have to suffer loss of its citizens. This is a serious issue and the government should resolve it at the earliest,” he asserted.

Concerned officials claimed that of the 27 kilometers, 11 kilometers stretch of the road has been upgraded. Chief engineer of the project, Jivendra Mishra, said that they are working on completing the project.

“The project was scheduled to complete within five years, but there have been delays. It is being upgraded to six-lane and it will be completed soon,” he added.

Though Mishra denied commenting, drainage and footpath in the section of the road that he claimed is completed, are not properly managed. Locals are not ready to call it a ‘completed’ road section.

“They say that 11 kilometers of the road section has been completely widened. But they have not realized what they have done. There are no drainages or footpath in that segment. How can they say that the road is completely upgraded,” remarked Bhushal.

Meanwhile, another local Kishor Subedi accused the government of being negligent towards public comfort and health by neglecting even the basic necessities a road should have. “Development should give you peace and comfort, but when it is done without being sensible it only gives you pain. We, who have houses near the road, have become victim of the government’s utter negligence,” he said.

Although locals are putting the blame on the government, concerned officials blame the contractor for it. “If the contractors continue to exhibit negligent behavior, we will take action against them. We have given them a new deadline for completing the project and if it is not met, we can take strong action,” he said.

Jajarkot, July 23: A drinking water project is to be constructed at Khalanga, the district headquarters of Jajarkot. ... Read More...