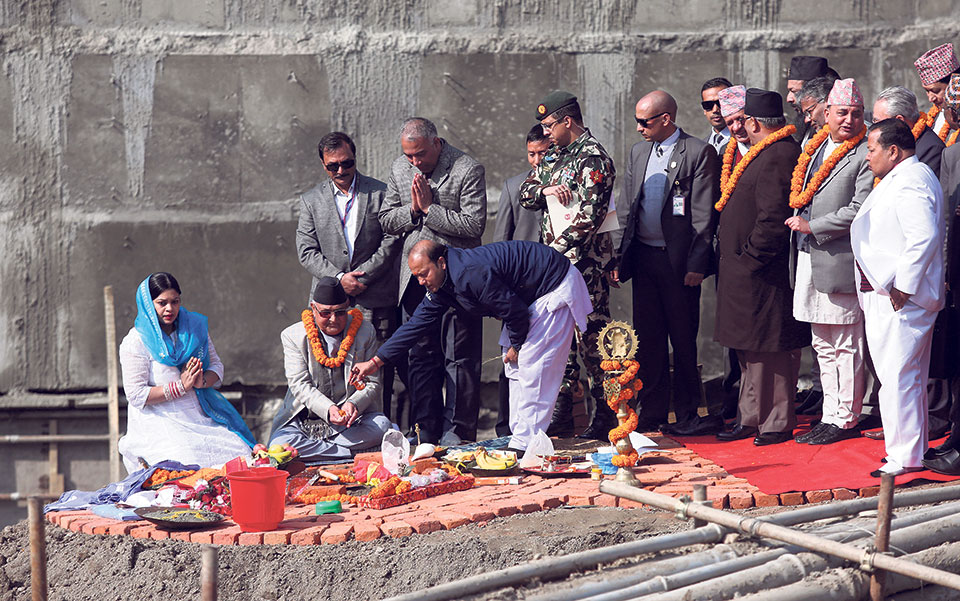 KATHMANDU, Dec 28: Prime Minister KP Oli on Thursday laid the foundation stone for Dharahara, the iconic tower in Kathmandu that was destroyed in the devastating earthquake of 2015.

With this, the reconstruction of the landmark tower has finally begun. The government has awarded the construction project to the GIETC- RAMAN joint-venture outfit. If everything goes as planned the monument will be completed within two years. As per the construction design, the new Dharahara complex will comprise a mini theater hall, a museum, a musical fountain, a food court, stone water spouts, souvenir shops and parking. The remains of the previous Dharahara will be preserved. The government has allocated Rs 3.45 billion for the Dharahara project. Nepal Communist Party Chairman Pushpa Kamal Dahal, Deputy Prime Minister and Defense Minister Ishwar Pokhrel, Home Minister Ram Bahadur Thapa, Tourism Minister Rabindra Adhikari, and National Reconstruction Authority Chief Executive Officer Sushil Gyewali were among those were present at the function.

Speaking on the occasion, Prime Minister Oli said the new Dharahara will reflect the original tower but the construction will be modern. The prime minister asked the construction company to leave no room for complaint in its work.

“Once the Dharahara is built both children and the elderly will be able to use a lift,” said the prime minister adding, “After two years we will be able to see a green and beautiful Valley from atop the new Dharahara”.

The nine-story 62-meter white tower built by Nepal’s first prime minister Bhemsen Thapa in 1825, has collapsed twice during earthquakes, in 1934 and 2015.

Local representatives blame negligence of engineers behind the delay in reconstruction

SINDHULI, April 25: Local representatives in Sindhuli have blamed the hectic process and negligence from technical staff for the delay in... Read More...

One in five Chinese Australians report attacks or threats amid pandemic, rising tensions
19 hours ago
Rampant exploitation of sand, pebbles and stones in Kaligandaki continues unabated
20 hours ago