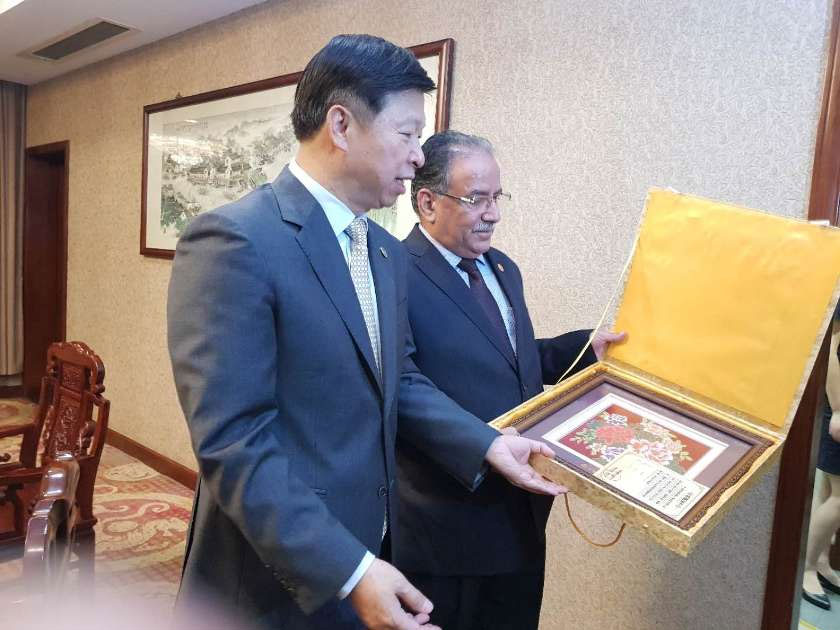 CPN Chair Prachanda is currently on a visit to the People's Republic of China.

During the meeting, Chairman Prachanda expressed happiness over the Communist Party of China's congress taking China to a new high by promoting the new 'Xi Jinping Thought.'

According to Prachanda's secretariat, the former Prime Minister on the occasion recalled both his visits to China during his premiership and the discussions as well as the understandings reached in course of the visits. He laid special emphasis on the construction of the Lhasa-Kerung-Kathmandu-Lumbini railway.
They also held discussions on the topic of Belt and Road Initiative and the CPN Chair and former Prime Minister Prachanda stated that he himself had supported the BRI proposal and signed it.

"The fruitful visit to China by the CPN 's another Chair and Prime Minister KP Sharma Oli and the transport and transit agreement signed recently by the Government of Nepal and the government of China have long-term significance. Nepal being allowed to use four Chinese seaports is a big decision," Prachanda said during the meeting with the Chinese official.

He said the objective of his this visit was to further strengthen the relations between the CPN and the Communist Party of China, as well as to get the agreements and understandings reached between the governments of the two countries implemented.

On the occasion, the CPC Foreign Department Chief lauded Chair Prachanda's contribution to the promotion of relations between China and Nepal, and the communist parties of the two countries, thanking him for that.

He said the Communist Party and the government of China were ready to extend support in the speedy implementation of the agreements and understandings as well as in the economic prosperity of Nepal.
"Repair works are ongoing to open the Tatopani transit point and the Chinese Railways Department is conducting a study on the railway," Tao said.
Chief Tao had received Prachanda when he reached Nanjing via the historic city of the Chinese Revolution, Yenan.

Chairman Prachanda is returning home this evening on completion of his four-day visit to China, according to Prachanda's secretariat.