Construction of dry port in Rasuwagadhi yet to begin 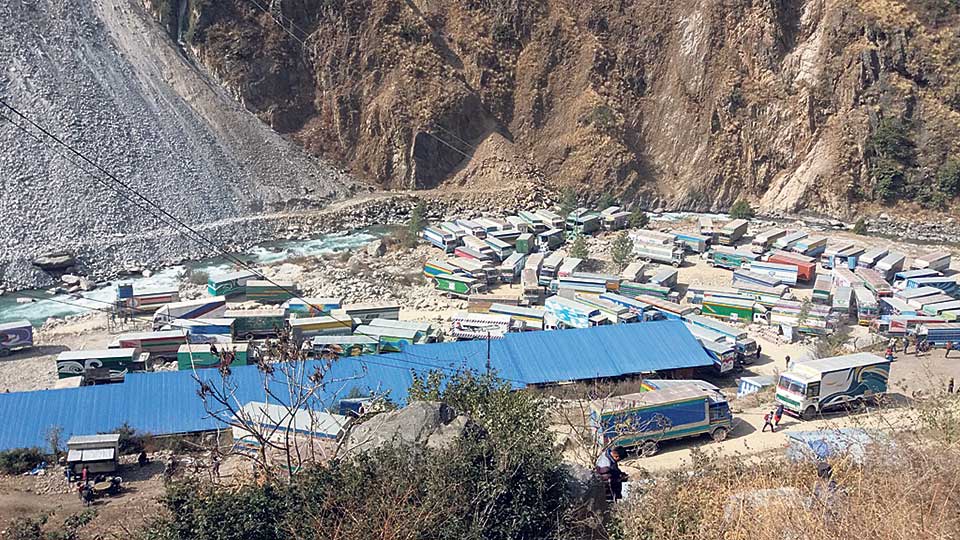 Site of the dry port at Gosainkunda Rural Municipality-2, Timure, in Rasuwa. The port will be built with Chinese assistance.

Chinese side delays work due to unknown reason

RASUWA, Oct 27: Construction of dry port at Timure in Rasuwagadhi, a custom point between Nepal and China, has failed to start. Though the construction was slated to start in October, the Chinese side is yet to begin the works. The reason behind the delay is not clear.

Nepal Intermodal Transport Development Board (NITDB), an agency under the Ministry of Industry, Commerce and Supplies, has said that the detailed project report (DPR) of the dry port has already been finalized, and the Chinese government has already selected a contractor to build the project.

“The Chinese side has already informed us about the selection of the contractor. There was also a commitment that the construction works will begin in October. They should have already started building the port,” said Laxman Bahadur Basnet, the NITDB’s executive director.

The Chinese government is building the dry port in two phases. The first phase will be carried out as per the design which has already been approved from both the Chinese and Nepali sides. Rest of the works will be undertaken in the second phase.

“As per the design, the dry port will only be able to operate, not complete. More works will be done in the second phase for the completion of the dry port,” he added.

The Nepal government has already acquired land to build the dry port that will be located at Timure of Gosaikunda Rural Municipality in Rasuwa. A total of 8.5 hectares of land, including five ropani from Langtang National Park, 58 ropani from public, and 109 ropani from government-owned land, have been acquired for the port.

The dry port is going to be built with Chinese aid. However, the Nepal government is responsible to provide security to the Chinese contractor, give custom waiver on the import of goods and equipment to build the port, and acquire the land.

This will be the second dry port in Nepal along the Chinese border. Inland Container Depot in Larcha, near Tatopani, is the only dry port along Nepal-China border at the moment. Following the completion of the Timure dry port, observers say that Nepal will be able to benefit from China’s plan to extend its railway to Kerung by 2020.

Most of the Nepali traders have been opting for Rasuwagadhi custom point instead of Tatopani, after the latter route was damaged by 2015 earthquake.

Earlier on April 10, 2015, the Nepali and Chinese governments had signed an agreement for the construction of the dry port. However, the 2015 earthquakes had delayed the process of preparing the project design. China has already declared Rasuwagadhi as an international custom point, which has resulted in an increased flow of tourists from this border point.

The board agreed on the design of the dry port prepared by the Architectural Reconnaissance and Design Institute of the Tibet Autonomous Region (ARDITAR), a Chinese state-owned company, in January. The dry port being built at an estimated cost of Rs 2 billion will have a five-storey administrative complex, a parking lot which can fit in 350 trucks, a warehouse built on 750 square meters land, two appraisal sheds spread over a total of 2,080 square meters land, a check post and other necessary physical infrastructure, bank branch, quarantine post and custom. The Chinese side has set a target to build the dry port within 30 months of the start of construction.