Construction of 14 bridges yet to begin 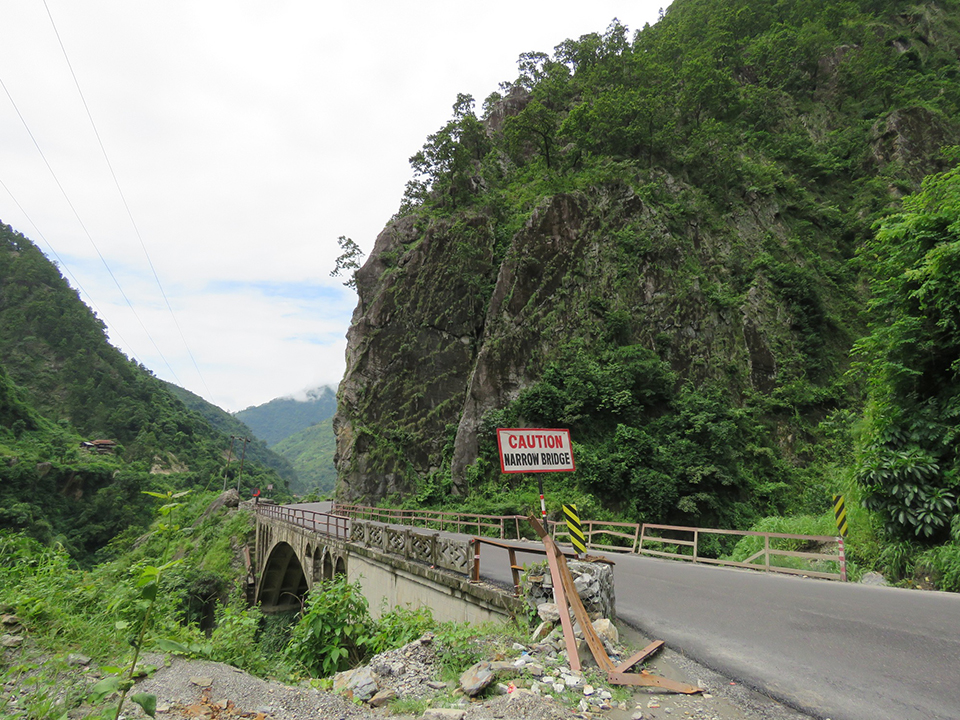 A bridge along the Narayangadh-Muglin road section that is awaiting upgrading.

CHITWAN, June 11: It has already been a year since the completion of Narayangadh-Muglin road expansion, which widened the road to 11 meters. The connecting bridges on the route, however, are yet to be developed accordingly.

And because numerous accidents have been happening around the incomplete bridge areas, the Narayangadh-Muglin Road Project has installed rumble strips near the bridges. Close to the completion of road expansion, the project office had announced that the bridges would be reconstructed within two years.

Despite the announcement, construction has started in only four of the bridges situated in Dasdhunga, Mauri, Khani, and Jalbire, and even a tender process for the rest has not been started till date.

According to Shiva Khanal, information officer of the project, the project office had agreed in constructing only four bridges. He claimed that the office has been making progress accordingly.

Lama Construction Company has taken over the construction of bridges in Dasdhunga, Mauri, and Khani, with an agreement to finish the task by August 2 this year. The cost has been estimated at Rs 136.5 million.

Similarly, Supreme Rautaha JV Construction Company has assumed responsibility for the Jalbire Bridge at the cost of Rs 139.5 million, and is expected to finish by July 22.

Khanal stated that the former three bridges would be completed by mid-July. With 82 percent of the job done at Dasdhunga, Mauri, and Khani, the bridges are very close to completion, he claimed.

"All the major works have been done, only some petty tasks remain," he said. "Vehicles shall ply the bridges by the end of current fiscal year."

On the other hand, Supreme Rautaha has finished only 44 percent of the 80-meter-long Jalbire Bridge. The work has been delayed until the end of monsoon due to a rise in the water level, the information officer shared.

The 18 bridges in this road section sum up to an aggregate length of 484 meters with most of them being over 20 meters. The bridges usually have a width of 6 meters.

There's an urgency to construct the bridges due to congestion, owing to the difference in the widths of the road and the bridges. Of the 14 bridges yet to be worked on, 10 are in a comparatively easy location, whereas the remaining four are difficult as they are situated in a complicated terrain.

Due to a regularly busy traffic, completely barring the road is not an option; the infrastructural design must therefore be planned accordingly, Khanal said. According to him, publication of the tender notice and construction agreement shall be executed by the bridge division of the Department of Roads.

Muglin, April 16: A motorable 'arch bridge' being built over the Trishuli River is coming into operation in the near... Read More...

Ruling alliance on the verge of collapse over new president, home ministry row
11 hours ago

Agitating IOM students stage sixth round of protest against Dean (Photo Feature)
4 hours ago
If you want to seek your property share, go to Baluwatar: MP Agrahari
5 hours ago