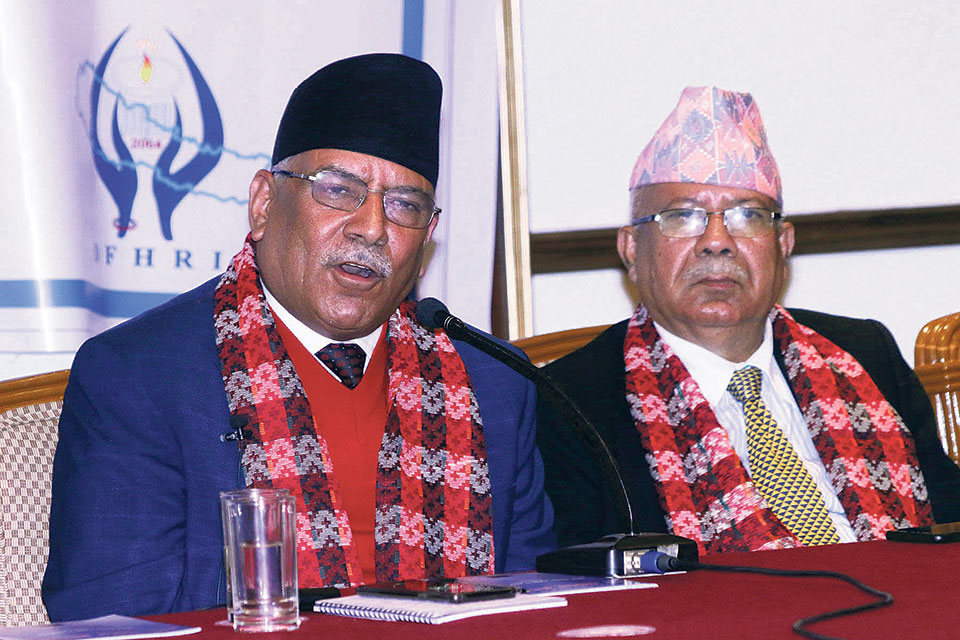 KATHMANDU, Nov 22: While the country marks the 13th anniversary of the Comprehensive Peace Agreement (CPA), thousands of conflict victims at the hands of both sides – the state and the Maoists – are still struggling for justice. They have accused the government of ignoring their years-long quest for justice.

Justice, according to conflict victims, has been delayed to “protect the perpetrators”.

Frustrated by the prolonged wait for justice, a group of conflict victims on Thursday staged demonstration in front of the rights bodies, rallied in the streets and at a public function reminded the leaders involved in the signing of the peace accord of the undelivered promises.

Conflict victims gathered at Maitighar Mandala  Thursday morning to express their frustrations. At the gathering, they demanded revision of the existing transitional justice (TJ) law and appointment of commissioners at the TJ bodies in a transparent manner so as to ensure that the human rights violators could be booked at the earliest.

They chanted slogans including, “Stop political and government interventions in the transitional justice process.”

Conflict victims are disappointed with the government after it didn’t heed their plea to revise the 2014’s Enforced Disappeared Inquiry, Truth and Reconciliation Commission Act before appointing commissioners in the TJ bodies. They are further unhappy as the government is working to appoint commissioners based on power-sharing among the big political parties.

“The government has been acting dishonestly. How long do we have to wait for justice?” asked Krishna Ghising,  who was seriously injured in a bomb explosion carried out by the Maoists targeting a moving bus in Halhale of Dolakha during the Maoist armed insurgency.

Shortly after staging protest near Singha Durbar, the central secretariat, conflict victims who have descended on the capital from various parts of the country rushed to the office of the National Human Rights Commission. They also staged a sit-in there demanding that the commission withdraw its representative from a committee which has been working to recommend candidates for the TJ bodies.

In the agreement signed on November 21, 2006 between the then Seven-Party Alliance and the rebel Maoists, both parties had agreed to promulgate a new constitution and manage the Maoist combatants for ending a decade-long Maoist insurgency. The agreement that was signed after over 17,000 people were killed in the conflict had also assured of forming TJ bodies within six months of signing the agreement and ensuring justice to conflict victims within two years.

But successive governments failed to prioritize the TJ process until Kumar Lama, a senior Nepal Army official, was arrested in London on the charge of torturing detainees during the insurgency.

After his arrest under international jurisdiction for human rights violation, major political parties agreed to form two TJ bodies — Truth and Reconciliation Commission and Commission of Investigation on Enforced Disappeared Persons –  in 2015 in an attempt to resolve conflict-era cases within the country.

The recommendation committee’s proposal to re-appoint previously discontinued CIEDP chiefs and members and some members of the TRC has also hurt conflict victims.

At an interaction organized to discuss the future course of the TJ process, former rebel Maoist chief Pushpa Kamala Dahal promised that former commissioners will not be re-appointed. “After listening to your views, I have reached the conclusion that all the commissioners in the TJ bodies will be new faces,” said Dahal.

Dahal, who is also one of the signatories to the Comprehensive Peace Agreement promised that the conflict-era cases will be settled as per international standards. “We are not in favor of blanket amnesty,” he said.

KATHMANDU, Jan 7: In a bid to restart the long-stalled transitional justice (TJ) process, the government is holding consultations with... Read More...

KATMANDU, Nov 24: Rift among conflict victims has widened with two groups coming up with separate approaches to resolving the... Read More...