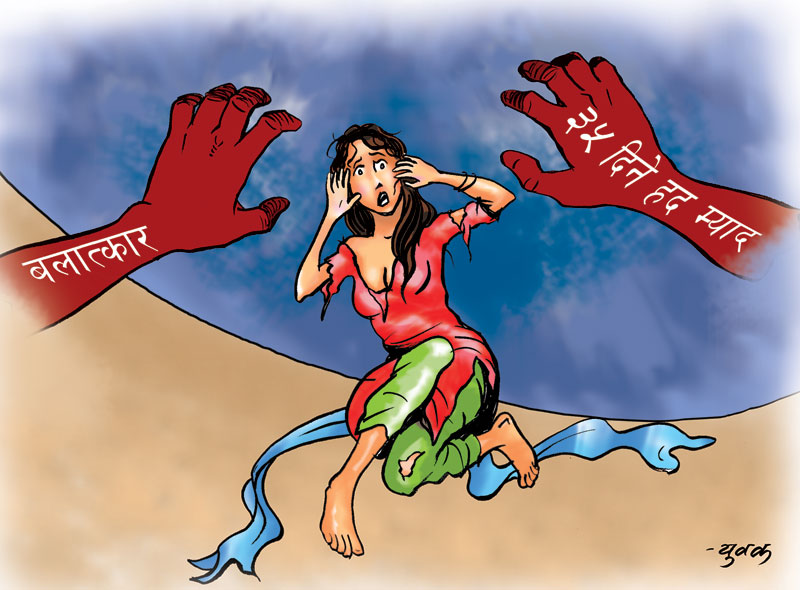 DANG, July 5: They were raped either by the state force or by the rebellions during the decade-long conflict in the country. Hope of getting justice had turned bleak over time due to the political instability in the post conflict era. However, as the peace and reconciliation committee is now seeking complaints from victims, growing number of rape victims from Dang, Rukum, Accham and Dailekh, among other districts have filed complaints.

According to the committee’s office in Dang, it has received six complaints of rape. Four of the cases put the blame on the state force while the two cases point fingers to the then rebels. According to Hemraj Adhikari, secretary of the Peace Committee in Dang, the rape victims have demanded strong action against the rapists. “All of the victims are highly concerned about bringing the culprits to justice. So far, six complaints have been received - four have blamed the state force and two accuse the rebels,” he said.

In Rukum, 30 rape cases have been filed demanding stern sentences for the rapists, which remain unidentified. Concerned officials informed that the complaints have not even pointed out if the rapists from the state side or belonged to the rebels. “Some have handed over the complaints wrapped in envelop and some have submitted open complaints. However, they have not stated whether the Maoists or the police and army forces were behind the crime,” said Raju Lamichhane, secretary at the local peace committee, Rukum. “All the thirty women had come in person here to register the complaints. All of them are quite vocal that the rapists should not be spared. Considering the trend, it seems we will be receiving more complaints demanding justice,” he added.

So far, the committee has received over 100 complaints related to rape cases from Rukum, Dang, Accham and Dailkeh districts. The committee officials believe that the number would cross by far though the victims now have just few days more to file such cases. “We feel the number will easily cross 100. Growing numbers of women are reaching out to our local offices,” said Manchala Jha, member of the committee.

After the rebels joined mainstream politics and the nation entered into peace process, conflict victims were provided with some relief. However, the victims did not include those raped. As per the data of the government, 14413 families of the deceased have received relief. Similarly, 1162 families of the missing were provided relief. Those who were extremely neglected were the rape victims though this nature of crime has been described as serious crime by the state. A decade has passed since the peace process started, but the rape victims were forced to remain quiet and helpless.

With the state neglecting their pain, the victims were forced into remaining silent. The fear of social exclusion always looms, when issues related to sexual violence that involves female comes to the fore. In number of cases, families of girls and women are forced to leave their place once they are known as rape victims. Some of these victims were forced into silence by their own families and communities.

According to the women who had come to the concerned offices to file complaints now, they gathered courage to speak about it just in hope of getting justice. “We want to see the rapists getting hard punishment,” one of the woman said. “We decided to file complaints against them just due to the hope that the state would give us justice,” she added.

“It is the first time the account of the rape victims have come to the fore,” said Jha. “They are not looking for any material relief. Such victims are eager to see the rapists getting punished for what they did,” she said. According to Jha, many women have personally asked her to take quick action against the guilty.

“Many women have asked for speeding up the investigation process so that they get justice soon. These women expressed eagerness to see their rapists punished for the crime they committed,” she said.

According to Jha, due to the sensitivity around the privacy of the victims, rape cases will be investigated little bit differently. “The commission is aware about its sensitivity. Rape cases are investigated differently. The victims and the accused are not dealt at one place or at the same time. They are handled in separately,” she said adding that victims will be dealing with female officers.

DHADING, Feb 14: On Saturday, Tara Air successfully conducted a test flight at the airfield at Kotbada in Kalikot district, but... Read More...