Concerns grow over 'death trap' roads of the capital 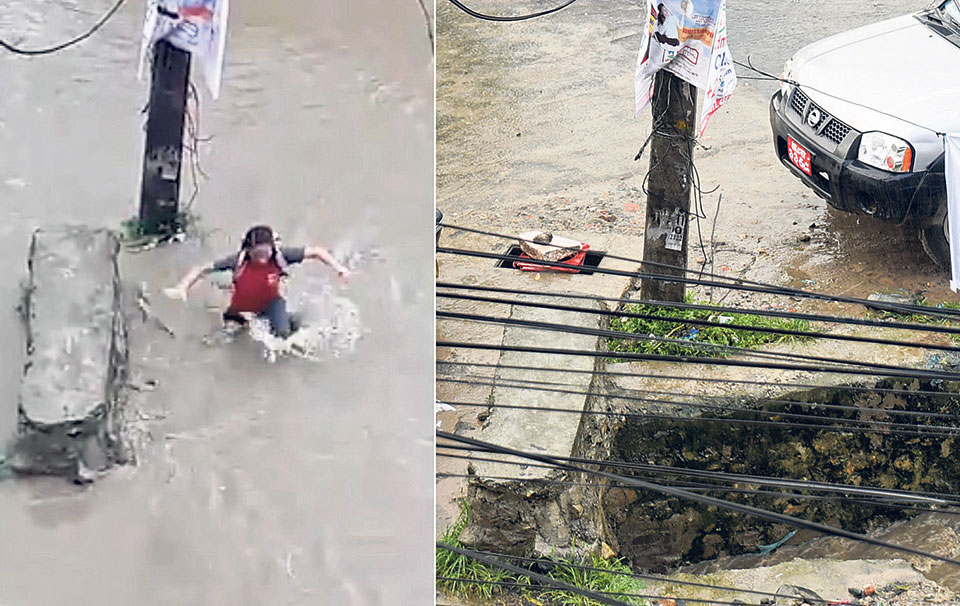 Water-logged roads killed one child while another narrowly escaped death

KATHMNDU, July 15: Roads in Nepal are treacherous and have rightly been dubbed as 'silent killers' as they claim lives of hundreds of people every year. Just on Friday, unmanaged road in the capital city's Nepaltar claimed the life of a child, while another child faced a near-death experience in Samakhusi of the valley due to the appalling condition of road.

On Friday evening, ten-year-old Binita Phuyal of Nepaltar was returning home from school when she got  caught in a heavy downpour all of a sudden. She failed to notice a sewage in the road and fell into it. The sewage washed her into the nearby Mahadev River and further down till Chaumati River after which she was rescued alive by her relatives and police. However, she died while undergoing treatment at Maharajgunj-based Tribhuvan University Teaching Hospital.

The terrible roads of Nepaltar get filled up with water during every monsoon giving a pond-like illusion and often leading to numerous accidents in the area, according to the locals. They informed that the road was dug for sewage construction, but have been left in terrible shape without any progress.

Similar incident took place at Samakhusi of Kathmandu on the same day. Satya Spkota, a 13-year-old student of Brihaspati Vidyasadan was heading home toward Ranibari through water-logged roads when she fell inside a manhole in the road. She then got washed through a sewage pipe until some distance, but was luckily rescued by onlookers.

According to head constable Murali Baral stationed at Samakhusi, the child luckily did not sustain any injury. The child's uncle Dependra Sapkota said the near-death experience has left Satya traumatized.

The video of the incident, by chance, was captured by a local resident and was uploaded in social media. Since then, the video has been making rounds in social media and has prompted stern criticism against concerned authorities for ignoring such terrible conditions of roads in the Valley.

Vehicles and pedestrians of the Valley have been facing such life-threatening incidents time and again. However, locals said all of those incidents do not come in light. The Valley's roads have been death traps to ubiquitous vehicles and pedestrians, who are forced to maneuver through gridlock traffic, navigate through treacherous roads full of potholes. Yet, the concerned departments remain unbothered and have continued turning blind eye to the plights of the people.

Pedestrian knocked down to death in capital

KATHMANDU, Jan 8: A pedestrian was killed after being knocked by a passenger bus at Bafal in Kathmandu on Sunday... Read More...