Complaint filed against singer Astha Raut for her 'indecent behavior'

KATHMANDU, Jan 17: A complaint has been filed against singer Astha Raut for her 'indecent behaviour'.

Police constable Ramita Shrestha lodged the complaint against Raut alleging the latter for her 'ill-treatment' to her while she was on duty at the domestic terminal of the Tribhuwan International Airport (TIA), Kathmandu on Wednesday.

Two days after the incident, police staffer Shrestha registered the complaint at the TIA security office today. Her complaint has been transferred to the Metropolitan Police Commissioner's Office, Ranipokhari seeking action against Raut.

In her complaint, Shrestha claimed that Raut misbehaved her using abusive words during a security check.

Following the incident, Raut posted a live video on Facebook, in which she apparently criticized the policewoman claiming that the latter misbehaved her. In the viral video, Raut is being seen quite furious while using some 'inappropriate' words too.

However, she removed the video after receiving harsh criticism on social media. Later on, she wrote on Facebook and apologized for the use of 'abusive language'. 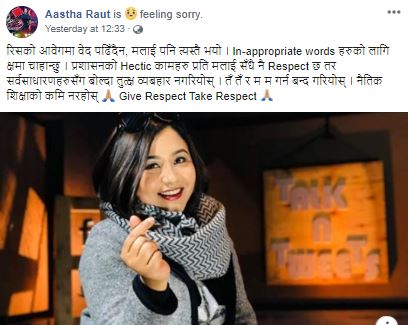 Similarly, in her another post on Facebook, she clarified it that her voice was against ill-treatment by police personnel not against entire police or army or any security institution.

KATHMANDU, Jan 28: Amid mounting pressure on the police administration from multiple quarters regarding the detention of singer Astha Raut,... Read More...

What happened with Astha Raut at TIA? (with video)

KATHMANDU, Jan 17: Even though singer Astha Raut claimed that she was harassed by an on-duty policewoman at the Tribhuvan... Read More...