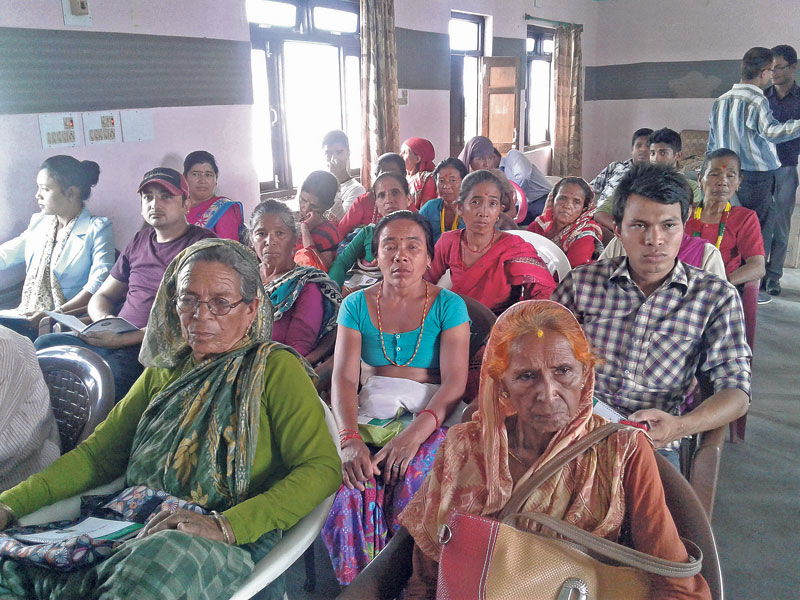 DANG, July  10: Rupa Nepali’s husband was relaxing at home when the rebels stormed in and took him away during the conflict era. Since than there has been no news about his whereabouts.

After the government announced to provide compensation only to the families of killed ones through Peace and Reconciliation Committee and did not announce any compensation for those who were forcefully disappeared, Nepali claimed that her husband had died in the conflict and had filed application at the District Administration Office seeking due compensation.

“The government had decided to give compensation only to deceased family, so I told my husband was dead. If I told truth, I would not get compensation,” said Nepali who has since corrected it. As the committee is collecting complaints from the conflict -era victims, Nepali has now revealed that the then rebels had taken away her husband from home and if possible, she wants him back. “Lured by compensation I told untruth then. Now, if possible, I would like to know about my husband’s whereabouts,” she added stating that he had gone missing in 2001.

Situation is not different in Rukum. As per the government data, none of the applications submitted were for missing. But coming now, over 50 families have come over seeking whereabouts of their disappeared members. Just like Rupa, they had also lied, lured by compensation.

According to Bijul Bishwokarma, member of the Commission on Disappearance, highest number of missing cases had been registered in Rukum. “So far, highest numbers of case have been filed in Rukum. Dang has pretty high number as well. The information provided by families earlier regarding the missing, dead or displaced status, is totally different to what they have provided now,” he said.

Organization of the families of missing in Dang, ‘Bepatta Pariwar Samaj’ had earlier recorded that there were over 70 persons missing, but since the government announced compensation to the family of deceased, the number dropped by half. “There was record of over 70 people as missing during conflict. When the government told that it would give compensation to the families of deceased, the number dramatically dropped,” said Rambahadur Thapa, president of the society. “Now only 39 missing are there in the list.” Since the Commission on Forceful Disappearance came into action, number of forcefully disappeared has been rising again.

In Dang, 113 persons have been listed as forcefully disappeared by the state and rebels. But the number is gradually on rise. According to Hemraj Adhikari, executive officer at Local Peace Committee, Dang, ‘dead turning into missing’ is the reason behind the change in data. “Those who earlier received compensation for their dead members have now been filing application seeking their information. We have received plenty of such cases,” he said. He added that the case must be similar throughout the country.

Meanwhile, Bishwokarma stated that around 3000 cases of disappeared have been filed across the country. “This number is three times higher than the government’s earlier data,” he said. “It’s pretty clear that most of the family members of the disappeared earlier received compensation under the category of the families of deceased,” he added.

Members of those missing during the conflict-era were no less affected than those who lost their family members. The incidences had badly weakened them emotionally and financially. However, the government whose family members died. Whose members disappeared was not thought of. And as hope of seeing their loved ones again was not promising, along with the need for compensation forced the families to file false complaints.
According to Bishwokarma, now the families of those missing are speaking truth as hope for justice is kindled somewhere. “In Rukum, I found nearly 20 people who told that they had lied earlier just for compensation. They were like - why to miss both compensation and family members. After all, the compensation provided addressed our immediate needs,” he said.
If a missing member does not come in contact even in 12 years, concerned family can register him or her as dead, as per legal provision and that allows them to transfer registration of immovable property from the dead to other. However, as the Article uses the word ‘missing’ in this regard, it does not apply to those ‘disappeared’. This has put the members of the commission in confusion. Dealing with the cases of disappeared or missing has become tough. “Even though we have been receiving complaints, we have a legal problem ahead. And we don’t a legal provision that helps to resolve the matter,” Bishwokarma said. He added that the concerned bodies need to think over it as to address the problem.

NEPALGUNJ, Jan 6: Khimu Maya Pathak of Kohalpur Municipality - 11 had been waiting for  news about her husband ever since... Read More...

They Stayed Put, but Their City Disappeared

SYRIA, Nov 23: On a cool evening in early November, in a back room of the Damascus Opera House, a... Read More...