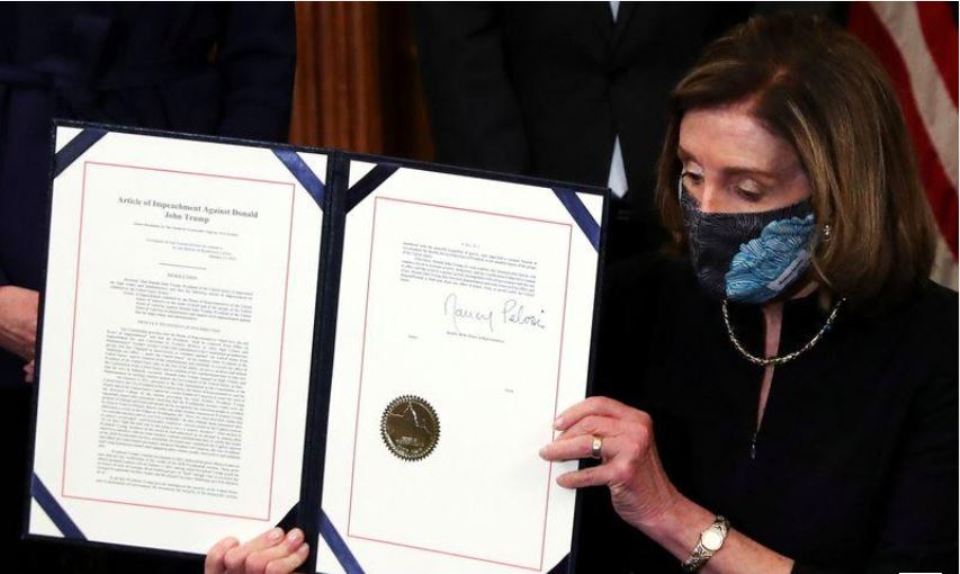 WASHINGTON, Jan 14: The below are comments concerning the House of Representatives vote on Wednesday that made Donald Trump the first U.S. president to be impeached twice.

“I hope that the Senate leadership will find a way to deal with their Constitutional responsibilities on impeachment while also working on the other urgent business of this nation. From confirmations to key posts such as Secretaries for Homeland Security, State, Defense, Treasury, and Director of National Intelligence, to getting our vaccine program on track, and to getting our economy going again. Too many of our fellow Americans have suffered for too long over the past year to delay this urgent work,” Biden said in a statement.

“Today, in a bipartisan way, this House demonstrated that no one is above the law - not even the president of the United States, that Donald Trump is a clear and present danger to our country, and that once again we honored our oath of office to protect and defend the Constitution of the United States, so help us God,” Pelosi said at the Capitol.

“Even if the Senate process were to begin this week and move promptly, no final verdict would be reached until after President Trump had left office. ... In light of this reality, I believe it will best serve our nation if Congress and the executive branch spend the next seven days completely focused on facilitating a safe inauguration and an orderly transfer of power to the incoming Biden Administration,” McConnell said in a statement.

“Donald Trump has deservedly become the first president in American history to bear the stain of impeachment twice over. The Senate is required to act and will proceed with his trial and hold a vote on his conviction. Despite the efforts of Donald Trump and violent insurrectionists, America is not a dictatorship.”

REPRESENTATIVE ADAM KINZINGER, ONE OF 10 REPUBLICANS WHO VOTED TO IMPEACH

“It was a sobering moment to vote in support of impeachment today; to walk over to the U.S. Capitol, our symbol of democracy, and recall the violent insurrection we witnessed here just one week ago. This is not a vote I took lightly, but a vote I took confidently. I’m at peace,” he said on Twitter.

REPRESENTATIVE TOM RICE, ONE OF 10 REPUBLICANS WHO VOTED TO IMPEACH

“I have backed this President through thick and thin for four years. I campaigned for him and voted for him twice. But, this utter failure is inexcusable,” Rice said on Twitter.

REPRESENTATIVE DAVID VALADAO, ONE OF 10 REPUBLICANS WHO VOTED TO IMPEACH

“President Trump was, without question, a driving force in the catastrophic events that took place on January 6 by encouraging masses of rioters to incite violence on elected officials, staff members, and our representative democracy as a whole,” he said on Twitter.

“Based on the facts before me, I have to go with my gut and vote my conscience. I voted to impeach President Trump. His inciting rhetoric was un-American, abhorrent, and absolutely an impeachable offense. It’s time to put country over politics.”

“You’ve got this impeachment hearing that’s being rushed through, and China, Russia and Iran - they’re watching the fact that we can’t even build a government. I mean this is the time where, you know, President-elect Biden needs to be putting Cabinet members in place and getting their government in place, and for me who has watched these countries and dealt with these countries, it’s very dangerous for our national security for them to see an impeachment process taking place and not building out a government.”

“We’ve got to get our priorities straight, stop the whining, stop the complaining, stop the finger-pointing and let’s get to work. That’s really what needs to happen,” Haley told Fox News.

WASHINGTON, Jan 14: Donald Trump on Wednesday became the first president in U.S. history to be impeached twice, as 10... Read More...