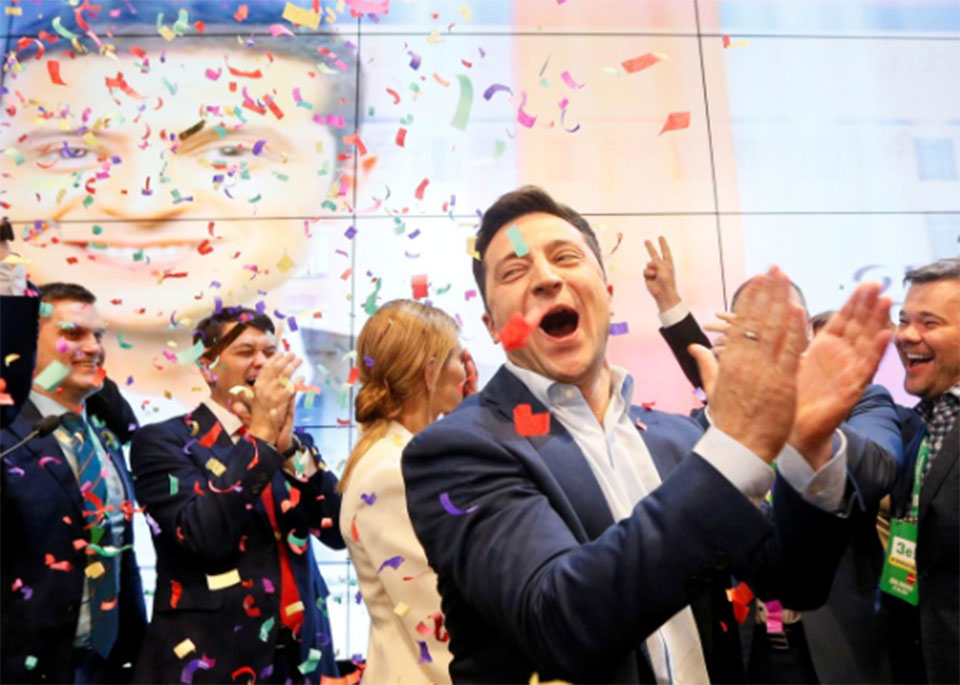 KIEV, April 22: Ukraine entered uncharted political waters on Sunday after exit polls showed a comedian with no political experience and few detailed policies had easily won enough votes to become the next president of a country at war.

The apparent landslide victory of Volodymyr Zelenskiy, 41, is a bitter blow for incumbent Petro Poroshenko who tried to rally Ukrainians around the flag by casting himself as a bulwark against Russian aggression and a champion of Ukrainian identity.

Zelenskiy, who plays a fictitious president in a popular TV series, is now poised to take over the leadership of a country on the frontline of the West’s standoff with Russia following Moscow’s annexation of Crimea and support for a pro-Russian insurgency in eastern Ukraine.

Declaring victory at his campaign headquarters to emotional supporters, Zelenskiy promised he would not let the Ukrainian people down.

“I’m not yet officially the president, but as a citizen of Ukraine, I can say to all countries in the post-Soviet Union look at us. Anything is possible!”

Zelenskiy, whose victory fits a pattern of anti-establishment figures unseating incumbents in Europe and further afield, has promised to end the war in the eastern Donbass region and to root out corruption amid widespread dismay over rising prices and sliding living standards.

But he has been coy about exactly how he plans to achieve all that and investors want reassurances that he will accelerate reforms needed to attract foreign investment and keep the country in an International Monetary Fund program.

“Since there is complete uncertainty about the economic policy of the person who will become president, we simply don’t know what is going to happen and that worries the financial community,” said Serhiy Fursa, an investment banker at Dragon Capital in Kiev.

“We need to see what the first decisions are, the first appointments. We probably won’t understand how big these risks are earlier than June. Perhaps nothing will change.”

The United States, the European Union and Russia will be closely watching Zelenskiy’s foreign policy pronouncements to see if and how he might try to end the war against pro-Russian separatists that has killed some 13,000 people.

Zelenskiy said on Sunday he planned to continue European-backed talks with Russia on a so far largely unimplemented peace deal and would try to free Ukrainians imprisoned in Russia, which is holding 24 Ukrainian sailors among others.

Viktor Medvedchuk, the Kremlin’s closest ally in Ukraine, last week outlined ways in which Ukraine and Russia could mend ties, though Zelenskiy has given no indication of being open to the prospect.

An emotional Poroshenko conceded defeat to his supporters, some of whom were crying.

Although he said he accepted the loss, he said he would not leave politics and that Zelenskiy would face strong opposition, a reminder that Zelenskiy will have to work with a sometimes volatile parliament before it is re-elected in October.

Zelenskiy has pledged to keep Ukraine on a pro-Western course, but has sounded less emphatic than Poroshenko about possible plans for the country of 42 million people to one day join the European Union and NATO.

Poroshenko said on social media he thought Zelenskiy’s win would spark celebrations in the Kremlin.

“They believe that with a new inexperienced Ukrainian President, Ukraine could be quickly returned to Russia’s orbit of influence,” he wrote.

Zelenskiy has rejected those accusations.

One of the most important and early tests of that promise will be the fate of PrivatBank, Ukraine’s largest lender, which was nationalized in 2016.

The government wrested PrivatBank from Kolomoisky as part of a banking system clean-up backed by the IMF, which supports Ukraine with a $3.9 billion loan program.

But its fate hangs in the balance after a Kiev court ruled days before the election that the change of PrivatBank’s ownership was illegal, delighting Kolomoisky but rocking the central bank which said it would appeal.

Zelenskiy has repeatedly denied he would seek to hand PrivatBank back to Kolomoisky if elected or help the businessman win compensation for the ownership change.

The IMF will be watching closely too to see if Zelenskiy will allow gas prices to rise to market levels, an IMF demand but a politically sensitive issue and one Zelenskiy has been vague about.

Zelenskiy gave few new policy details on Sunday, but said he wanted a new general prosecutor to replace incumbent Yuriy Lutsenko, and spoke of wanting new generals to work in the army.

His unorthodox campaign traded on the character he plays in the TV show, a scrupulously honest schoolteacher who becomes president by accident after an expletive-ridden rant about corruption goes viral.

Zelenskiy has promised to fight corruption, a message that has resonated with Ukrainians fed up with the status quo in a country that is one of Europe’s poorest nearly three decades after breaking away from the Soviet Union.

Landslide in Chwaseghari buries a village

DOLAKHA, August 4: It was around 11 pm on Friday when Tika Bahadur Khatri, a local teacher in Aplepu of Gaurishankar... Read More...

Is anti-sedition law killing journalism in the northeast?
17 hours ago

Lack of vaccination, tests creates room for variants in Nepal
20 hours ago