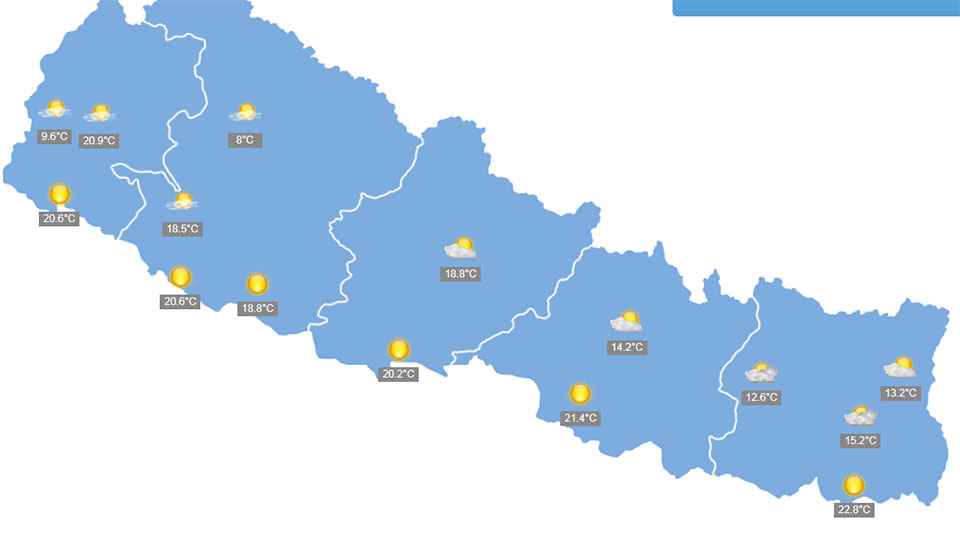 KATHMANDU, Dec 27: The cold weather has gripped the Kathmandu Valley with temperature 5.5 degree Celsius on Thursday.

It was even colder yesterday with temperature 1.5 degrees Celsius in the capital.

According to Shanti Kandel, the meteorologist at the Department of Hydrology and Metrology, the temperature is likely to go down tomorrow.

Jumla records the lowest tempter with -6.2 degree Celsius today while the maximum temperature was recorded at 24.7 degree Celsius in Nepalgunj yesterday.

The weather is partly to generally cloudy in the hilly regions and mainly fair in the rest of the country today.

Light rain is likely to occur at one or two places of the western hilly region.

There is possibility of light snowfall at one or two places of the high mountainous region, according to Meteorological Forecasting Division (MFD).

Similarly, partly cloudy is expected in the hilly regions and mainly fair in the rest of the country tonight

CHICAGO, Jan 2: The dangerous cold and heavy snow that hobbled the northern U.S. this week has retreated, but not... Read More...

Import of sanitizer sees a significant decline in the first two months of the current FY
16 hours ago
U.S. offers payments, relocation to family of Afghans killed in botched drone attack
20 hours ago

Two killed in bus-motorcycle head on collision
15 hours ago