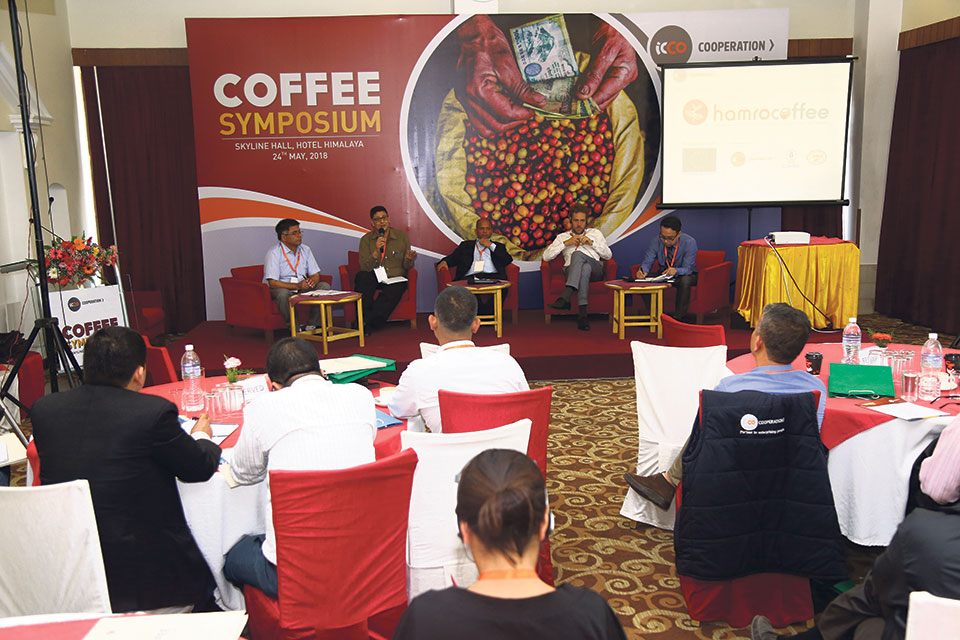 KATHMANDU, May 25: Coffee entrepreneurs claim that Nepali coffee industry is not growing as expected due to lack of training and awareness among farmers regarding coffee farming, pulping and processing. They also say that many farmers are not aware of the right time to pluck cherries from the trees and are uninformed about the varieties of coffee seeds available in the market.

In a ‘Coffee Symposium’ organized by the European Union funded HAMRO COFFEE project under ICCO Cooperation Farmers, exporters, officials of coffee cooperatives, investors and stakeholders alike agreed to the fact that farmers are in need of proper trainings.

Speaking during a panel discussion, Mandu Thapa, chairperson of the District Coffee Cooperative Union, Sindhupalchowk, stated: “It has been over a decade since coffee farmers were given trainings. Thus it is very important that trainings are once again conducted in coffee producing areas of the country. Moreover as new technologies have been introduced, training to farmers and workers at pulping factories is a must.”

Farmer and coffee technician, Kul Chandra Adhikari of Kaski, also said that farmers must be given proper training as they have not been following instructions of technicians. “This is mainly because they do not understand the essence and reason behind these instructions,” he said, and added: “While it is important to encourage all farmers, farmers who just cultivate a few bushes do not seem serious due to a small risk factor. Therefore, it is important that we drive our attention especially to large scale coffee farmers.”

Meanwhile, Willem Grimmink, founder of One to Watch, which has been investing on coffee farms such as the Alpine Coffee Estate Pvt Ltd, say that there is a huge gap between what the farmers receive from selling coffee to what the consumers have to pay.

“The supply chain for coffee in Nepal is not transparent. While we have to pay hundreds for a cup of coffee in Kathmandu, what farmers receive is surprisingly low. Farmers thus don’t have the incentive or motivation to give their best to produce high quality coffee,” he added.

During the event, Sheshkanta Gautam, executive director of the National Tea and Coffee Development Board, told Republica that while Nepali coffee industry has great potential and coffee lovers have been increasing in Nepal, the drink was considered luxury and something used only by foreigners.

“Furthermore, although 30,000 farmers are involved in coffee farming, a majority of them just have a few bushes. Nepali coffee farmers have not been able to earn their daily bread via coffee farming alone,” he said. “However, it is important to concentrate on quality over quantity of coffee produced to generate better income.”

ILAM, June 10: Tea farmers of Ilam are finding it difficult to market organic tea produced in their farm for the... Read More...

DHANGADHI, Oct 27: Ram Gulabi Chaudhary is worried these days after irrigating the land that he had leased to cultivate barley... Read More...