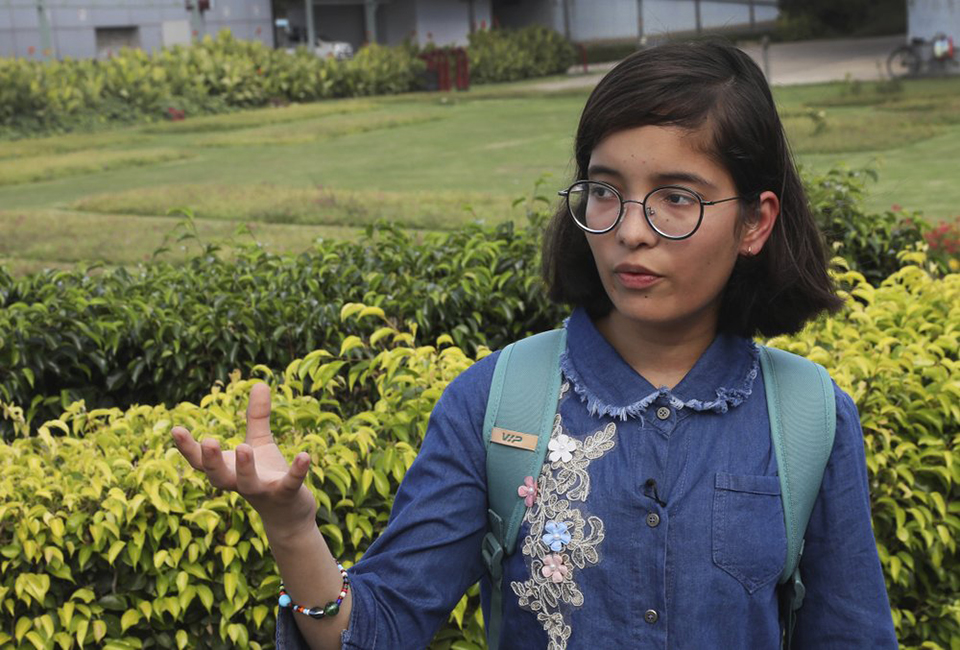 In this Thursday Sept. 26, 2019, photo, Ridhima Pandey, 11, child climate activist talks to the Associated Press upon her arrival from New York at the Indira Gandhi International airport, in New Delhi, India. Ridhima, who was among the 16 young activists filing a complaint at the United Nations accusing countries of inaction on climate change, has taken that step before. Pandey filed a petition in 2017 at India's National Green Tribunal, which oversees environmental concerns, for not taking serious enough steps to combat climate change. It was dismissed, but she escalated it to the Indian Supreme Court. (AP Photo/Manish Swarup)

NEW DELHI, Sept 27: An Indian girl who was among the 16 young activists filing a complaint at the United Nations accusing countries of inaction on climate change has taken that step before.

Ridhima Pandey, now 11, filed a petition in 2017 at India’s National Green Tribunal, which oversees environmental concerns, for not taking serious enough steps to combat climate change. It was dismissed, but she escalated it to the Indian Supreme Court.

Pandey was among the activists including Swedish teen Greta Thunberg who criticized Germany, France, Brazil, Argentina and Turkey for failing to uphold their obligations to young people under the U.N.’s Convention on the Rights of the Child.

“If we take this matter to the global level, I think that global leaders will not ignore us,” Pandey said at New Delhi’s airport on Thursday after arriving back in her home country.

Pandey spoke passionately about her experience in New York. She said people often tell her she is too young to be an activist, but she doesn’t think she is wrong because other children from other countries are “asking for the same.”

She said the best parts of her trip were filing the complaint and then attending a global climate strike last Friday. There were protests in several Indian cities including New Delhi, Mumbai and Kolkata that day.

Pandey is from Haridwar, a holy city on the Ganges River, which has been extremely polluted her entire life.

“The government said they cleaned it but it’s not true,” she said. “We say the Ganga is mata (mother), that Ganga is a goddess for us, and we just pollute it.”

She said she regularly finds statues, clothes and plastic on its banks.

Pandey’s interest in the climate started in 2013, when huge floods devastated Uttarakhand state in northern India. Her father, Dinesh Pandey, a wildlife conservationist, began explaining issues like global warming to her because she asked endless questions about the natural disaster.

“We (adults) just talk a lot,” said Dinesh Pandey, who accompanied his daughter to New York. “This is not right. They are betraying the future generations. I am standing with my daughter, and I am proud that my daughter is standing with everyone on the global level in this mission.”

“I don’t think our government is fulfilling all of its Paris agreement (climate) responsibilities,” said Ridhima Pandey, pointing out India’s continuing dependence on fossil fuels.

“It makes me very angry,” she said. “They shouldn’t concentrate just on development. What will we do with all this development if we are not going to have a future?”

She pointed to single-use plastics as an area in which ordinary Indians can make a difference.

“If you want to help, I would say first of all support (our movement), and second of all stop using plastic products,” she said. She marveled at the reusable steel straws that she saw people using in New York.

“If we don’t use it, companies will stop making it,” she said of plastics.

The Indian government is expected to announce a single-use plastics ban next week.

Pandey is starting her own nonprofit group for climate advocacy.

“I don’t want to suffer, because it’s our right to have cleaner water, to live in a healthy environment, to have cleaner air,” she said. “And they” — governments around the world — “are violating our rights.”

BERLIN, Sept 24: With global temperatures rising, superstorms taking their deadly toll and a year-end deadline to firm up the... Read More...