Classrooms on the 'verge of collapse' 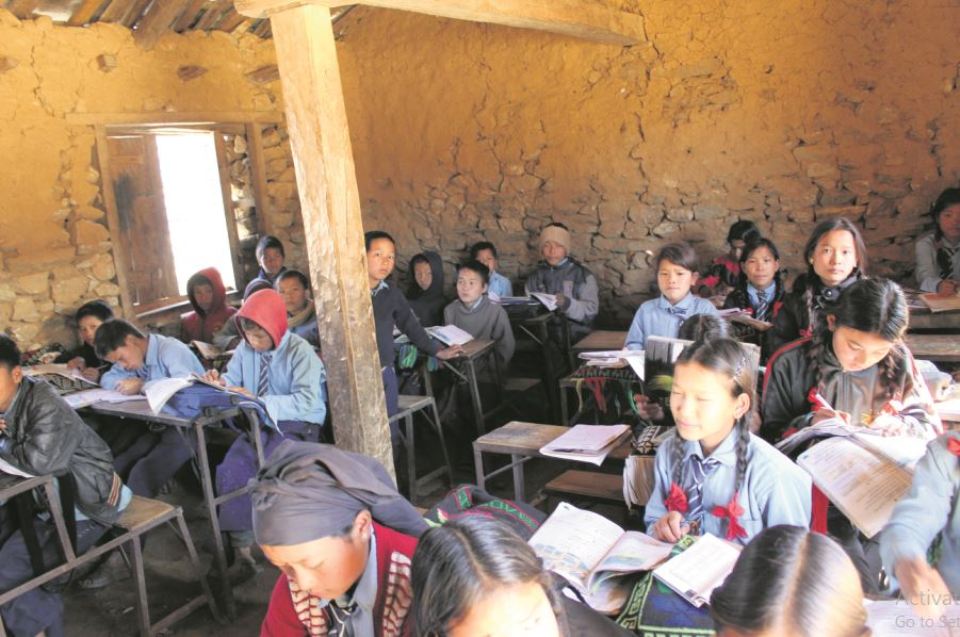 ROLPA, Jan 14: Built with mud and stones decades ago, the classrooms of Saraswati Secondary School in Pang, a remote village of Rolpa, are not safe anymore. It looks like the structures could collapse anytime, and the school principal feels no different. However, in the lack of budget to erect new buildings, the school with over 500 students has been running classes in the dilapidated rooms.

"This matter has been disturbing me. I know the rooms are not safe at all," said principal Umesh Pun Magar. "But we have no idea what else can be done. We don't have enough budget to seek other alternatives. Classes are being run at the same rooms," he added.

Students from nursery to grade 10 remain in the school for over six hours every day. Except for the break time, they attend classes inside the dilapidated rooms. According to Magar, a total of 553 students have been admitted to the school this year though many students do not come to school regularly.

"Children from poor families are less likely to come to school. They don't get conducive environment for proper education. On the other hand, the condition of our school is equally pathetic," lamented Magar, adding that such institutions are even more neglected in rural areas.

The school administration informed that they have not come across any monitoring team ever. Officials from the education department have never visited them.

"Had they visited us time to time to check our condition, maybe the problems could have been noticed by the government. But nobody cares. Water seeps from the building when it rains and the floor turns muddy," reported another teacher of the school Kyuri Gharti. "We fear so much for ourselves and for the children. None of us are safe here," she added.

Gharti fears that the stones could crush the children or the teachers anytime. She says there is a high probability of such an accident. Equally concerned is another teacher at the school Ram Prasad Pun.

"Neither can we stop classes, nor are we able to do anything about this situation. We are constantly worried instead of focusing on studies," he remarked.

The teachers say the risk escalates during the monsoon. Rains are sure to further weaken the structures. Amid impending fear of massive disaster in the education institution, the local representatives say that 'it will take a few months to solve the problem'.

Durga Bahadur Khadka, chairperson of Lungri Rural Municipality – 1, said that the school will get a new building in a few months.

"We have already taken initiative for this. The problem will be solved within this fiscal year," he said.

NAC bringing back Boeing aircraft after maintenance in Malaysia

KATHMANDU, Jan 14: A Boeing aircraft of Nepal Airlines Corporation (NAC) that was taken to Malaysia for repair around two... Read More...

KATHMANDU, July 14: Though it has already been two weeks since a canal of Sikta Irrigation Project crumbled, the government... Read More...