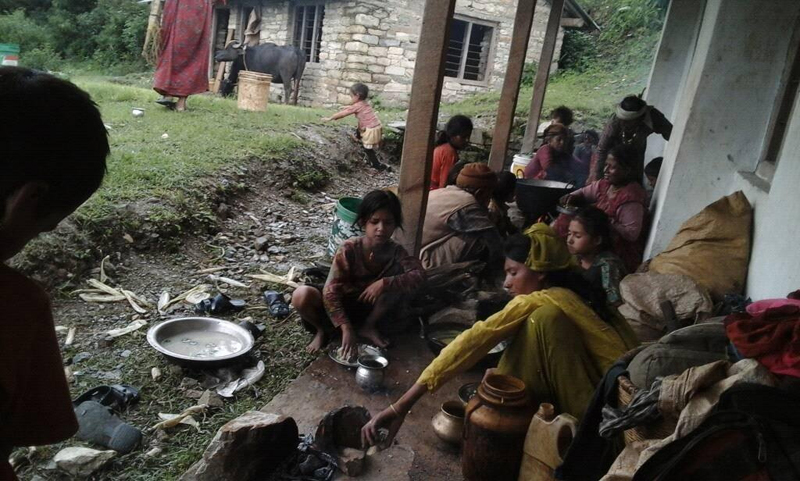 Seven families displaced after their homes in Talladehi, Baitadi district collapsed due to sinkholes have been living in a school, which has not been able to run classes because of their presence.

BAITADI, Aug 18: A school in Dadakhali of Baitadi district has remained shut since last week after locals displaced by rain-induced sinkhole started taking shelter there.

Massive sinkhole in Dadakhali of Talladehi-8 on August 5 has completely swallowed five houses and displaced 52 families of the village. Some of the displaced locals have taken shelter in their relative's home while some others have been living in makeshift tents constructed in their farms.

Among the displaced, seven families have taken shelter at Lokhadi Primary School. This has prevented over 200 students of the school from attending their classes.

“Seven families are taking shelter in the school due to which we haven't been able to operate classes,” said Man Bahadur Dhami, the school principal.

According to the principal, the displaced families have also brought their cattle along with them to the school. This has made the school environment very dirty. There are lots of cow dung and other waste materials thrown on the school premises.

Failure to reopen the school has deeply worried parents. Although the monsoon vacation ended a week ago, the school has not been able to reopen. Parents have expressed concern for their children's education.

“We were planning to hold exams after the end of monsoon vacation. But now we have no choice but to postpone all the examinations,” said Dhami. “The displaced victims sheltering in the school have nowhere else to go at the moment. We will not be able to reopen the classes unless they are relocated elsewhere,” he added.

Meanwhile, District Education Officer Lal Singh Ter has assured that he will do everything in his capacity to resume the classes at the earliest. “I'll hold discussion with the Local Development Officer and see if we can relocate the displaced victims elsewhere and reopen the school,” he said.

The District Administration Office (DAO), Baitadi, informed that a technical team would be deployed within a few days and the victims will be shifted elsewhere. “We have already taken initiatives to relocate the victims from the school,” said Kishwar Kumar Chaudhary, chief of the DAO.

RUKUM, April 8: A school in the district is running its classes in the temporary sheds of the zinc sheet. Read More...